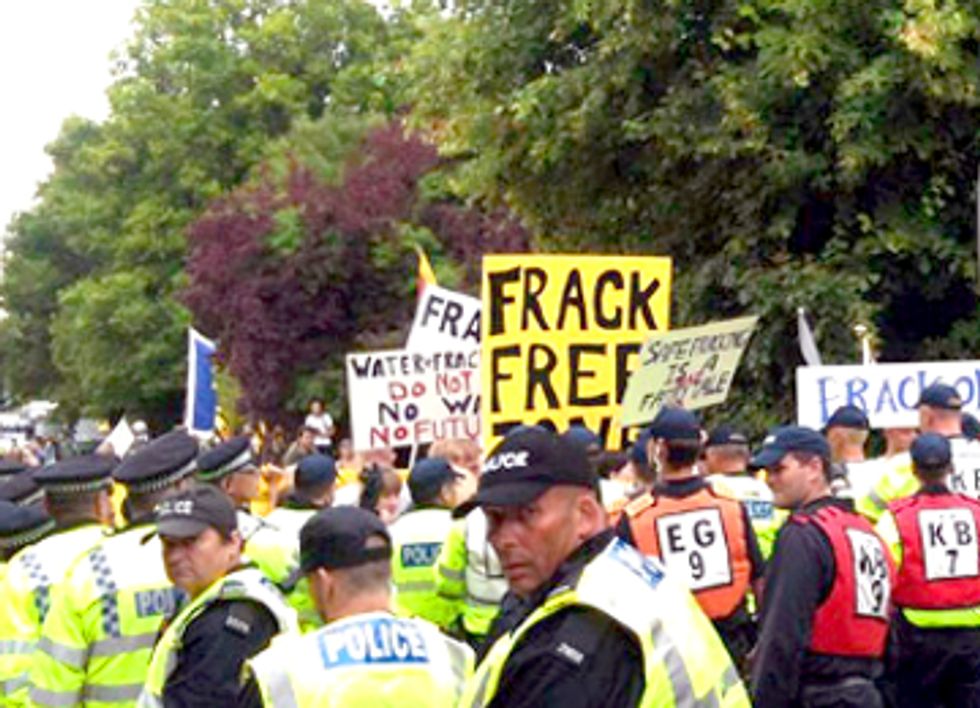 As protests over shale gas continue to grow in the UK, it has been revealed that half of Britain’s cabinet ministers could see fracking in their constituencies, a revelation expected to deepen the political row over the process.

Analysis of the 176 onshore oil and gas drilling licenses issued by the Department for Energy and Climate Change—put together by Greenpeace—has shown that up to 13 members of the cabinet could see exploratory drilling in their seats over coming years.

Earmarked for “petroleum exploration development,” many of the licenses refer to shale sites, although others could generate conventional oil and gas.

The analysis follows comments from Osborne calling on fellow Conservative Members of Parliament (MPs) to support shale gas—even in their own constituencies.

But ahead of the 2015 election, some politicians are worried about the potential for further protests to spring up, like those taking place in Balcombe, West Sussex.

Lawrence Carter of Greenpeace said the government should expect more protests like these in the future:

MPs should brace themselves for a significant voter backlash if they allow fracking to be forced on their constituents. People won’t take the disruption of their communities and countryside lying down.

Some politicians including Osborne have been openly enthusiastic about the process and the Treasury has recently offered generous tax breaks to encourage the industry—which could see an even larger round of licensing next year.

Energy Minister Michael Fallon has also spoken out in favor of shale gas exploration, and has publicly commented that “claims exploration involves ruining the countryside are nonsense.” Other coalition members have, however, been less excited.

In the first major, public attack on fracking, Tim Farron, the Liberal Democrat’s president spoke out over the weekend warning that it risks “damaging the countryside” for decades.

And in private Fallon has also raised concerns that fracking might face fierce resistance, particularly as exploration moves to the south of England.

Such comments may seem unsurprising as the protests in Balcombe look set to intensify.

As Caudrilla began test drilling on the site, this week, the residents made a fresh vow to oppose the company’s activities in the region, fearing possible side-effects such as groundwater contamination, subsidence and earth tremors, as well as the more immediate threat of noisy trucks rumbling through the village.

Next week, thousands more protesters could descend on the leafy, West Sussex village, as local protestors are set to be joined by UK campaign group No Dash for Gas—as they hold a five-day action camp at the site.

The Reclaim Your Power camp was intended to take place in Nottinghamshire, but has been moved to Balcombe as a sign of solidarity with the local campaigners.

Protesters in Balcombe used an old fire engine to block access to the drill site. Photo credit: Frack Off

The group protests against the government’s "dash for gas" and gained widespread attention last August when they shut down a power station in West Burton for seven days. As the two groups link, they say over a thousand people could join the camp.

Ewa Jasiewicz from the No Dash for Gas campaign told Responding To Climate Change:

Fracking is an integral part of the wide No Dash for Gas protest. Fracking is about extraction, the big gas power stations are about processing and at the moment most of our gas is coming from Egypt, Qatar, Nigeria. In the future, the government plan would be to have more gas locally produced.

Our argument is that we can’t have any gas, because it’s a dirty fossil fuel that’s going to crash our climate change targets and increase fuel poverty, so it’s part of the same fight.

Government planning documents have stressed that local authorities should ignore these growing fracking protests and instead recognize mineral extraction as “essential to local and national economies,” banning then from considering whether renewable energy plants would be a better fit for their communities when receiving fracking applications.

But as the government aims to ignore the wave of protests against shale gas in the UK, protests are only set to get louder.

This weekend anti-fracking groups even plan to take their concerns to the government’s doorstep, with plans to picket Downing Street.