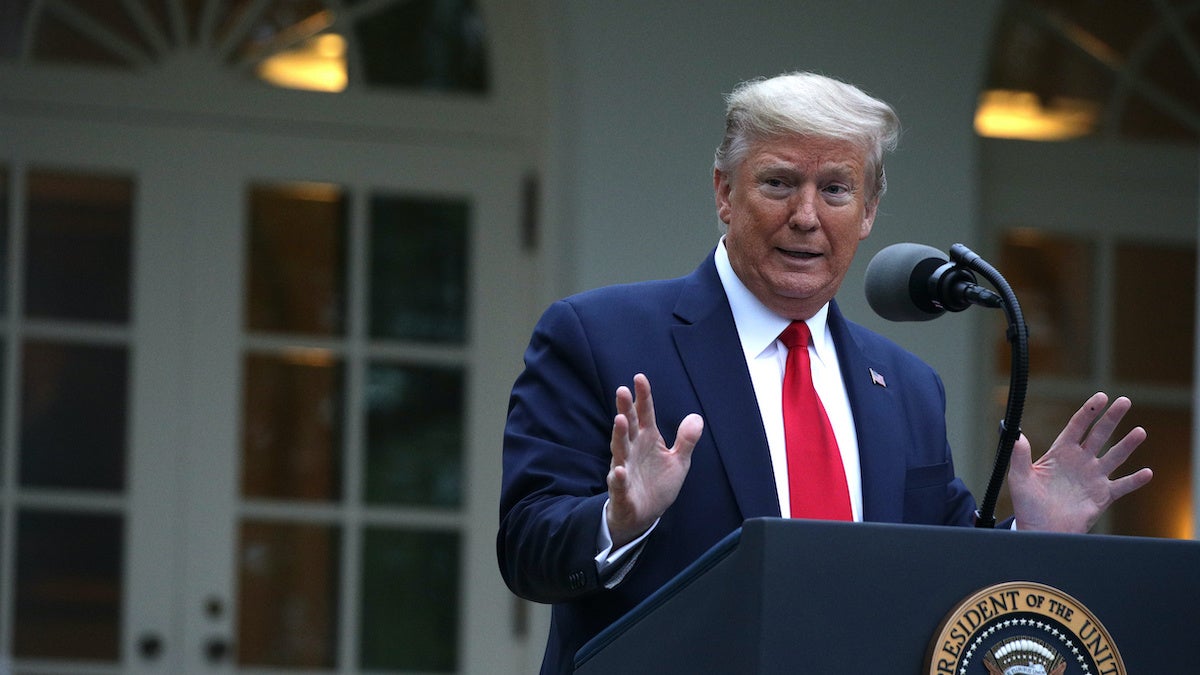 President Donald Trump speaks at a White House press briefing in which he announced his decision to pause funds to the World Health Organization. Alex Wong / Getty Images

In a move roundly decried by public health experts, President Donald Trump announced Tuesday he would halt U.S. funding for the World Health Organization (WHO) as his administration investigates the international body’s handling of the coronavirus pandemic.

Trump claimed the agency trusted the information coming out of China in the early days of the outbreak too easily, but his actions come as he tries to deflect criticism of his own response to the pandemic that has sickened more than 600,000 in the U.S. and claimed nearly 25,000 U.S. lives. His announcement also follows a weekend that saw the U.S. death toll rise to become the highest in the world, as well as the release of a major New York Times investigation revealing Trump implemented social distancing measures weeks after his own health experts thought they were necessary. More Americans now disapprove of Trump’s handling of the virus than approve, The New York Times pointed out.

“It is a transparent attempt to shift blame for the U.S. administration’s own failings,” Center for Global Development senior policy fellow and former U.S. Agency for International Development disaster relief head Jeremy Konyndyk told Science of Trump’s decision to pause funding. He also said the freeze “leaves the U.S. and the world less safe.”

President @realDonaldTrump is halting funding of the World Health Organization while a review is conducted to assess WHO's role in mismanaging the Coronavirus outbreak. pic.twitter.com/jTrEf4WWj0

“So much death has been caused by their mistakes,” the president told reporters.

One of his major criticisms is that the agency accepted Chinese accounts of the virus too readily. But The New York Times pointed out that Trump himself praised the Chinese response in January while he was negotiating a trade deal with the country.

“China has been working very hard to contain the Coronavirus. The United States greatly appreciates their efforts and transparency,” he tweeted Jan. 24. “It will all work out well. In particular, on behalf of the American People, I want to thank President Xi!’

Other countries have raised concerns about the speed with which WHO responded to the virus. For example, the agency did accept the news from China in mid-January that the virus did not pass from person to person. But it also gave out warnings during that month about the new illness.

A senior scholar at the Johns Hopkins University Center for Health Security, Dr. Amesh Adalja, told Reuters that while WHO may have made some errors, it still was doing vital work to control the spread of the new disease.

“It’s not the middle of a pandemic that you do this type of thing,” he said.

Even other members of the administration agree. Trump made his announcement despite the opposition of top health officials, who were concerned it would hamper international efforts to fight the virus that causes COVID-19., an anonymous official told Reuters.

The U.S. is the country that contributes most to WHO. In 2019, it gave more than 0 million, around 15 percent of the agency’s budget. Its funding pause comes as the agency is appealing for more than a billion in extra funds to fight the virus.

Trump said he expects his review to take 60 to 90 days, but it comes as WHO is working to fight the virus in less developed countries who are less prepared to cope with its spread. On Tuesday, the first WHO “solidarity flight” took off from Ethiopia carrying essential health supplies to African countries, Science pointed out.

“WHO is in the middle of supporting global surveillance efforts and scale-up of testing and response in low- and middle-income countries around the world,” Georgetown University global health researcher Matthew Kavanaugh told Science. “Hobbling that response is not just unjust, it’s incredibly bad for U.S. public health at a moment when we have all learned painfully how easily this virus moves from abroad to U.S. shores.”