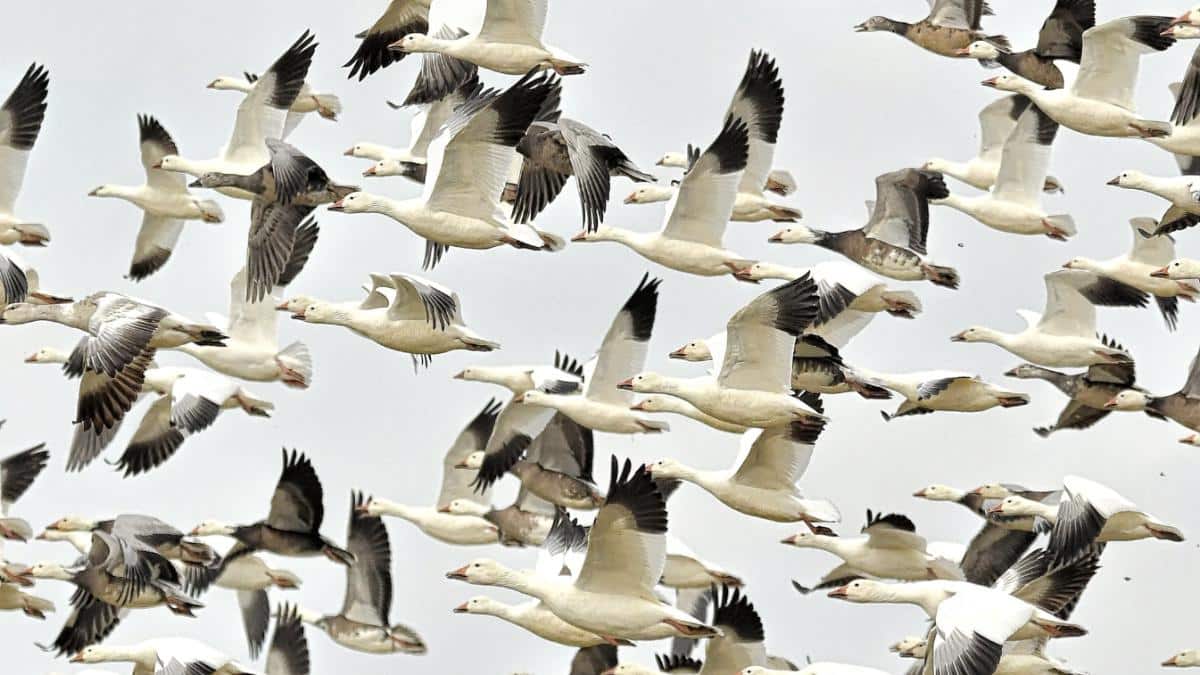 The U.S. Fish and Wildlife Service will no longer penalize or prosecute companies when their actions cause the inadvertent death of birds. Jeff R Clow / Getty Images

Just over two weeks before President Donald Trump is set to leave the White House, his U.S. Fish and Wildlife Service on Tuesday finalized a rollback of the Migratory Bird Treaty Act—a law that’s been in place since 1918 and which conservation groups credit with holding corporate polluters accountable for harming bird species.

In what the Western Values Project called a “parting gift to Big Oil by corrupt former oil lobbyist Interior Secretary David Bernhardt,” the USFWS announced a new rule under which the federal government will no longer penalize or prosecute companies when their actions cause the inadvertent death of birds.

In the case of oil spills like the Deepwater Horizon disaster, which killed more than one million birds in 2010; electrocutions by power lines; ducks and other species stuck in fossil fuel tailings ponds; and illegal actions like the spraying of banned pesticides, companies will no longer be held to account as long as they don’t intentionally kill birds.

Antithetical to its purpose, US Fish and Wildlife Service finalized a rule rolling back protections for migratory birds, according to a document to be published in the Federal Register this week. https://t.co/Q2xrbW3RBg

When it was passed into law more than 100 years ago, the Migratory Bird Treaty Act (MBTA) made it illegal to hunt, take, capture, or kill birds from endangered species “by any means or in any manner.”

Bernhardt said Tuesday the new rule “reaffirms the original meaning and intent of the Migratory Bird Treaty Act,” while the Center for Western Priorities called it a “radical interpretation of the law.”

“The Trump administration wants to make sure extractive industries can continue to kill birds after they leave office,” said Jennifer Rokala, executive director of the group. “Secretary Bernhardt’s former oil industry clients have explicitly asked for this policy change, and now he is delivering, just days before returning to the private sector. By finalizing this proposal, the Trump administration is signing the death warrants of millions of birds across the country.”

Conservation groups pointed to data showing that three billion birds have been lost in North America since 1970, while six million fewer birds were counted by the Audubon Society in 2019 than previous tallies showed.

As Common Dreams reported in September, the wildfires that overwhelmed the West Coast last year were thought to be behind the deaths of thousands of migratory birds in the southwest.

“This brutal blow hits America’s birds when many populations are already plummeting, so it’s really the last thing they need,” said Noah Greenwald, endangered species director at the Center for Biological Diversity. “Trump officials are giving oil companies and other polluters a license to kill birds. Vast numbers of birds will be electrocuted by power lines, drowned in oil waste pits and killed in other easily preventable ways.”

Advocates say the MBTA has worked in recent years to show the oil and gas industry that it will be held accountable if its activities kills birds. The federal government reached a 0 million settlement with BP after the Deepwater Horizon disaster.

Rep. Deb Haaland (D-N.M.), who was named as President-elect Biden’s nominee for Interior Secretary last month, is expected to repeal the USFWS’s rule, but that process could take time. Meanwhile, Rep. Alan Lowenthal (D-Calif.) introduced the Migratory Bird Protection Act last year as the administration was considering the rollback, with the aim of reaffirming the original law’s intent of protecting vulnerable birds—not corporations.

Advocates also expressed hope that the federal courts will strike down what Greenwald called the Trump administration’s “reckless attack on one of America’s oldest and most important conservation laws,” as Judge Valerie Caproni of the Southern District of New York did in August.

“There is nothing in the text of the MBTA that suggests that in order to fall within its prohibition, activity must be directed specifically at birds,” Caproni said in her ruling at the time. “Nor does the statute prohibit only intentionally killing migratory birds.”

The Trump administration is kicking off the new year and its remaining weeks—and, to add insult to injury, #NationalBirdDay—by finalizing its illegal bird-killer policy. #ProtectTheBirds https://t.co/kwA6kY3A7m

Jamie Rappoport Clark, president and CEO of Defenders of Wildlife said the group would call on the Biden administration “to restore protections for birds immediately and affirm that the Migratory Bird Treaty Act prohibits incidental take.”