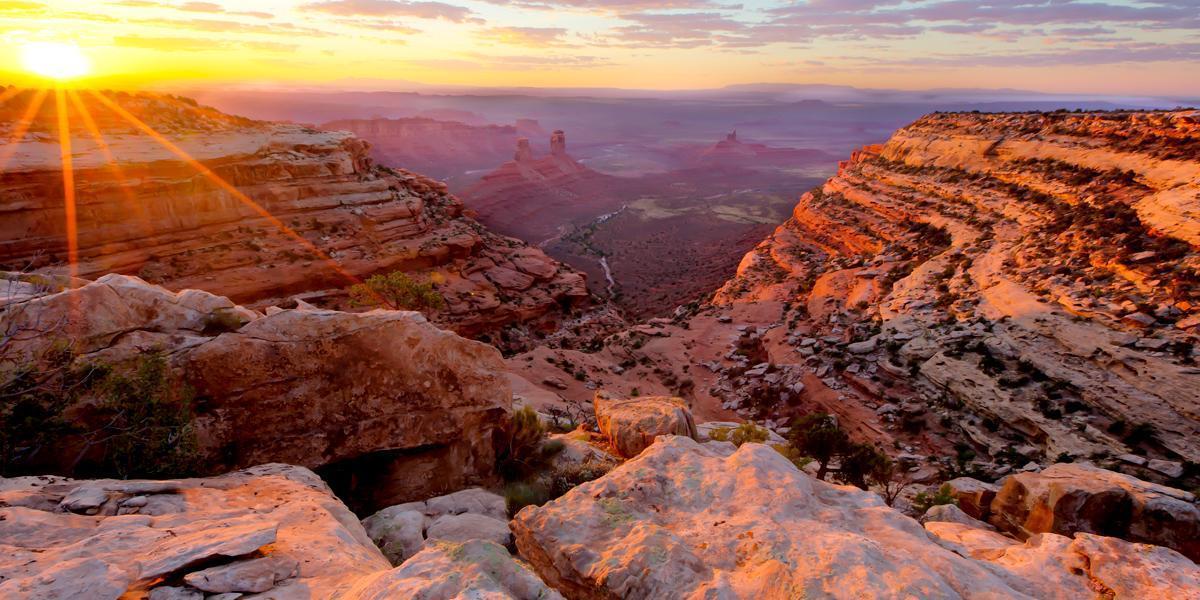 President Trump signed an executive order Wednesday ordering a review of the Antiquities Act and national monuments on more than 100,000 acres.

The review enables the Department of Interior to examine whether any of the monument designations have led to a “loss of jobs, reduced wages and reduced public access.”

“The Antiquities Act does not give the federal government unlimited power to lock up millions of acres of land and water,” President Donald Trump said during a brief ceremony today flanked by Vice President Mike Pence and Sec. of the Interior Ryan Zinke. He added that it was “time to end this abusive practice.”

The 1.35-million acre Bears Ears National Monument in Utah is one of the first targets for review. The monument was created by President Obama last year and has sparked major controversy between Republican lawmakers and conservationists. Utah Gov. Gary Herbert and Utah’s congressional delegation led by Congressmen Rob Bishop and Jason Chaffetz and Senators Orrin Hatch and Mike Lee have launched a campaign to abolish national monument. More than 270 million acres of American land and waters are potentially at risk—an area two and a half times the size of California.

GOP lawmakers have accused President Obama, who designated more monuments than any other president, of abusing the Antiquities Act to protect land from fossil fuel development.

“By potentially rolling back safeguards for lands and waters that are currently protected from destructive development for generations to come, Trump is carving up this beautiful country into as many corporate giveaways for the oil and gas industry as possible,” said Diana Best of Greenpeace USA. “People in this country who cannot afford the membership fee at Mar-a-Lago want safe water they can drink and public lands for their communities to enjoy.”

National monument designations have protected some of the most iconic places in the country. Dozens of the nation’s most treasured national parks were first protected as monuments, including Grand Teton, Grand Canyon, Bryce, Zion, Acadia and Olympic national parks, explained the Center for Biological Diversity.

Rhea Suh, president of the Natural Resources Defense Council, emphasized that the NRDC will fight the review, and said the president is not authorized to reverse monument designations.

“These public lands belong to all of us,” she said. “The U.S. holds them in trust for the benefit of this and future generations. These monuments have been deemed worthy of permanent conservation because of their unique resources and wildlife, ecological importance, and vulnerability to encroachment and destruction. President Trump and Secretary Zinke should not strip away their protection and subject them to industrial exploitation by polluters or other corporate interests.”

The Center for Biological Diversity noted that more than 50 national monuments are at risk, including vast marine areas in the Pacific and Caribbean. Congress gave the president the authority to designate national monuments on federally owned land under the Antiquities Act of 1906, which was signed into law by President Teddy Roosevelt, for the express purpose of protecting important objects of historic and scientific importance.

“This is a frightening step toward dismantling the protection of some of America’s most important and iconic places: our national parks and monuments,” said Kierán Suckling, executive director of the Center for Biological Diversity. “Trump’s tapping into the right-wing, anti-public-lands zealotry that will take us down a very dangerous path—a place where Americans no longer have control over public lands and corporations are left to mine, frack, clear-cut and bulldoze them into oblivion. It starts with Bears Ears and Grand Staircase and only gets worse from there.”

National monuments are cherished by Americans for their natural beauty and cultural significance.

“There is no need for a review to demonstrate what families across the country already know first-hand—national monuments provide tangible health, natural, and economic benefits,” said Michael Brune, Sierra Club executive director. “Protected outdoor spaces drive the outdoor recreation economy which supports 7.6 million jobs and generates $887 billion in consumer spending each year. National monuments and public lands are vital both for the history they preserve and the future they offer.

“Contrary to the Trump administration’s thinly veiled hopes,” he added, “this review will reveal what studies, surveys and polls have consistently found across the country—a deep, widespread appreciation for our parks, monuments and other public lands, and a popular belief that they should continue to exist.”

As thousands of people across the country and in Washington, DC are expected to join the People’s Climate March on Saturday, indigenous leaders and climate activists will, as 350.org Executive Director May Boeve points out, “now have to defend our parks and monuments from Big Oil as well.”

Tom Goldtooth, executive director of the Indigenous Environmental Network, put it this way. “This is another Trump action that is another act of aggression against the inherent sovereign rights of our Native Nations to protect the traditional cultural areas and sacred places of American Indian and Alaska Native people,” he said.

“There are many areas in this country, outside of our reserved lands that are of vital importance to our Indigenous peoples’ identity and rich cultural and spiritual history. The 1906 Antiquities Act cannot be stripped on its important historical mandates to designate national monuments to protect areas that have cultural, historical and environmental significance. The act is paramount to all the tribes in this country; for our cultural preservation now and into the future. The frontline Indigenous communities in our network see Trump’s actions as a way to open up fossil fuel and extractive mineral development within these national monuments designated under the 1906 Antiquities Act. Trump’s action must be stopped.”

Companies are also outraged at Trump’s latest executive order. “Less than 24 hours after joining with our industry to celebrate the economic power of outdoor recreation, in a hypocritical move, the Trump administration took unprecedented steps that could result in the removal of protections for treasured public lands,” Patagonia CEO Rose Marcario said.

“We take this as a sign that Trump and his team prefer to cater to fossil fuel interests and state land grabs for unsustainable development, rather than preserve a vital part of our nation’s heritage for future generations by protecting federal lands owned by every citizen.”