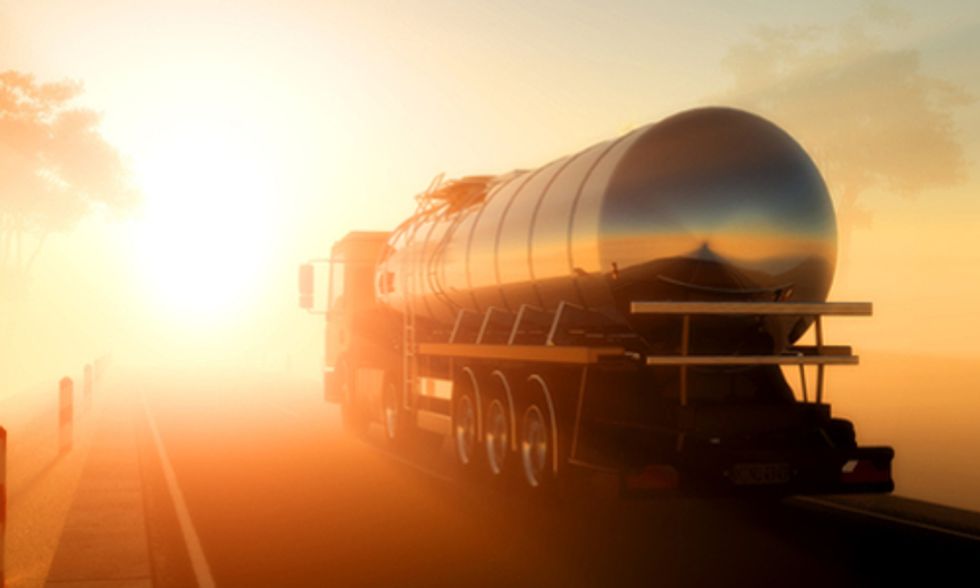 While there's been anecdotal evidence before, a new in-depth study undertaken jointly by the Houston Chronicle and Houston Public Media News 88.7 draws a strong circumstantial link between the fracking boom in Texas and the greatly increased number of highway deaths in the state. It's based on an analysis of statistics as well as numerous interviews with people involved with trucking and traffic safety.

The increased volume of heavy trucks on the road, along with unlicensed trucking firms, unfit drivers and unsafe vehicles, have led to an increase in traffic fatalities in Texas fracking regions.
Photo credit: Shutterstock

For decades, traffic deaths in Texas were declining just as they were all across the country, thanks to safety improvements like seat belts, airbags and child seats. Then in 2009—the same time the fracking boom begin—that trend reversed in the Lone Star state, in some areas dramatically. Texas now leads the nation in traffic deaths. And while traffic deaths overall increased 8 percent in the state from 2009-2013, deaths involving commercial vehicles exploded, growing 51 percent in that time. The study says that growth is on track to continue in 2014.

The report cautions that there's no way to link the accidents specifically to the oil and gas industry, but adds "Records show that fatal accidents increased more in the groups of counties that make up the Permian Basin and in those affected by the Barnett and Eagle Ford shale plays, where busy roads regularly fill with tractor-trailers, tanker trucks and commercial vans hauling water, workers and supplies to oil and natural gas well sites, as well in urban counties that serve as burgeoning hubs for the oil field industry."

Reporters found that traffic fatalities in the West Texas counties that make up the Permian Basin area increased 50 percent from 2009-2013. They increased in urban counties associated with the boom as well. In Midland County, they increased 47 percent.

There's another problem in addition to just the increased volume of heavy-vehicle traffic The trucks themselves are unsafe and unfit to be on the road, and they are often driven by unqualified operators. Defective brakes, bald tires and unsafe drivers were identified by state troopers as potential issues leading to fatal crashes involving commercial trucks. The Houston Chronicle assembled inspection statistics showing that a higher percentage of Texas trucks fail to meet federal and state road safety standards than the U.S. average every year. And unlicensed companies continue to operate after multiple safety citations.

The newspaper relates the story of a Houston woman, Vilma Marenco, who was killed instantly in April when her Chevy Cavalier was crushed by an oilfield truck loaded with metal pipe that ran a red light. It did not have a carrier license or insurance. The company it was linked to had failed its state safety audit less than five months earlier but continued to operate. The trooper who inspected the truck after Marenco's death found a dozen defects, three serious enough to take the truck off the road.

The report goes on to detail other horrific accidents that occurred because of lax safety regulations and fly-by-night companies employing unqualified drivers cashing in on the fracking boom: a dedicated professional trucker who had a head-on collision with another truck, loaded with flammable oil-based mud, that blew a bald tire and caused a explosion that burned both drivers beyond recognition, a motorcycle-riding man and his nine-year-old daughter sent flying into a ditch by a driver—a heavy drinker and meth user who had not been drug-tested before being hired as an oil-field driver—who failed to notice his turn signals weren't working and who never properly inspected his truck for defects.

And while the Houston Chronicle found that the state Department of Public Safety (DPS) had increased its audits and inspections since 2009, "DPS spokesman Tom Vinger refused multiple requests by the Houston Chronicle and by Houston Public Media to interview the head of the agency's Commercial Vehicle Enforcement service regarding the rise in crashes tied to the oil and gas boom." That suggests that perhaps they weren't able to keep with the growth of commercial traffic tied to fracking, a problem that's only likely to grow with Texas' weak regulatory climate and its exponential growth in drilling for oil and gas.