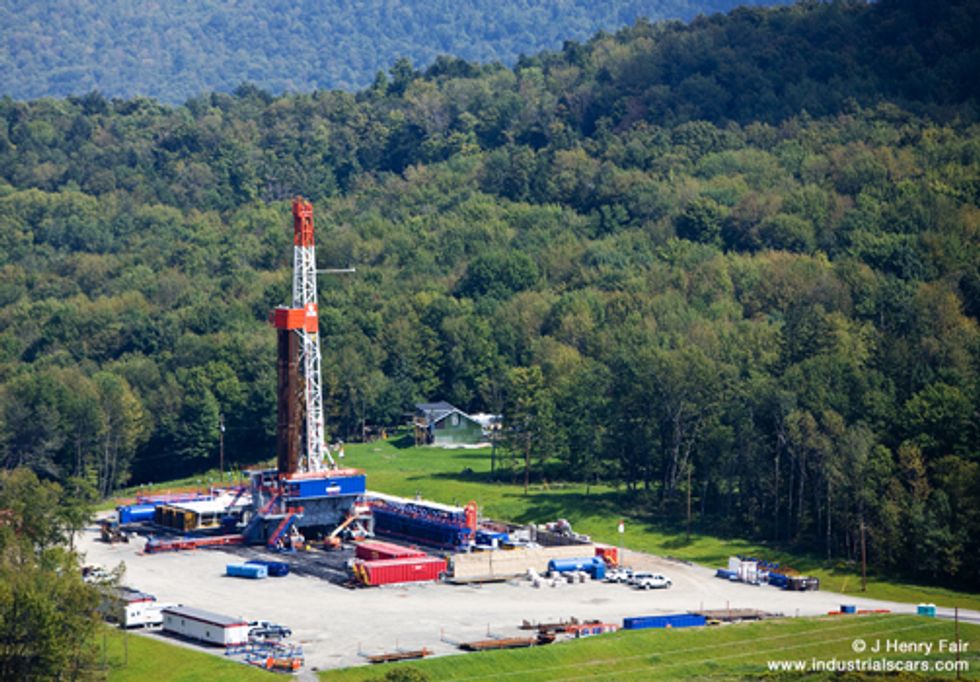 A growing boom in natural gas drilling near homes and schools prompted the city of Longmont, Colorado to vote last July to bar new oil and gas permits in residential neighborhoods.

The state quickly overturned the ordinance. Gov. John Hickenlooper said that letting it stand would “stir-up a hornet’s nest,” encouraging other Colorado towns to pass their own drilling rules. Longmont Mayor Dennis Coombs argued that communities have the right to restrict heavy industry in residential zones—including oil and gas drilling.

Landowners often are unaware of the scale of operations of a gas well when they sign the leases. Aside from the visual impact to the property, with remnant drill pads and possible water contamination, the longer term concern of damage to property values and violation of mortgage rules must be taken in to account. All images © J Henry Fair 2012 / www.industrialscars.com Special thanks to flight partner, LightHawk / www.lighthawk.org

The natural gas “gold rush” underway in 31 states is indeed “stirring up a hornet’s nest,” sparking push back from communities that see themselves as the last line of defense protecting citizens against state and federal failures to regulate fracking. Hydraulic fracturing, or fracking, is a technology that blasts millions of gallons of water, chemicals and sand underground to release oil and gas from shale bedrock.

“The U.S. faces a crisis in the enforcement of rules governing the oil and gas industry,” states a new report by Earthworks’ Oil & Gas Accountability Project. Their study, which analyzed government data from six heavily-fracked states, discovered that each of them failed to enforce existing drilling regulations. Between 53 and 91 percent of active wells in those states go uninspected—175,000 to 300,000 wells in all, with not enough inspectors nor the funding to pay for them or their equipment. As a result, many violations go unrecorded, with few penalties and many repeat offenders.

With just 17 inspectors for 60,000 wells in West Virginia, municipalities and environmental groups are calling for a moratorium on drilling until various safeguards and monitoring criteria are met. North Carolina’s controversial moratorium on natural gas drilling runs until 2014, when the legislature will vote on as-yet-unwritten regulations. But Raleigh, NC, Morgantown, WV, and other communities aren’t waiting for state action. They’ve preemptively passed local drilling bans or strict zoning rules.

Next door, in Pennsylvania, the legislature passed a 2012 law forbidding towns from regulating fracking, which was then overturned by the courts. Five Delaware Valley towns quickly asserted their “home rule” rights and prohibited fracking.

In Texas, the towns of Flower Mound, Grapevine and Southlake chose to regulate fracking within their city limits after the industry had heavily impacted their towns. Those ordinances include buffer zones that distance wells from homes, schools, churches and hospitals, as well as a Southlake ban on summertime fracking due to the industry’s competition for drinking water.

Meanwhile, back in Colorado, more than 80 county commissioners, mayors, and city council members statewide have asked Gov. Hickenlooper to withdraw his lawsuit against Longmont’s fracking ban, saying that, “Local governments have both the right and responsibility to take action to protect the public heath and well being of our citizens as well as the environment.”

Across the nation, this local opposition is occurring within a vacuum. The federal government does not regulate hydraulic fracturing, and the industry—unlike any in America—is exempted from seven major environmental regulations. On the 40th anniversary of the Clean Water Act, fracking gets a pass, along with exemptions from the Clean Drinking Water Act, Clean Air Act, the Superfund law and hazardous waste disposal regulations.

Only four states have significant regulations, which seem to go largely unenforced.

Not one state, nor the federal government, currently requires drillers to disclose “proprietary” drilling formulas, which contain chemicals known to cause cancer or disrupt hormones that regulate basic body functions, including benzene, toluene, diesel and formaldehyde, to name a few. Oil and gas companies pumped 780 million gallons of fracturing products underground from 2005-2009 containing about 750 different chemicals.

Of the 353 chemicals identified by researchers in a recent study, about half could harm the nervous system, the cardiovascular system and blood, 40 percent could disrupt immune function, about a third could affect endocrine organs and a quarter could cause cancer.

In August, Wilkes-Barre physician Dr. Alfonso Rodriguez filed a federal lawsuit, arguing that the PA frack “gag rule” violates his First and Fourteenth Amendment rights, preventing communication with “patients, colleagues, medical researchers and the public regarding the identity and amount of chemicals, and the health hazards they present to the community.”

The root of the regulatory breakdown lies with elected officials who take hefty campaign contributions from frackers—then pass industry-friendly rules. The oil and gas industry has already handed at least $30 million in 2012 campaign contributions to members of Congress and fossil fuel political action committees. A current flag-waving “Vote 4 Energy” TV ad boasts job creation, though most frack jobs are short-term and go to out-of-state, transient workers—often attracting drugs, prostitution and crime to communities.

But it also goes one step deeper. The underpinning that allows fracking to go nearly unregulated across America is a century-old, Industrial Revolution-era legal framework that favors limitless economic growth, even if it harms human health or the environment or tramples the rights of citizens or communities—and it’s up to those harmed to prove damages, notes legal scholar Joseph Guth.

The European REACH system stands in stark contrast to the U.S. model, placing the burden of proof on companies—not governments—to show that the chemicals they produce or use are safe.

Polls show that more than 80 percent of Americans want clean energy, but federal and state officials have done little to shift towards renewables. In the meantime, more and more communities are moving to protect their citizens against the “fracking gold rush.”