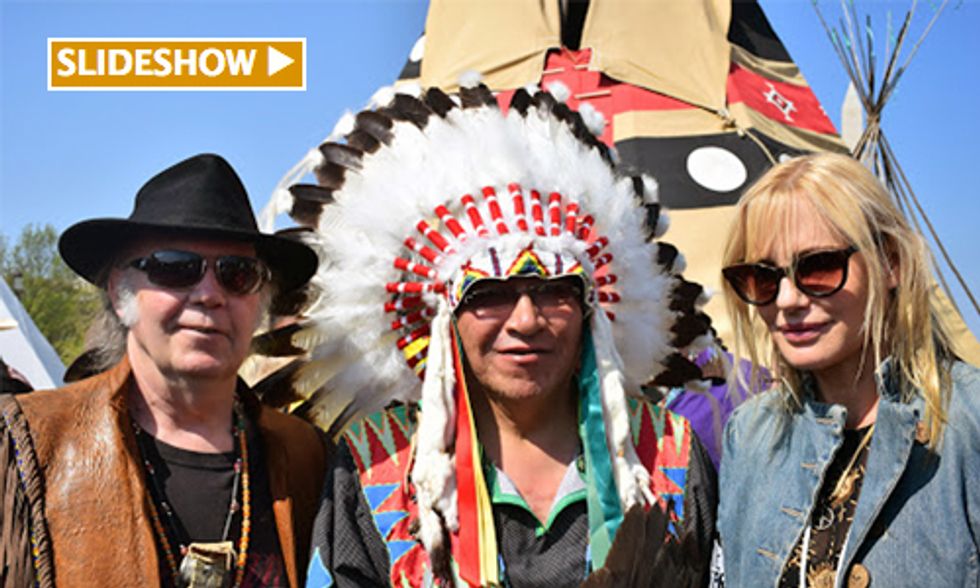 Thousands of people joined the farmers, ranchers and tribal leaders of the Cowboy and Indian Alliance for a ceremonial procession along the National Mall to protest the Keystone XL pipeline yesterday. The procession was the largest event yet of the five-day “Reject and Protect” encampment.

“Today, boots and moccasins showed President Obama an unlikely alliance has his back to reject Keystone XL to protect our land and water,” said Jane Kleeb, executive director of Bold Nebraska, one of the key organizers of Reject and Protect.

Legendary musician Neil Young and actress Daryl Hannah were amongst the crowd of thousands who rallied on the National Mall and then marched past the Capitol building. “We need to end the age of fossil fuels and move on to something better,” Young told the crowd.

The day’s procession included the presentation of a hand-painted tipi to the Smithsonian National Museum of the American Indian as a gift to President Obama. The tipi represented the Cowboy and Indian Alliance’s hopes for protected land and clean water. The formal name of the tipi is “Awe Kooda Bilaxpak Kuuxshish” and “Oyate Wookiye,” two names given to President Obama by the Lakota and the Crow Nations upon his visit to those Nations in 2008. The title translates from the Lakota and Crow languages, respectively, as “Man Who Helps the People” and “One Who Helps People throughout the Land.”

“Keystone XL is a death warrant for our people,” said Oglala Sioux Tribal President Bryan Brewer, who helped lead the presentation of the tipi to the Smithsonian. “President Obama must reject this pipeline and protect our sacred land and water. The United States needs to respect our treaty rights and say no to Keystone XL.”

Reject and Protect has helped shine a spotlight on the strengthening opposition to Keystone XL amongst ranchers, farmers and Native American tribes along the pipeline route. Buoyed by the State Department’s recent delay of the project, the Cowboy and Indian Alliance has pledged to intensify their efforts to convince President Obama to “reject” the pipeline and “protect” their families, land, water, treaty rights and climate.

“Every time Keystone XL gets delayed it just gives us more time to speak up and tell the truth about this dangerous pipeline,” Meghan Hammond, a sixth-generation Nebraska rancher told the crowd of thousands. Hammond worked with her family to build a crowd-funded, clean-energy powered barn on her property, directly on the proposed route of Keystone XL.

The five-day Reject and Protect encampment began with a march and opening ceremony on Earth Day, April 22. On Wednesday, members of the Cowboy and Indian Alliance met with the White House to voice their concerns about Keystone XL and tar sands expansion. On Thursday, the Alliance hosted a protest at the Lincoln Memorial where Rosebud Sioux member Wizipan Little Elk and Nebraska farmer Art Tanderup risked arrest by walking into the reflecting pool with a sign that read, “Standing in the water could get me arrested, TransCanada pollutes drinking water and nothing happens.” On Friday, the Alliance hosted an interfaith prayer ceremony outside Secretary of State John Kerry’s house, before marching through Georgetown and holding a round dance in the middle of the M St. and Wisconsin Ave. intersection.

“The proposed pipeline is going to be coming through our backyard,” said Robert Allpress, a rancher from North-Central Nebraska. “We live in an area that is very slide-prone and TransCanada has never checked that out. They’re in the wrong place at the wrong time and we don’t need them because they’re not beneficial for the United States.”

“We have come to a point where we have no choice left but to lift up our inherent treaty rights—our birthrights,” said Crystal Lameman, a member of the Beaver Lake Cree Nation, Treaty No. 6. “The Crown and this Government do not get to pick the pieces of their law it likes and which ones it does not. They made their laws thus they have to abide by them. As First Nations people, we abide by natural law, and there is nothing natural about a people dying from cancer and suffering from respiratory illnesses caused by tar sands production.”

On Friday, Senator Barbara Boxer offered her support for the encampment, “I commend all of the ranchers, farmers and indigenous leaders from throughout our nation's heartland who have come to Washington, D.C. this week. Although I cannot be with you in person, I want you to know that your presence sends a strong signal to Congress and the administration about the need to protect our communities and families from the impacts of dirty tar sands oil.”

Reject and Protect will end with an interfaith ceremony at the encampment on Sunday morning, but according to lead organizers, the Cowboy and Indian Alliance will continue to build its ground campaign against the Keystone XL pipeline until President Obama rejects it once and for all.

“This is just the beginning. The Cowboy and Indian Alliance will ride again,” said Bold Nebraska’s Jane Kleeb.