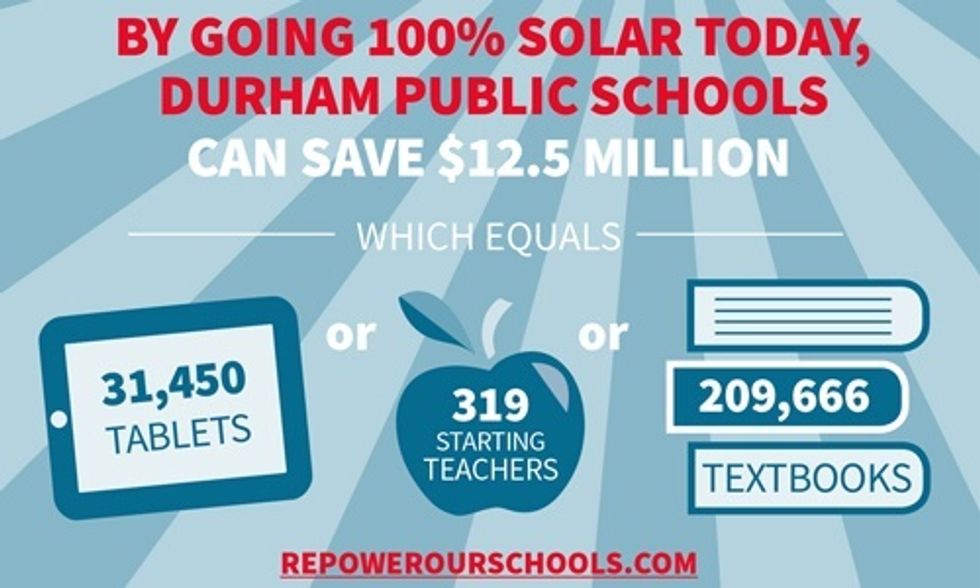 Schools all across the country have been switching to solar to save money and reduce their environmental impact, and North Carolina may be the next state to benefit.

The North Carolina Clean Energy Technology Center, based at NC State University, found that Charlotte-Mecklenburg Schools and Durham Public Schools can meet 100 percent of their electricity needs and save millions over the next 25 years by installing solar panels to power their schools immediately.

Reducing energy costs is a smart way to direct more money into the classroom, where it’s needed most. Utility bills are the second largest expense for school districts after personnel costs, according to the U.S. EPA.

With more solar-friendly policies in the state, including third party energy sales and improved net metering, the school districts’ savings would  jump 14 times compared to the current benefits of going solar. North Carolina is one of only a handful of states with a legal gray area that effectively blocks purchasing electricity from anyone but the utility.

Solar policy improvements could save $54.6 million for Charlotte-Mecklenburg Schools and $16.3 million for Durham Public Schools over 25 years, an 11 percent savings over what they pay for electricity now, with minimal upfront costs. The savings over 25 years would be equivalent to 1,357 annual starting teacher salaries for Charlotte-Mecklenburg Schools and 414 for Durham Public Schools, which is a substantially smaller school district.

Here’s an infographic that explains the benefits of third party energy sales and net metering:

Not only does solar save money, it can also be a teaching tool for science, technology, engineering, and math.

“Solar installations at North Carolina schools would bring the jobs of tomorrow into the classroom today,” Dr. Wafa Khalil, a retired science and energy teacher of 23 years based in Durham, said. “Teachers could incorporate solar into the curriculum and let students witness its advantages firsthand.”

Parents, teachers and students who want to see their school districts go solar for the health, environmental and economic benefits can take action by calling on their school boards to transition to 100 percent renewable electricity.