The Politics of Fracking: Polarization in New York State 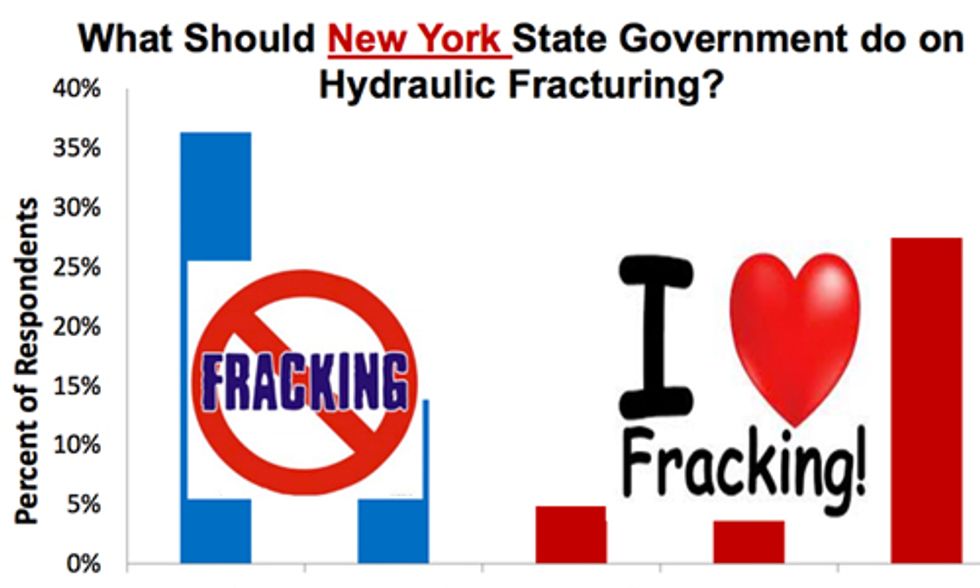 In September, The Earth Institute hosted Tanya Heikkila and Chris Weible of the University of Colorado Denver for a seminar on The Political Landscape of Shale Gas Development and Hydraulic Fracturing in New York. The seminar was attended by students, faculty and staff from across Columbia, and members of the local community. Professors Heikkila and Weible presented the results of their study, funded by the Alfred P. Sloan Foundation, looking at fracking perceptions in three study sites: New York, Texas and Colorado. The following is an overview of the results.

Hydraulic fracturing, better known as “fracking,” is the process of injecting high-pressure water, sand and other chemicals into shale rock formations in order to extract oil and gas. Fracking has been around for some time, but only in the past several years has the issue come into the public eye. It’s a highly contentious political issue because of the high volume of water it uses, the types of chemicals used and the unknown health and environmental impacts. In fact in New York, there was a pause on gas drilling permits that utilize fracking. This has become known as the “de facto moratorium,” and has put the state in somewhat of an area of uncertainty. There have been a number of debates at the local level around fracking, the moratorium, and what should be done next.

This Sloan Foundation study focused on providing an impartial lens on the politics of the issue through a series of surveys and interviews with “policy actors.” Policy actors were defined as anyone who regularly seeks to influence the politics on hydraulic fracturing, whether from government, NGOs, industry or academia. For their talk at Columbia, Heikkila and Weible focused on the results from New York State, and presented an overview of the kinds of responses they received from policy actors when asked about fracking and the impact of the moratorium.

Overall, respondents offered a wide range of positions on what they thought New York State government should do—everything from banning the practice to permitting fracking statewide. To simplify the presentation of the results, policy actors were split into two groups based on their position—essentially pro-fracking and anti-fracking groups.

While public opinion is fairly skewed against the fracking process, policy actors in New York State can best be described as polarized. Predictably, the pro-fracking group generally disagrees with environmental groups while the anti-fracking group generally disagrees with the oil industry. Policy actors in New York had stark differences in answers on a wide variety of questions. For example:

In addition, the comments from the respondents in the study revealed that environmental groups have been more successful than other groups at influencing the public. In addition, people are concerned about the lack of transparency by the Department of Environmental Conservation and the governor’s office. Comments also illustrated that we are seeing an increasing polarization of opinions on these issues:

Overall, this study indicates that fracking is controversial because the debate revolves around values. Heikkila and Weible argue that in cases such as these, throwing more technical science at the issue does not necessarily improve the situation or reduce polarization. In the New York State case, the future depends a lot on the status of the moratorium, because, as they note, negotiation won’t happen as long as one side benefits from the status quo. Heikkila and Weible gave some insight into strategies for moving forward, although they admitted that there are no sure-fire solutions for such a contentious topic.

They pointed out the importance of openness and transparency as a way to increase overall awareness about the issues at hand. They warned that once people become invested in a position, it is difficult to change their minds. And as one of their interviewees suggested, one way to prevent this phenomenon from occurring is to “get the public involved in debates earlier in the process, and by incorporating easily understandable scientific information in those early stages."

The Earth Institute is made up of more than 30 research centers and over 850 scientists, postdoctoral fellows, staff, and students. To learn more about the Earth Institute’s education programs such as the MPA in Environmental Science and Policy or the MS in Sustainability Management, click here.

How Climate Change Exacerbates the Spread of Disease