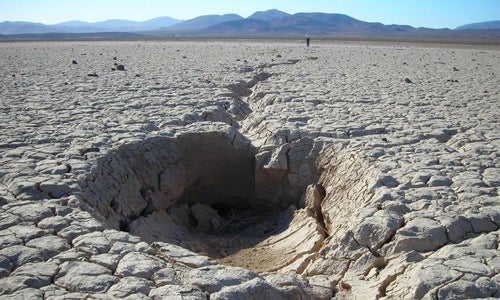 Vast stretches of California’s Central Valley are sinking faster than in the past as the state continues to pump out massive amounts of groundwater during its epic drought, NASA said in a report released Wednesday. The Golden State has been forced to rely more and more on groundwater as it grapples with a four-year drought, record low snowpack and reservoirs that are running dangerously low.

“The research shows that in some places the ground is sinking nearly two inches each month…” http://t.co/5pUI2vg7FQ

The report found that some places are losing nearly two inches per month.

“Because of increased pumping, groundwater levels are reaching record lows—up to 100 feet lower than previous records,” said Department of Water Resources Director Mark Cowin. “As extensive groundwater pumping continues, the land is sinking more rapidly and this puts nearby infrastructure at greater risk of costly damage.”

Sinking land, or subsidence, has been a problem in California’s Central Valley for decades as the state has had to rely on increasing amounts of groundwater. But now NASA data, which the agency obtained by comparing satellite images of the Earth’s surface over time, reveals the problem is the worst its ever been.

The drought in California is so bad in some parts that the ground is sinking 1ft each year: http://t.co/Q9LTJ35FWT pic.twitter.com/LQnD2CsrES

Land near Corcoran in the Tulare basin sank 13 inches in just eight months—about 1.6 inches per month. One area in the Sacramento Valley was sinking approximately half-an-inch per month, faster than previous measurements. NASA also found areas near the California Aqueduct sank up to 12.5 inches, with eight inches of that occurring in just four months of 2014.

And Californians aren’t the only ones with that sinking feeling. Last week, a study showed parts of southern Arizona are sinking too. The U.S. Geological Survey has identified more than 17,000 square miles (an area the size of New Hampshire and Vermont combined) of land subsidence in 45 states.

Chloe & Theo: A Movie That Will Change the Way You Look at the World