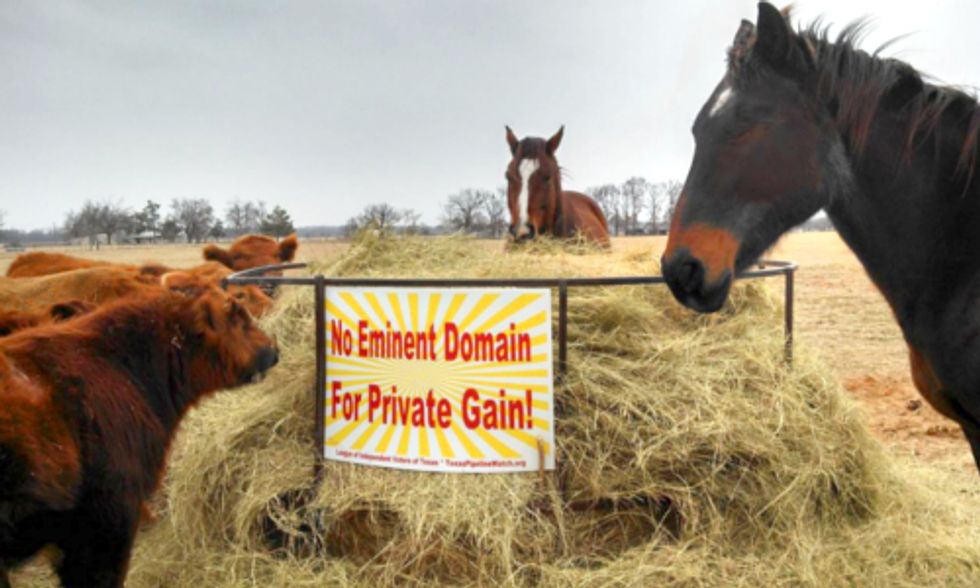 The Texas Supreme Court ruled in favor of landowner Julia Trigg Crawford, ordering TransCanada to submit information by Feb. 6 as the justices weigh arguments to hear the case regarding eminent domain abuse.

Texas’s highest court delivered a clear victory for pipeline opponents and landowners fighting TransCanada’s overreach on property rights. At the heart of Crawford’s case is the ability of TransCanada, a foreign corporation, to use eminent domain under the state’s “common carrier” clause since their pipeline transports 90 percent Canadian tar sands and 10 percent North Dakota oil. There is no on ramp for Texas oil therefore violating the definition of a common carrier under Texas law.

Crawford said she looks forward to her family’s day in court, “As a landowner, property rights are key to my livelihood and family legacy. A foreign corporation pumping foreign oil simply does not qualify as a common carrier under Texas law. TransCanada does not get to write their own rules. I look forward to the Supreme Court hearing our case and our plea to protect the fundamental rights of property owners.”

The ruling on Wednesday from the Texas Supreme Court means that Crawford will be able to take the next step in the appeals process against TransCanada. The southern segment of the Keystone XL pipeline, also known as Gulf Coast Segment, stretches from Cushing, OK, to Beaumont, TX, and carries tar sands or dilbit which is a combination of tar sands and chemicals that react very differently when spills occur than traditional Texas oil.

“We’re thrilled, because the Supreme Court has finally ruled in favor of us—the little guys—and against a foreign oil giant,” Julia Trigg Crawford continued. “Basically, TransCanada said that it wanted a waiver from responding to our petition, and the Supreme Court said, ‘No, you must respond’.”

Crawford says her case has broad implications, because if she wins, TransCanada and other foreign oil companies will no longer be able to use eminent domain to seize land for their private profit without direct proof their pipeline is carrying Texan oil.