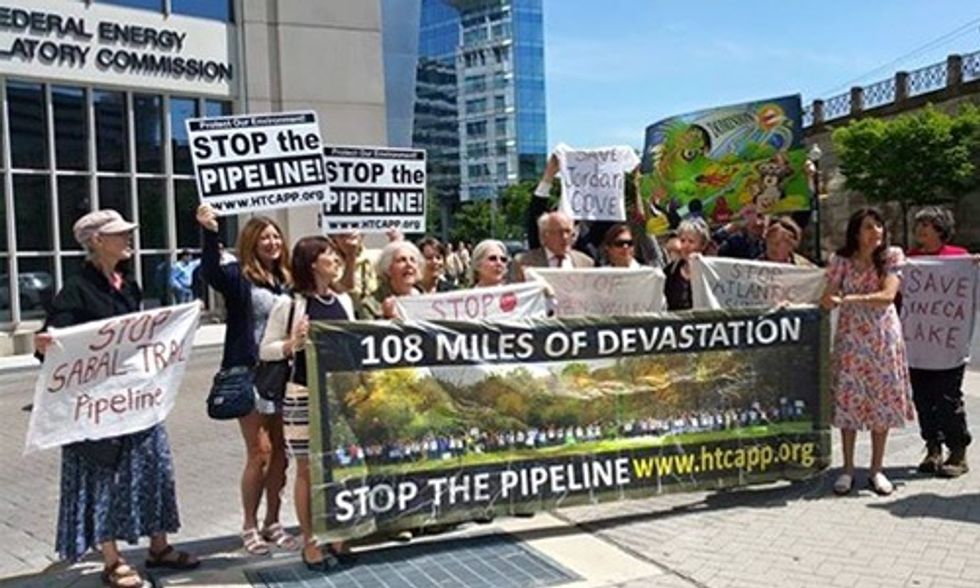 “If someone is upset with fracking, they should probably talk to the states.” —Norman Bay, Chairman of the Federal Energy Regulatory Commission (FERC), May 14, 2015

Why protest? Why demonstrate? Why nonviolent direct action? Part of the reason is to put pressure on those in power to smoke them out, to get them to say things publicly they might otherwise not say, to expose the truth about how and why things are working the way they are.

Concerned citizens protest outside of the Federal Energy Regulatory Commission building in Washington, DC on May 14. Photo credit: Beyond Extreme Energy

FERC has more to do with fracking than any other federal agency, and much more than any one state. They approve interstate pipelines to carry fracked gas, compressor stations to push the gas along, storage terminals to store it and, for the last two years, export terminals to ship it around the world. Without this infrastructure, fracking wouldn’t be happening.

Norman Bay is not stupid. He knows this. And yet, because FERC has been a target of nonviolent direct action for more than 10 months, organized by Beyond Extreme Energy (BXE), and because BXE is planning a return to FERC from May 21-29, he has been thrown off, saying and doing things that have not been helpful to resolve “the situation” they are now in.

Bay made this ridiculous statement on the day that FERC had its monthly public meeting. But it was not held on the regular third Thursday of the month that it has been held for years and years. Bay and his fellow FERC Commissioners canceled it because of a disingenuous concern, they said, for “the safety of FERC staff and the public” in the face of BXE’s publicly-announced plans to take nonviolent action at FERC on that day.

To add insult to injury, on May 14, the day that this meeting was rescheduled, dozens of members of the public were kept from the room where the “public” meeting was held, six were detained by Federal Protective Services police and three were arrested.

I was contacted by a reporter after this action, wanting to know why BXE was engaged in this campaign, where it came from. I proceeded to explain to him that it had emerged out of years of experience by lots of grassroots people trying to get a fair hearing from FERC concerning pipelines, compressors and storage and export terminals being proposed for their communities. These are people who played by FERC’s rules, going to the one public meeting attended by FERC staff to learn about the proposed project, becoming an official “intervenor,” presenting well-researched arguments against proposed infrastructure projects, filing large numbers of comments with FERC, appealing a FERC decision within the FERC administrative process and the results were always the same: FERC approval of what the gas industry wanted.

Many of us who had never heard of FERC, now understand that it is a rubber stamp for the fossil fuel industry.

A month ago a story, Employees negotiate for industry jobs under agency’s eye, published by E&E’s Greenwire and written by Hannah Northey and Kevin Bogardus, reported on the corrupt, internal FERC culture which explains FERC’s rubber-stamping ways:

“Employees at the Federal Energy Regulatory Commission have deep ties to the industry they regulate, according to agency documents detailing their job negotiations and stock holdings.

“Ethics records throughout 2014 show agency staff seeking employment with grid operators, law firms and utilities that the agency has jurisdiction over and often meets with as it sets new orders and rules. In addition, FERC employees have held stock in or remain part of pension plans from companies that can be affected by the agency's work. Greenwire obtained the 88 ethics documents under the Freedom of Information Act.

“The disclosures reflect how FERC, which oversees the interstate transmission of electricity and permitting of gas infrastructure, is regulating an industry that many of its staffers are well-suited for and often courted to work in.”

This corruption, this washing of hands of any responsibility for the massive harms of fracking and its threat to the climate, is why hundreds of people are planning to participate over the course of BXE’s May 21-29 Stop the #FERCus actions. FERC is rattled. It’s time to ratchet up the pressure.