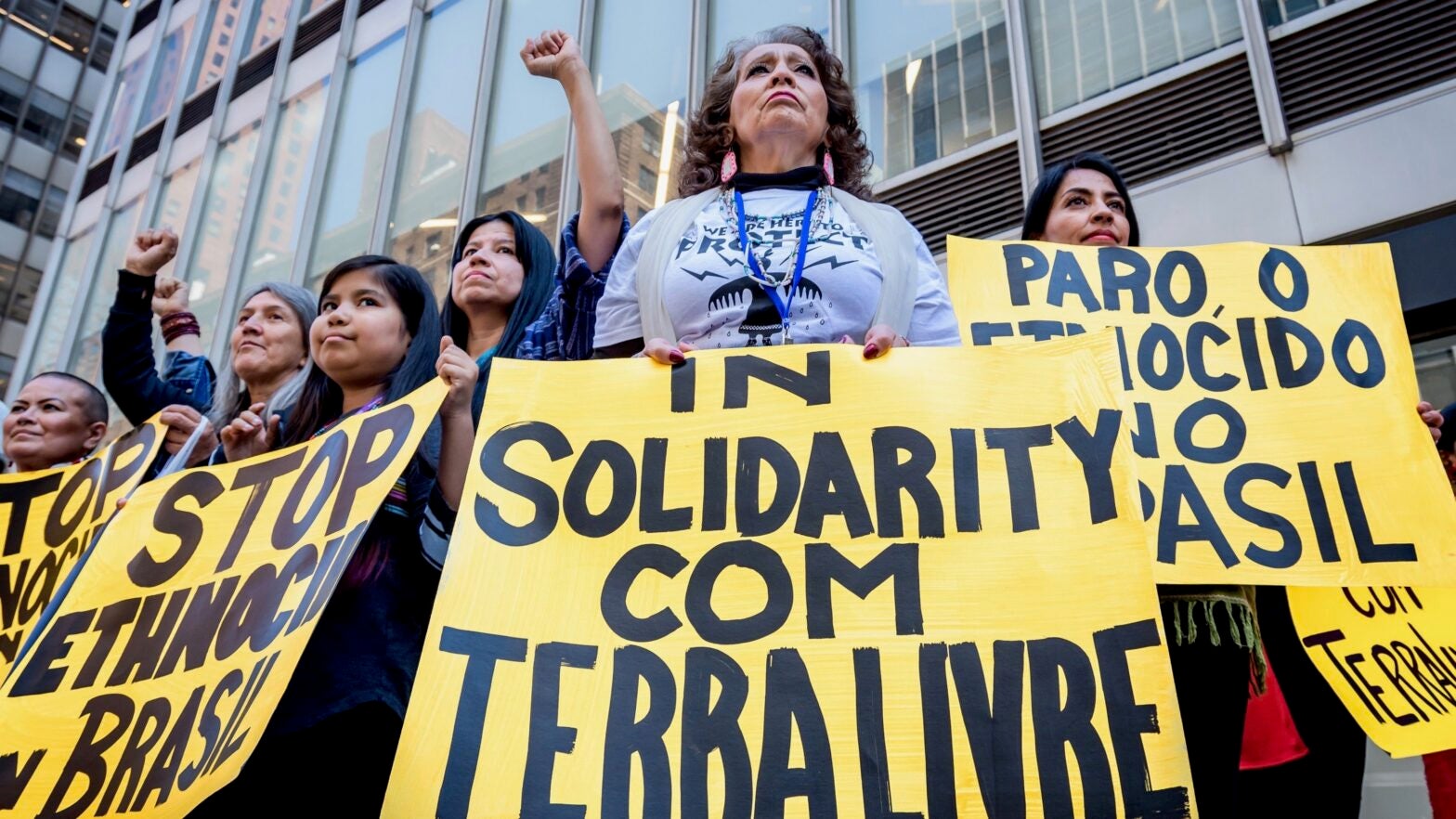 For the past seven years, the Anishinaabe people have been facing the largest tar sands pipeline project in North America. We still are. In these dying moments of the fossil fuel industry, Water Protectors stand, prepared for yet another battle for the water, wild rice and future of all. We face Enbridge, the largest pipeline company in North America, and the third largest corporation in Canada. We face it unafraid and eyes wide open, for indeed we see the future.

The Anishinaabe speak of this time as the time of the Seventh Fire — we must choose between two paths, one well worn and scorched, the other green.

Under a hail of water cannons, the name “Water Protector” was immortalized in the battle to stop the Dakota Access Pipeline in 2016. The rights of humans, and the rights of Nature, were trampled by the corporate machine of the pipeline company known as Energy Transfer Partners and million worth of militarization. That’s what was paid out in the name of “policing and cleanup” by the state of North Dakota to brutalize Water Protectors who came from a dozen states and cities to protest against Energy Transfer Partners and the Dakota Access Pipeline.

Standing Rock was surely a Selma Moment in the environmental movement. This was a battle over the water and rights of Indigenous peoples and nations, but this was also clearly a battle over climate change and the future. We left Standing Rock with a deeper understanding of who we were and of this moment in time.

For the past six years, the Anishinaabe and our fellow Water Protectors have been fending off mega projects — coal generators, mining projects and Enbridge pipelines, which deliver oil from Canada to the United States. After a three-year battle against Enbridge’s proposed Sandpiper, a 640,000-barrel-a-day fracked oil pipeline from North Dakota to Wisconsin, Enbridge canceled the project August 2, 2016, and purchased 28 percent of the Dakota Access Pipeline. The largest pipeline company in the western hemisphere folded its hand.

Yet the company came back with a plan to build Line 3, the 915,000-barrel-a-day tar sands pipeline. The bitter battle between Water Protectors and Tar Sands Wiindigos (“cannibals” in Ojibwe, a word that now serves as a metaphor for colonizing and extractive oil companies like Enbridge) continues. This last month, the Bad River Band of Anishinaabe filed suit against Enbridge, Inc., demanding that the company remove Enbridge’s 66-year-old Line 5, which traverses from the south shore of Gitchi Gummi toward the Straits of Mackinac. There, the opposition to a new pipe/tunnel scheme in a precarious crossing of the Great Lakes continues.

As an economist by training, I refer to capitalist economics as “Wiindigo Economics” — the economics of a cannibal. Enbridge’s proposed Line 3 represents l70 million metric tons of carbon annually added to the environment, according to calculations made by analysts at Honor the Earth, the 26-year-old Native-led national environmental organization where I serve as executive director.

Now, slaying a Wiindigo like Enbridge is complicated. In this case, we must just keep saying no — legally, in the streets and in the investment world. We must starve the Wiindigo. Tar sands oil is extremely expensive. Put it this way: Every source of oil in the world is cheaper – much cheaper. According to Rystad Energy oil analysts, the average tar sands project won’t even break even on the cost of getting the fuel out of the ground unless international oil prices rise to per barrel and stay there. In contrast, the average U.S. fracked oil well will break even with oil prices at per barrel. And that tar sands oil is landlocked. It will remain so.

Just before he died, David Koch sold his tar sands assets. He’s rumored to have lost billions. The Koch brothers at one point held the largest tar sands reserves, but this August, they sold their remaining assets to a unit of Paramount Resources Ltd. “for an undisclosed sum following halted attempts to develop projects,” according to The Globe and Mail. That’s what happens with divestment and a lack of pipelines.

Native peoples have been shackled with fossil fuel projects, and many are withering away. For the past 70 years, four of the 10 largest coal strip mines have been in Crow, Hopi and Navajo territory. By the end of the summer, three of those coal strip mines will be closed down, and with them, many of the units of the aging coal generators — Four Corners, Navajo Generating Station and Colstrip Units 1 and 2.

At the end of the fossil fuel era, big companies try to dump their liabilities on Native nations. BHP Billiton dumped a 50-year-old coal strip mine on the Navajo Nation in 2016, and Canada’s Trudeau administration is trying desperately to peddle the liabilities of the Trans Mountain Pipeline Project (also known as Trudeau West) to a collaboration of First Nations in Canada. But times are changing.

This past month, two units of the colossal Colstrip Power plants, fed with Crow coal extracted by the Westmoreland Coal Company are scheduled to close by the end of the year. In turn, lawsuits filed by grassroots citizens organizations such as the San Juan Citizens Alliance and its partners have forced the closure of more units at the notorious Four Corners power plant. Change is inevitable. The question is, who controls the change.

In 2017, the Kayenta Solar Facility came online with 27 megawatts of power for Navajo people. This wholly owned Navajo project is the first-of-its-kind utility-scale solar project within the Navajo Nation.

Kayenta Solar was built in six months by Navajo people, who count among them more electrical engineers than any other tribe. On the White Earth reservation, 8th Fire Solar was launched this summer, producing Solar Rating and Certification Company­ — certified solar thermal panels to distribute throughout North America. Honor the Earth is also putting in 200 kw of solar to support the communities of White Earth.

Now is the time to choose the green path over the scorched path. The stakes are raised daily: Fires burn to the north, west, south and east, and we all feel the grief of our Mother Earth, for we are her children. It is time to be a Water Protector. It is time to be a Wiindigo Slayer — that is, it is time to stop the monsters and cannibals that plague our villages. That’s what our Anishinaabe ancestors did: They slayed those Wiindigos, and that’s why we are still here, 8,000 years later. It’s time for this generation to summon up our courage, vision and prayers.

We are familiar with Wiindigos. We have been Wiindigo Slayers in the past, and we will be again. They have the money, but we have the people. We also have a vision for life in the future.

This story originally appeared in Truthout. It is republished here as part of EcoWatch’s partnership with Covering Climate Now, a global collaboration of more than 250 news outlets to strengthen coverage of the climate story.