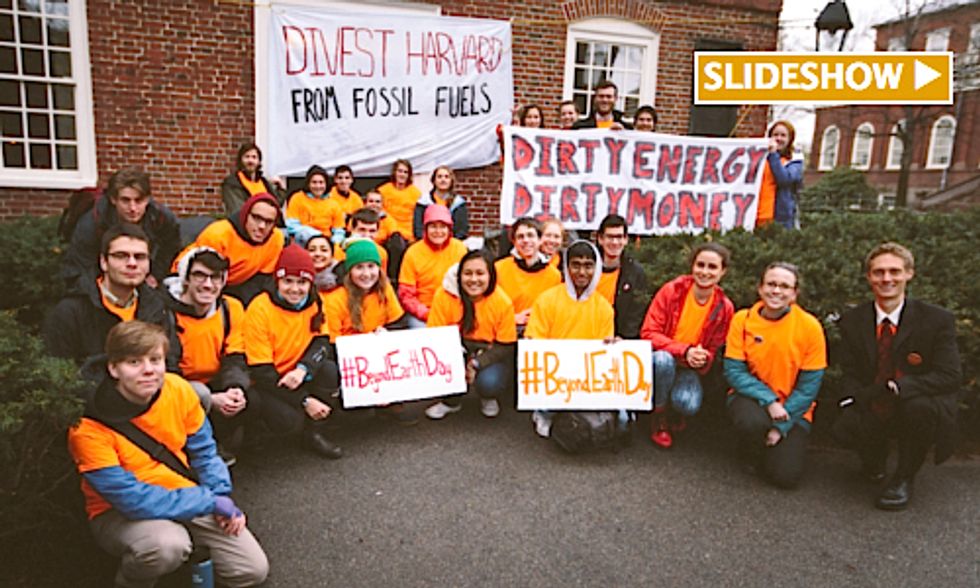 Student activists with the Divest Harvard campaign blockaded one of the main entrances to Harvard University President Drew Faust’s office in Harvard Yard today, kicking off a day of non-violent action. Students are calling for an open debate about fossil fuel divestment with the Harvard Corporation after having been denied a public meeting with the administration since fall 2013, according to the groups press release.

Supported by 350.org and Better Future Project, the campaign is part of a global movement including more than 400 campuses calling for endowments to divest from publicly traded coal, oil and gas companies that own the majority of the world’s carbon reserves. The fossil fuel divestment movements aims to stigmatize and decrease the influence of fossil fuel companies responsible for the worsening climate crisis.

Divest Harvard is calling on the university to:

The Harvard administration has repeatedly refused to participate in open and transparent dialogue about fossil fuel divestment, instead holding meetings with trustees behind closed doors and making public statements that dismiss concerns about the dangerous political influence of fossil fuel corporations.

“The university’s failure to respond to demands for an open discussion of its investments in fossil fuels shows a lack of respect for student opinion,” said Brett Roche, undergraduate and blockade participant. “If a Harvard education is truly meant to liberate students to challenge and to lead, then the administration should be ready to engage with students organizing for institutional change.”

In addition to the blockade, a day-long rally is taking place that features music and speeches by alumni, faculty, social justice groups and prominent climate activists, including Tim DeChristopher. The students are encouraging passers-by to make T-shirts, banners and other crafts as well as write letters to President Faust and members of the Harvard Corporation about why they support fossil fuel divestment.

“We want to get President Faust’s attention,” said Sidni Frederick, undergraduate and Divest Harvard member. “It’s important for the university’s leadership to know that the student body can’t wait any longer for them to begin a real dialogue about why they aren’t taking bolder steps in solving the climate crisis, a problem that threatens all of our futures.”

For more than two years much of the Harvard community has been calling for the university to divest. In 2012 72 percent of students voted for divestment and earlier this month 93 faculty members sent a strongly worded open letter to President Faust and fellows of the school admonishing the university for refusing to consider divestment.