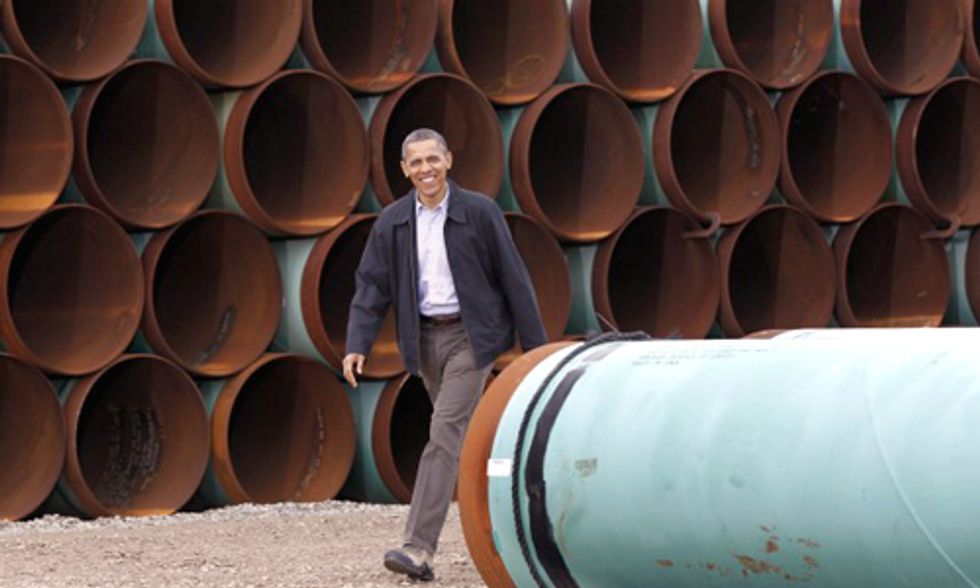 The U.S. State Department on Friday afternoon said that it is giving eight federal agencies an extension for reviewing the Keystone XL pipeline project proposal.

The department said the decision partly hinges on Nebraska Supreme Court litigation that could affect the pipeline's route. For that reason, there's no timeline on the delay.

.@StateDept will provide more time for the submission of agency views on the proposed #KeystoneXL Pipeline Project. http://t.co/SSDvcNI1Kr

"In addition, during this time we will review and appropriately consider the unprecedented number of new public comments, approximately 2.5 million, received during the public comment period that closed on March 7, 2014," the State Department said in a statement.

While a Nebraska judge in February sided with landowners who argued that it was unconstitutional to grant the power of eminent domain to Gov. Heineman and, in turn, TransCananda to make way for Keystone, state Attorney General Jon Bruning appealed the ruling. The Lincoln Journal Star reported that "those following the case don't expect a decision until 2015."

Still, the delay was a cause for applause from the pipeline's opponents.

One point is clear: without a broad and brave movement, DC would have permitted this dumb pipeline in 2011. So on we go

"This is a huge victory for climate champions and communities from Alberta down to Nebraska and the Gulf," All Risk, No Reward Coalition spokeswoman Rachel Wolf said. "Every day without Keystone XL is a day that we keep high-carbon tar sands in the ground. The State Department's announcement to postpone a final decision on Keystone XL pending further certainty on the Nebraska route confirms, yet again, that this project not permit-able.
"This export pipeline fails the climate test, fails the jobs test, and doesn't even have a legal route."
To Tom Steyer and NextGen Climate, the delay only emphasizes the fact that it's a horrible idea.

"First, since the pipeline would significantly increase carbon pollution, we know that it fails the climate test laid out by President Obama last year," Steyer said. "Keystone XL is the economic key to unlocking the Alberta tar sands. As Canadian oil interests have confirmed, the oil industry cannot maximize the extraction of some of the world's dirtiest oil without it.

Still, others would have preferred an outright denial of the 1,179-mile pipeline.

“It is deeply disappointing that Secretary Kerry and President Obama can’t yet muster the courage to stand up to the oil industry and reject Keystone XL," said Elijah Zarlin, CREDO's senior campaign manager. “Still, this is yet another defeat for TransCanada, tar sands developers like the Koch Brothers, and oil-soaked politicians. No doubt, the nearly 100,000 people who have pledged to risk arrest to stop Keystone XL played a key role in pushing the administration to more accurately consider the full impact of this project—which must clearly result in rejection.

"No delays will diminish our commitment to stopping Keystone XL."

Keystone XL’s Environmental Impact an Afterthought on ‘Meet the Press’