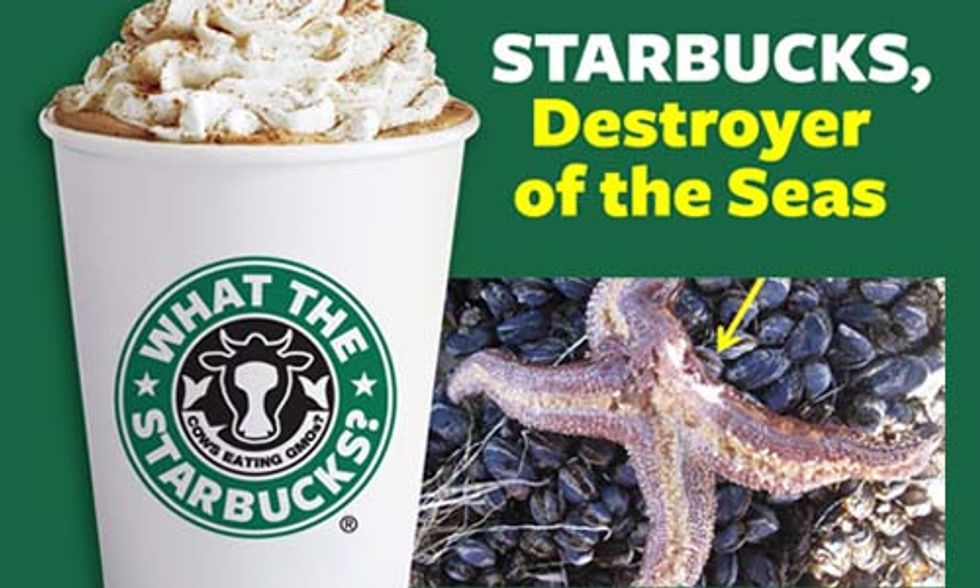 Who knew that a Starbucks latte has the power to harm a baleen whale?

People everywhere are realizing that the way we're raising food is impacting our natural world. Baby boomers voting with their dollars helped jump-start solar power. Now it's the millennials' turn to lead the way by supporting conscious food and beverage brands, along with the regenerative agriculture movement that counteracts carbon dioxide pollution.

For the health of our planet, we all need to shift to the compost, cover crops, crop rotation and planned grazing of “carbon farming." To learn more about carbon farming, visit Kiss the Ground, Regeneration International and the Soil Not Oil Coalition, which on Sept. 4-5 will host the 2015 Soil Not Oil International Conference in Richmond, California, with keynote speaker Dr. Vandana Shiva.

A Whole Lot of Killing Lattes

While the public's climate attention is focused on CO2 levels in the atmosphere, a far greater planetary threat is ocean acidification. The burning of oil and coal, along with the heedless agricultural practices of big agriculture with its huge carbon dioxide emissions, are devastating marine ecosystems. The Natural Resources Defense Council's YouTube film Acid Test shows how, when excess carbon falls into the sea, it adversely affects all oceanic life—from the tiny plankton now struggling to form their shells in acidified waters to the whales that feed upon those plankton.

Starbucks, the iconic global coffeehouse chain, wears a veneer of corporate social responsibility. Ironically, its mermaid logo was chosen, more than 40 years ago, because Starbucks wanted a nautical theme to capture the seaport spirit of its Seattle headquarters. But the company's ethical behavior falls short of its image, and the Starbucks supply chain is now an oceanic disaster—a killing machine contributing to the acidic seawater now threatening marine life.

Given the company's location in majestic Puget Sound, it's sad that CEO Howard Shultz is ignoring science to do business in a way that's contributing to ocean acidity and causing the impending deaths of Pacific oysters, Coho salmon and Orca whales.

Did you know that Starbucks is a bigger purveyor of industrial dairy products than of coffee? Yes, the lattes sold by the chain make use of far more industrial milk than they do coffee beans, and people are waking up to this fact. Rocker Neil Young's latest album, The Monsanto Years, features lyrics declaring: “Yeah, I want a cup of coffee but I don't want a GMO; I like to start my day off without helping Monsanto."

By switching to organic milk, Starbucks could show leadership and help shift the nation away from its dangerous reliance on concentrated animal feeding operations (CAFOs). Click here to urge Howard Shultz to make the switch.

Acidifying Our Way to an Ocean Apocalypse

Something's already horribly wrong with our oceans. In 2015, thousands of emaciated baby sea lions have washed up along the California coastline, and West Coast starfish are in a massive die-off.

The ongoing decrease in the pH of the Earth's oceans, caused by the uptake of CO2 from the atmosphere, is what's creating the ocean acidification that's wreaking these kinds of havoc.

Leading ocean scientists agree that acidification is killing off the algae that provide 66 percent of the planet's oxygen supply. Our acidic oceans (30 percent more so in the last 50 years, according to the National Oceanic and Atmospheric Administration) are making it hard for creatures like lobsters and oysters to form their shells.

What's not being widely reported is the actual main source of the massive amounts of CO2 falling into the sea and causing acidification. Industrial agriculture, with meat and dairy enterprises the leading villains, releases more greenhouse gas emissions than Chevron, Exxon, and the transportation sector combined.

Will Starbucks take the high road and support the regenerative agriculture that works to sequester carbon back into the soil where it belongs? Otherwise, I have to ask: What will Starbucks shares be worth when all the fish are dead and our oxygen supply has been reduced by half? Let's not wait to find out.

Please voice your concerns on the Starbucks page.

John W. Roulac, founder and CEO of the superfoods company Nutiva, has also founded five ecological nonprofit groups, including GMO Inside and the Nutiva Foundation. John has written four books, including Backyard Composting and Hemp Horizons.

$51 Million: That's How Much Big Food Spent So Far This Year to Defeat GMO Labeling

Vandana Shiva: 'We Must End Monsanto's Colonization, Its Enslavement of Farmers'