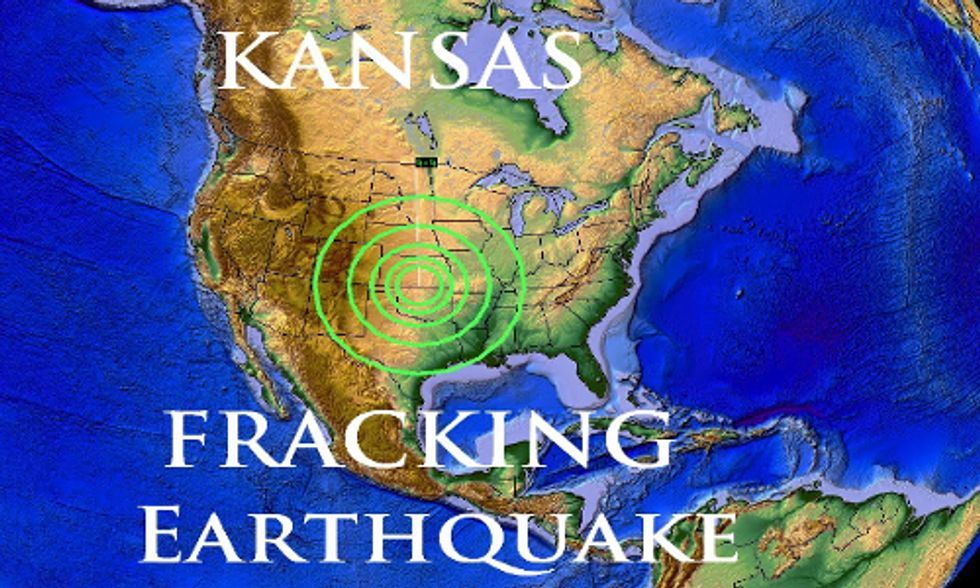 It seems unlikely that Kansas, known as one of the most conservative states in the U.S. and home to fossil fuel barons the Koch Brothers, would take action against the oil and gas industries. But in the face of a new wave of earthquakes attributed to the underground injection of fracking wastewater, its industry regulating body, the Kansas Corporation Commission (KCC), ordered a reduction of wastewater injection in two counties abutting Oklahoma, finding that increased earthquake activity correlated with increasing volumes of injected fracking water.

Kansas has taken action in the face of a wave of earthquakes tied to fracking operations. Image credit: Dutchsinse.com

"Because individual earthquakes cannot be linked to individual injection wells, this order reduces injection volumes in areas experiencing increased seismic activity," said its official report. It added, "The commission finds increased seismic activity constitutes an immediate danger to the public health, safety and welfare. The commission finds damage may result if immediate action is not taken."

The commission's report pointed to findings by the U.S. Geological Survey (USGS) that the number of earthquakes in Kansas has risen over the past several years.

As a result of this jump in earthquake activity, Kansas Governor Sam Brownback convened a task force last year which delivered its Seismic Action Plan in September. The commission issued its order a few weeks ago. While it doesn't ban injection wells, it limits them, imposing fines on companies that don't comply. It will no longer issue permits for certain types of high-volume injection wells in the two impacted counties.

The Tulsa World reports that the Kansas Corporation Commission's new order resulted from a complaint filed by a citizen, Frank Smith, who lives in the affected area. He said that earthquakes have damaged homes, businesses and a historic courthouse.

“Prior to the ruling, we had zero protection here in Kansas, and Oklahoma at least gave a bit more than lip service to looking out for the welfare of its residents,” said Smith.“The KCC has now taken a much more proactive stance than I feel Oklahoma has done."

In Kansas' heavily fracked neighbor to the west, regulators and scientists have been under pressure from its oil and gas industry to downplay the link between wastewater injection and its dramatic increase in earthquake activity.

A trove of state government emails obtained by media in response to a public records request revealed that Oklahoma state seismologist Austin Holland had been called into a meeting with Oklahoma City-based oil and gas tycoon Harold Hamm where Hamm expressed his "concern" that earthquakes were being linked to the fracking process. Holland called that meeting "intimidating."

The Tulsa World reported that, when asked at a recent town hall meeting whether Oklahoma is learning from other states how to stop man-made earthquakes, Holland nodded and said  “Earthquakes don’t stop at state lines."

Apparently, aggressive action does. The paper said that, in contrast to Kansas, whose report and order are posted online, Oklahoma Governor Mary Fallin has convened an earthquake committee that is "holding meetings that are closed to the public. The committee does not plan to issue any reports or recommendations."