Can solar panels be recycled? 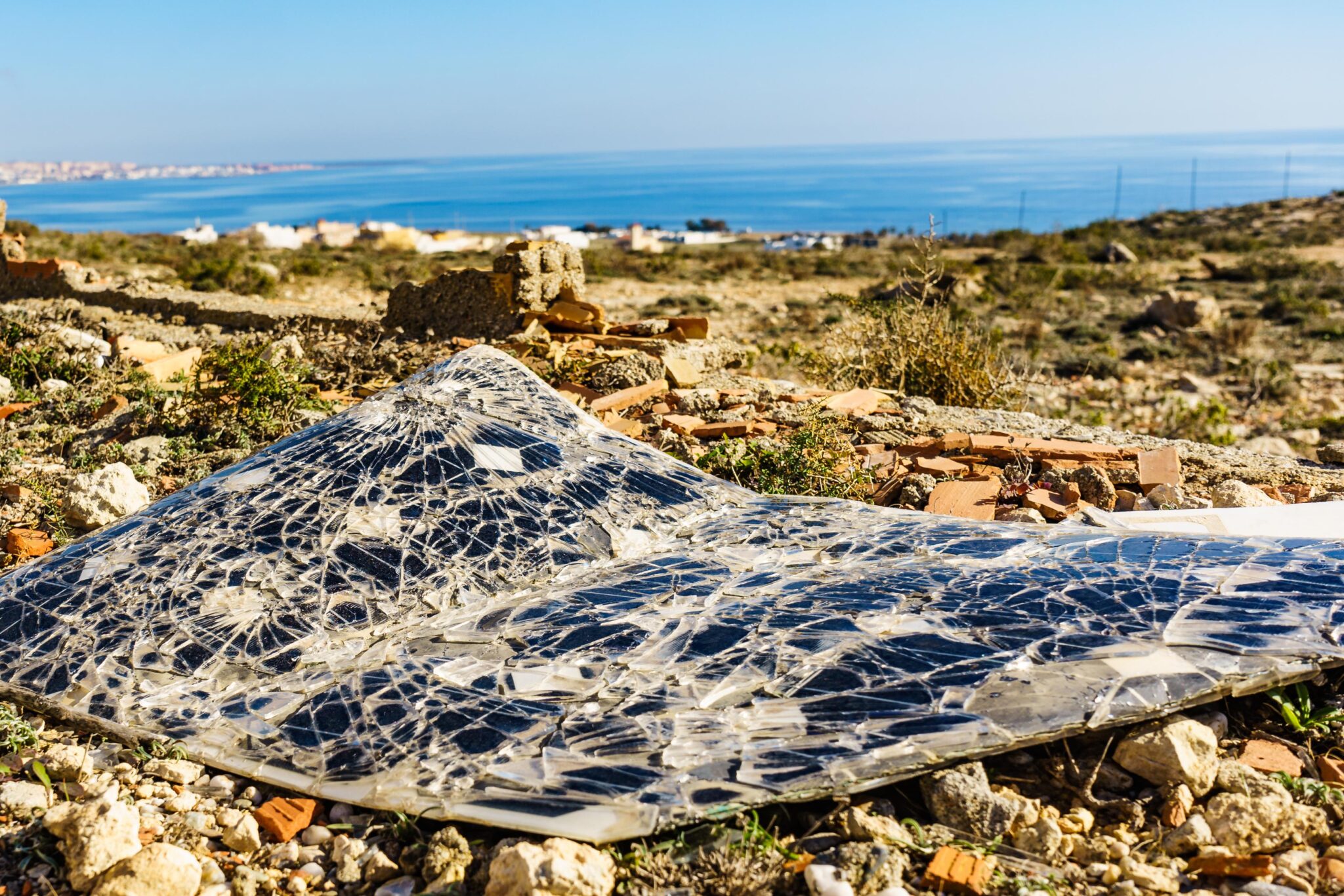 Despite challenges to growth from the pandemic, the U.S. solar energy market set another record with 19.2 GW of solar installed in 2020. That’s well over 50 million solar panels. Over the next 10 years, the Solar Energy Industries Association projects that nearly 350 GW will be installed, more than 18 times the amount of solar installed in 2020. That means more than 1 billion solar panels will be actively collecting solar energy throughout the U.S. alone over the next decade.

This pace of growth is tremendous — and great news for the environment. However, we at EcoWatch won’t deny that solar panels do have an impact (albeit a nominal one when compared to that of oil drilling, fracking or coal mining). One of the most common challenges surrounding solar energy is the amount of waste that these panels will produce after their 25-year lifespan.

In order to avoid an onslaught of e-waste accompanying our rapid solar development, scientists are developing ways to recycle solar panels, minimizing their environmental impact. Entrepreneurs and economists alike are also eyeing the huge financial value that a practical recycling method would offer.

So, can solar panels be recycled? The short answer is yes, but the process needs refining. Here’s what we know.

A number of the materials within a solar panel are non-renewable resources; copper, silicon, gallium and indium may be abundant, but they’re still finite. The solar boom has already placed a huge strain on efforts to acquire these materials, and we’re readily seeing forecasts of severe copper shortages over the next decade.

Recapturing these materials from solar panels presents an opportunity to ease supply chain issues and lower the need for new materials, which in the long run will only lower the cost of solar further.

How to Recycle Solar Panels

When talking about how to deal with solar panel waste and sustainable end-of-life processes, it helps to understand the different physical elements of solar photovoltaic panels. Most solar panels are made with the following basic components:

For the purposes of this article, we’ll be examining monocrystalline and polycrystalline silicon PV panels, which are by far the most common types of solar panels.

Though aluminum, glass and copper are all recyclable materials, recycling a solar panel isn’t as simple as dropping it off at your local recycling plant. The materials within the panels must be separated and recycled separately, which can be a complex process. Solar panels are also layered with polymer sealing, which can contain chemicals like ethylene-vinyl acetate (EVA), complicating the process of recycling glass. If the encapsulant can be removed from the glass, the glass can be recycled.

But what about recycling the silicon solar cells? Though it’s possible, it’s a little more complicated than recycling basic metals and glass.

Silicon solar cells are typically derived from quartz, a mineral made from the two most abundant elements on earth: oxygen and silicon. This quartz must be purified, a process that varies by manufacturer, in order to end up with silicon crystals pure enough for modern solar cells. However, similar to common plastic, pure silicon degrades slightly when recycled. This means that its quality will suffer with each subsequent use of the material.

So, where does this leave us?

As it stands today, there are two common methods for recycling solar panels: mechanical and chemical recycling.

In recycling facilities, these various materials are crushed into small pieces and broken down into a material similar in consistency to sand. From there, the material is sent through a magnetic separation process that removes and isolates the metals within. These valuable materials can be reused to make glass, roadways, insulation and more.

The most advanced forms of mechanical recycling can recover 99% of raw materials at a pace of one solar panel per 40 seconds. Methods currently in use, such as First Solar’s recycling process, are capable of reusing up to 90% of the semiconductor material and 90% of the glass in its modules. These facilities are still limited, however, and most solar customers don’t have access to them at this point.

Chemical (or thermal) recycling uses chemical treatments and heat to delaminate a solar panel, separate its chemical components and recapture the pure silicon within it. Research in this arena shows promising results, yet efficiency on a large scale still lacks. Additionally, the production and necessary treatment of potentially harmful gases associated with this recycling process still present challenges to its commercial viability.

We usually cite the lifetime of solar panels at 25 years, as most warranties only cover up to that mark. However, the vast majority of solar panels can be used longer than 25 years, though their efficiency suffers over time. As a result, most of the e-waste associated with solar panels comes from old panels that still produce energy, just at a lower level.

This leads to another question: Can solar panels be reused or refurbished? Certainly, this method is the most economical due to how little processing would be required relative to mechanical, chemical and thermal recycling methods.

Not every solar installation will require the best solar panels on the market, so reused, low-efficiency panels do offer solutions for small-scale solar needs, like off-grid systems, solar chargers, lights for street signs and other applications that don’t necessarily require new panels.

But what about the refurbishment of defective or broken panels? Companies like Rinovasol specialize in this type of solar panel refurbishment, extending life cycles through a process of defect analysis, refinishing and recoating with a polymer of their own development. Rinovasol’s process is garnering international attention, and it is shown to extend solar panel lifetimes by about 10 years.

Companies That Will Help You Recycle Your Panels

Though promising methods of solar recycling, refurbishment and re-use are in development, they still exist on a very small scale in the U.S. However, there are companies taking the first steps into this new area of the solar industry and may offer a convenient way for you to sustainably dispose of your solar panels.

With facilities in the U.S., Germany and Malaysia, First Solar’s recycling process achieves high recovery rates (around 90%) and offers a convenient, effective disposal method for your solar PV modules.

We Recycle Solar provides comprehensive solutions for manufacturers, installers and solar contractors needing large-scale solar panel disposal and PV recycling. The company’s approach allows home and business owners to cash in on any residual value of damaged panels while complying with regulations regarding panel removal.

RecyclePV offers a simple process for removing and disposing of unwanted solar panels. Achieving a recovery rate of 90%, RecyclePV shows a great deal of promise for solar recycling. If it can ramp up its scale in the U.S. solar market, RecyclePV may be a leading solution to solar waste management problems.

The Future of Solar Recycling: A Closed Loop?

Have you ever heard the term “circular economy?” Well, solar panel recycling offers the perfect example to demonstrate its feasibility and benefits.

A circular economy is a system of closed loops in which raw materials, components and products lose as little value as possible. Though still in the early stages, top solar companies like SunPower are leading the charge toward a circular solar economy, designing solar panels that can be perpetually recycled. This would close the loop on the materials involved in the manufacturing process, lowering the costs and impact of solar power systems.

It should be noted that SunPower manufactures the most efficient solar panels on the market, demonstrating that sustainability (when baked into the process) has little to no effect on the price or quality of solar products.

SunPower, First Solar and other leading companies show us that closing the loop on the solar economy is possible (dare I say practical, too?). So what’s stopping the rest of the nation’s top solar companies from doing the same?

Sadly, the U.S. still lags far behind in its clean energy policies. The federal government has zero regulations in place requiring solar manufacturers to design closed-loop products, has zero laws barring the disposal of solar panels in landfills and offers zero support for solar recycling programs, despite its ambitious goals for solar development nationwide.

The government can’t be the sole driver of change, however. With any luck, our nation’s solar manufacturers will follow SunPower’s lead and realize the benefits of developing technologies that lessen solar’s growing impact.