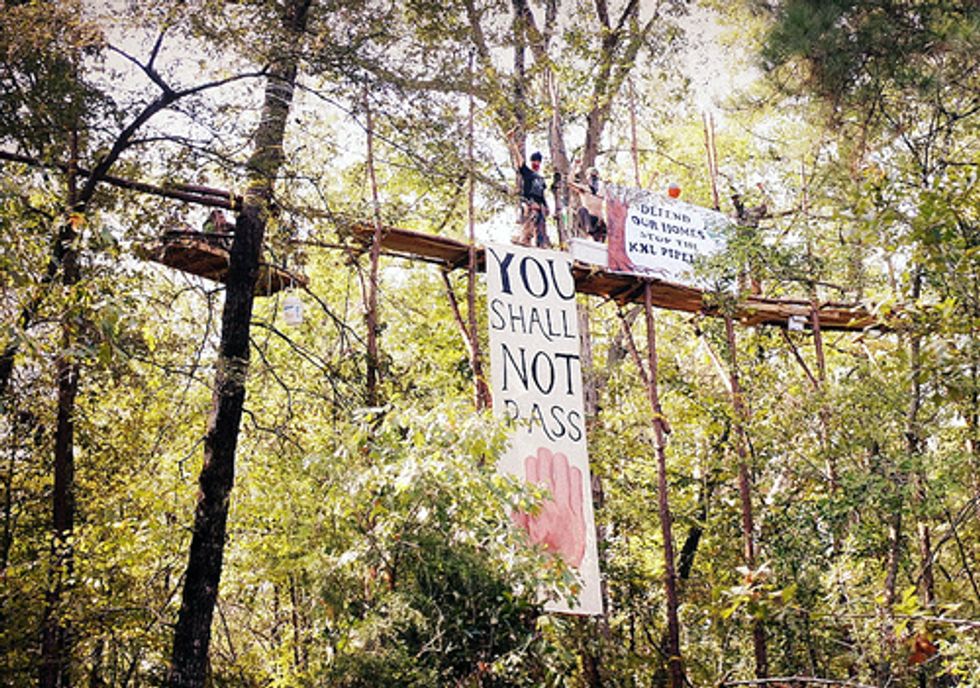 As we write, our friends with the Tar Sands Blockade are blocking construction of TransCanada's Keystone XL pipeline in the woods of Texas. For the past six months they have built a movement of climate activists, rural landowners, Texans, Oklahomans and people from all over the country to fiercely resist it. For two weeks, they have captured the imagination of the world with a daring tree-sit and bold ground actions near Winnsboro, TX that have delayed TransCanada's operations.

It is clear what is at stake. NASA's leading climate scientist Dr. James Hansen has called the Keystone XL pipeline, "a fuse to the largest carbon bomb on the planet." If all the carbon stored in the Canadian tar sands is released into the earth's atmosphere it will mean "game over" for the planet.

In 2011, we saw the Tar Sands Action galvanize environmental and social justice communities in an unprecedented show of unity during the sit-ins in front of the White House. Every day members of Indigenous communities, faith communities, labor communities, anti-mountaintop removal movements, anti-fracking movements and many more stepped forward and put their bodies on the line in solidarity. In the year since, we have witnessed people from the Lakota nation in South Dakota and from Moscow, Idaho putting their bodies in roads and highways blocking large transport trucks carrying oil refining equipment to develop further tar sands extraction. Now, the Tar Sands Blockade has taken the next logical step confronting climate change.

If we are determined to prevent the pursuit of extreme energy from destroying our communities, natural systems and climate, then peaceful, yet confrontational, protests like the Tar Sands Blockade are necessary actions for change.

Let us be clear: there is not an inch of daylight in between us and those blocking construction of the Keystone XL pipeline in Texas. We stand with them as we've stood with those fighting mountaintop removal coal mining in Appalachia, those defending old growth forests in Cascadia and those challenging nuclear power across this country.

We stand in solidarity with those who stand up for us all.