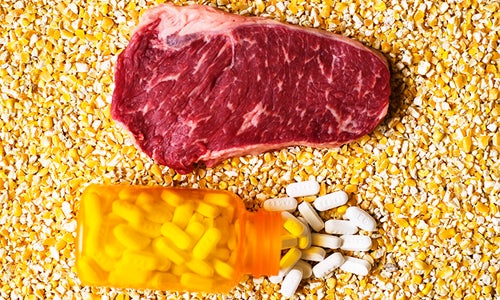 The demand for food products “raised without antibiotics” is growing fast. In 2012, sales of these products had increased by 25 percent over the previous three years (1).

The overuse of antibiotics in food-producing animals is being blamed for the increase in resistant bacteria, also known as “superbugs.” When these are passed to humans they can cause serious illness.

However, other experts suggest that antibiotic use in food-producing animals poses very little risk to human health. 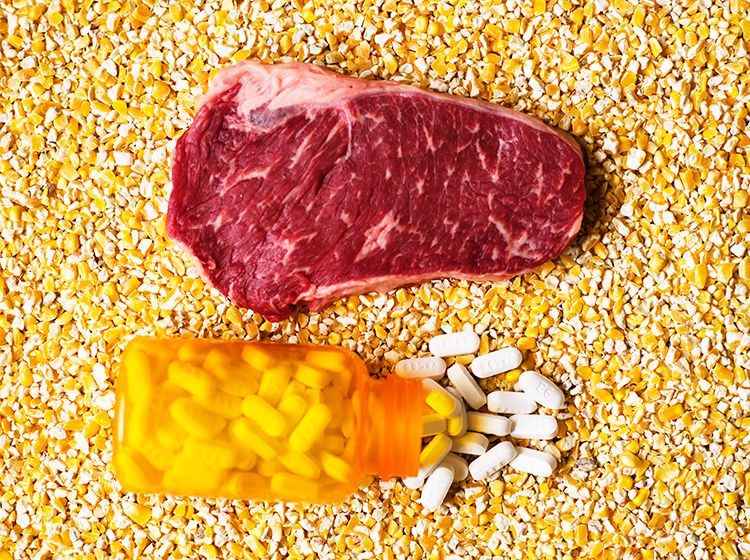 This article explores how antibiotics are used in foods and their potential consequences for your health.

Antibiotic Use in Food-Producing Animals

Antibiotics are drugs used to treat bacterial infections. They work by killing or stopping the growth of harmful bacteria.

Since the 1940s, antibiotics have been given to farm animals like cows, pigs and poultry in order to treat infections or prevent an illness from spreading.

Low doses of antibiotics are also added to animal feed to promote growth. This means a greater production of meat or milk in shorter periods of time (2).

For these reasons, antibiotic use has become widespread in agriculture. In 2011, 80 percent of all antibiotics sold in the U.S. were for use in food-producing animals (3).

Bottom Line: Antibiotics are drugs used to treat bacterial infections. They are widely used in animal agriculture to treat disease and promote growth.

The Amount of Antibiotics in Foods is Very Low

Contrary to what you may think, the chances of you actually consuming antibiotics through animal foods is extremely low.

Strict legislation is currently in place in the U.S. to ensure that no contaminated food products are able to enter the food supply.

Similar laws are in place in Canada, Australia and the European Union.

Additionally, vets and animal owners are required to ensure that any animal products they produce are drug-free before they can be used as food.

Drug withdrawal periods are enforced before treated animals, eggs or milk are used as food. This allows time for the drugs to completely leave the animal’s system.

The U.S. Department of Agriculture (USDA) has a strict process of testing all meat, poultry, eggs and milk for unwanted compounds, including antibiotic residues (4).

Bottom Line: Due to strict government legislation, it is extremely rare that antibiotics given to an animal would enter your food supply.

In fact, figures from the USDA showed that the amount of animal products found to have antibiotic residues were extremely low and those that did were disposed of.

In 2010, less than 0.8 percent of animal food products tested positive for some form of contamination, including antibiotic residue (5).

Products confirmed as positive do not enter the food chain. Producers with repeat violations are publicly exposed—a system that discourages any misconduct.

Bottom Line: There is no evidence to suggest that antibiotics are being consumed from animal food products, let alone causing harm to humans.

The Overuse of Antibiotics in Animals Can Increase Resistant Bacteria

Antibiotics are generally fine when used properly for treating or preventing infections.

However, excessive or inappropriate use is a problem. When antibiotics are overused, they end up becoming less effective for both humans and animals.

This is because bacteria that are frequently exposed to antibiotics develop a resistance to them. As a result, the antibiotics are no longer as effective at killing harmful bacteria. This is a great concern for public health (6).

The U.S. Food and Drug Administration (FDA) has recognized this concern, updating its regulations to reduce the unnecessary use of antibiotics in livestock.

Bottom Line: Excessive antibiotic use can increase resistant bacteria, making the antibiotics less effective for both animals and humans.

Resistant Bacteria Can Spread to Humans, with Serious Health Risks

Resistant bacteria can be passed from food-producing animals to humans in a number of ways.

If an animal is carrying resistant bacteria, it can be passed on through meat that is not handled or cooked properly.

You can also encounter these bacteria by consuming food crops that have been sprayed with fertilizers containing animal manure with resistant bacteria.

One study found that people living close to crop fields sprayed with pig manure fertilizer are at a higher risk of infection from the resistant bacteria MRSA (7).

In the U.S., every year around two million people get infected with bacteria resistant to one or more of the antibiotics normally used to treat the infections (9).

Of those people, at least 23,000 die each year. Many more die from other conditions made worse by the infection (9).

Bottom Line: Resistant bacteria can be transferred from animals to humans through contaminated food products, causing infections and even death.

Resistant bacteria in supermarket foods is a lot more common than you might think.

Of 200 U.S. supermarket meat samples of chicken, beef, turkey and pork, 20 percent contained Salmonella. Of these, 84 percent were resistant to at least one antibiotic (10).

Many products claim to be “raised without antibiotics,” including some that are labeled organic. This does not mean these products are free from resistant bacteria.

Another study found that out of 213 samples, the frequency of antibiotic-resistant E. coli tended to be only slightly lower for chicken raised without antibiotics, compared to regular chicken (15).

Why You Probably Don’t Need to Be Concerned

There is no clear-cut evidence directly linking antibiotic use in food-producing animals to increased illness due to resistant bacteria in humans.

One review concluded that the danger to health is very small because proper cooking destroys the harmful bacteria (16).

It may actually be the human use of antibiotics that causes the majority of bacterial resistance (16).

Interestingly, the spread of bacteria such as MRSA from infected pigs to farmers is common (17).

However, transmission to the general public is rare. A study from Denmark reported that the likelihood of transmission for the population was only 0.003 percent (18).

If the food products are cooked properly and good hygiene practices are followed, then the risk is extremely low.

Bottom Line: There is no clear-cut link between antibiotic use in animals and resistant bacteria infections in humans. The risk to human health is likely to be small, since adequate cooking destroys bacteria in food.

How To Minimize Your Risk of Illness

It may be impossible to completely avoid resistant bacteria in animal foods.

However, there are things you can do to significantly reduce your risk:

The debate on antibiotic use in animals still continues.

It can contribute to the development and spread of drug-resistant bacteria, which is a potential risk to public health.