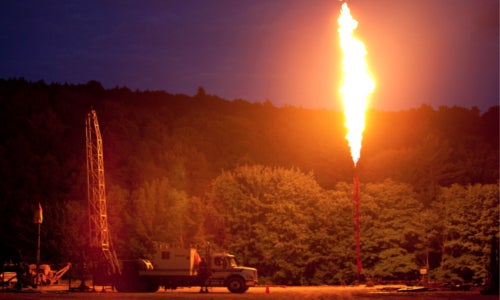 Jolynn Minnaar had no intention of making a documentary exposing the evils of fracking. In fact, the Karoo, South Africa native viewed the arrival of a shale gas extraction industry as an exciting opportunity for development and employment in home district.

Her opinion changed after visiting the U.S.

There, she learned about the fires, dark brown, methane-infused water and many more by-products of fracking. She documented her findings in the appropriately titled, Unearthed, which receives its world premiere June 10 and 11 at the Sheffield International Documentary Festival in Sheffield, a city in the United Kingdom’s South Yorkshire county.

If its stunning, action-packed trailer is any indication, Unearthed should live up to the production team’s claim of it being the most extensive collection of material covering fracking. It has already been nominated for Audience and Green film awards.

“Despite my optimism for shale gas, after visiting the United States to cross-check the promises made to South Africa, I now gravely admit that fracking stands to hurt the ones it claims to help the most,” Minnaar said in a press kit. “I dedicate Unearthed to the rural, marginalized communities who are least able to withstand the arrival of the shale gas industry, whether in the Karoo, Europe or the United States.”

“With an expanding global population and excruciating demands on natural resources, it is no secret that the world is in trouble,” Minnaar said. “The world, as we know it, urgently needs to hit the refresh button. May Unearthed become a catalyst in that endeavour.”