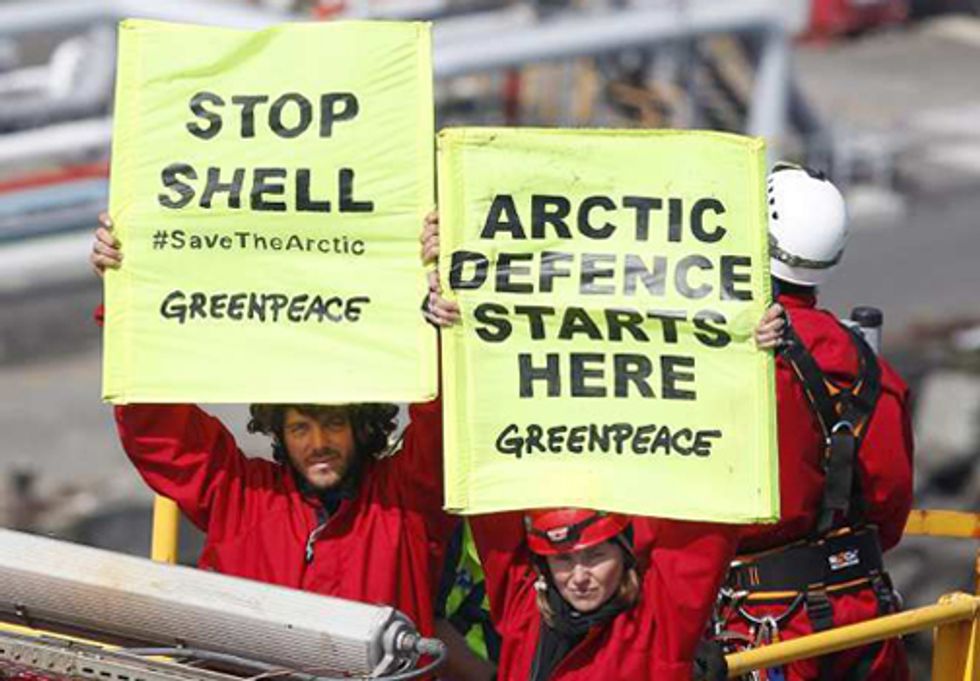 On March 19, in a small courtroom in Alaska, David met Goliath once again. Greenpeace USA's small team of lawyers came face to face with representatives from Shell, the multinational oil company seeking one of the broadest legal injunctions ever sought against an entirely peaceful environmental group. The judge's decision will resonate far beyond Anchorage and help determine the future of activism in this country.

A little backstory is needed here. In a desperate attempt to shore up its proven reserves, Shell is betting the ranch on new drilling in Arctic waters. Its executives purr reassuringly about 'energy independence,' as if one more hit of the black stuff will be enough to lower gas prices, ease our financial pain and bring back the dreamy nineties. Rather than seeing melting sea ice for what it really is—a flashing warning sign of continental proportions—this increasingly desperate company wants to drill for more of the fossil fuel that is causing the problem in the first place.

Forget the remoteness, fierce storms, unique species or the handful of spill response vessels for a second. Instead close your eyes, breathe deeply, and think about what it will mean to reflect that a 21st-century company chose to put its finest engineers on a project that actually made the climate problem worse. While storms battered our coastlines and drought plagued our farmers, Shell squeezed out the last drops of oil and ignored clean energy like it was a passing fad.

As you might have guessed, Greenpeace is pretty much against the gig. Our supporters across the world have sent more than 250,000 emails to Shell's executives pointing out the painful irony in their position. The actor Lucy Lawless joined Greenpeace New Zealand to prevent one of their Arctic drillships from leaving port for the long trip to Alaska. And that's when Shell decided to pull out the big guns.

Our offices in Alaska, San Francisco and Washington, D.C. were served with copies of the lawsuit simultaneously. After a quick scan our lawyers couldn't believe the scope of these documents. Shell was basing much of its complaint against Greenpeace USA on an activity 6,000 miles away conducted by Greenpeace New Zealand. The company proposed a restraining order covering anyone acting "in concert" with Greenpeace from "tortiously or illegally interfering with Shell's property" anywhere in the U.S. Never mind that there are already laws against interference, trespass or nuisance. What Shell wanted was an extraordinary legal hammer that could have been dropped on any one of our 500,000 email subscribers who chose to act a little more robustly than the company would have liked.

The judge rejected the bulk of this draconian request, instead issuing a temporary restraining order that applies to Shell's drilling rigs and support vessels. But today the company is back in court, asking for an injunction that would once again widen the suit to include 80-year-old grandmothers in Idaho alongside students fighting for their future with Greenpeace.

It's a mark of how effective corporations have become that in modern America protest is now seen as a dirty word. Today, any challenge to the dominant business model is condemned as unpatriotic, a slur on Milton Friedman's great legacy. Lest we forget, an inefficient economy driven by oil was not part of the Constitution, nor is it mentioned in the national anthem. The 1% has used its power to create the illusion that there is only one way to power America's greatness and restore the country to its proper place in the world. Somewhere along the way fossil fuels have become a pillar of democracy instead of what they really are—an enemy of the state.

But something is changing. When companies like Shell use expensive and frivolous lawsuits to silence opposition to their plans, people take notice. They may have all the money in the world but there are now hundreds of thousands of people who see the folly in this doomed enterprise. Arctic drilling is one of the great mistakes of our age and it will not be allowed to happen. Whatever happens in court, Greenpeace will continue to oppose Shell's plans peacefully and vigorously because we, the people, have truth on our side. That's something even billionaire oil companies can't buy.