Is Giant Sequoia National Monument Next on the Hit List? 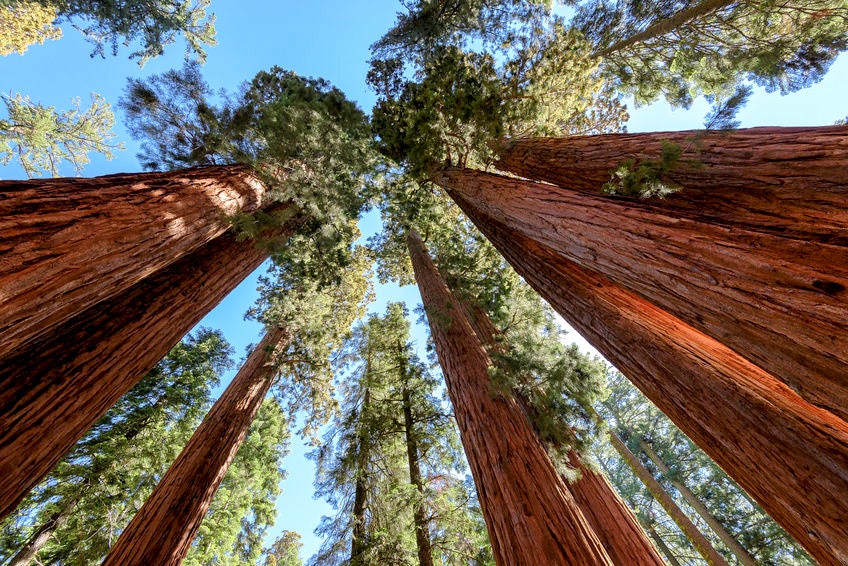 Sequoiadendron giganteum. That’s the scientific name for the giant sequoia: the mammoth trees found in California’s Sierra Nevada that are the largest organisms on Earth, and among the longest-lived. Biologists estimate that about half of all sequoias live in Giant Sequoia National Monument, a 328,000-acre preserve in the Southern Sierra Nevada established by President Clinton in 2000.

Now that national monument is in jeopardy.

When President Donald Trump signed an executive order in April directing Interior Sec. Ryan Zinke to review national monuments established since 1996 and larger than 100,000 acres to determine whether they should be rescinded or reduced in size, it appeared that California’s national monuments were relatively safe. Although California is home to six of the 27 monuments under review (more than any other state), its monuments haven’t been as controversial as others on Zinke’s list.

So far, much of the Zinke’s attention has been focused on Utah’s Bears Ears—which earlier this month the interior secretary said he was likely to recommend downsizing—and Maine’s Katahdin Woods and Waters National Monument, where, despite strong support from local residents and the rest of the state’s political establishment, Gov. Paul LePage is waging a one-man campaign to abolish the monument. It seemed likely that the six California monuments (Mojave Trails, Sand to Snow, Berryessa Snow Mountain, San Gabriel Mountains, Carrizo Plain, and Giant Sequoia) would escape the unprecedented Trump-Zinke assault on public lands.

“When we first heard that Trump wanted to look into the monuments, we thought it wouldn’t do much to change things here,” said Arturo Rodriguez, policy coordinator for Wild Places, an environmental organization in the southern Sierra Nevada. “Now, we’ve started organizing and calling friends” to protect Giant Sequoia National Monument.

The fight over the future of Giant Sequoia will intensify Tuesday, June 27, as supervisors in two California counties vote on measures to roll back protections for forests within the monument. Supervisors in Tulare County will consider a resolution urging Sec. Zinke to “clearly permit the removal of dead or dying hazard trees and to allow the U.S. Forest Service to actively manage the groves”—a demand that echoes the wishes of logging companies, which for years have sought to cut timber in the monument. Also Tuesday, supervisors in Kern County will vote on a resolution calling on Sec. Zinke to reduce Giant Sequoia National Monument by 200,000 acres.

While the Kern County proposal to slash the monument by two-thirds would still protect the groves where the giant sequoia are found, conservationists say the idea ignores the biological necessity of protecting the entire ecosystem. For the sequoias to thrive, the forests surrounding them also have to thrive, too.

“This is the remaining extent of the largest trees on the planet, the largest living things on the planet, and they exist within the context of an area that has been heavily logged,” said Paul Ringgold, chief program officer of Save the Redwoods League. “In addition to the 90,000 acres that are specific to the giant sequoia groves, we believe that the rest of the area is deserving of protection so that it can function as a whole ecosystem, and not just as a zoo or a bell jar placed over these remaining sequoia groves and calling it good.”

“These groves are part of a larger web of life,” said Ryan Henson, senior policy director at the California Wilderness Coalition. “They are surrounded by tree species that would be giants in and of themselves if they weren’t dwarfed by the sequoias.” Henson said that the current 300,000-plus acres of protection are necessary to give sequoias the ability to spread to new areas as temperatures increase due to climate disruption. “Giants need room to roam—even if they’re trees.”

Some of the arguments being deployed against Giant Sequoia misrepresent basic facts about how the monument is being managed and appear to be a thinly veiled attempt to allow commercial logging in the area, conservation groups say. The Kern County draft resolution, for example, says that “dying trees from the many years of drought are directly threatening our mountain communities,” in the words of the Kern County draft resolution. But according to Susan Britting, executive director of Sierra Forest Legacy, the management plan for the monument allows for select logging along Forest Service roads to reduce fire risk and intensity. The wildfire issue, Britting said, “is a red herring.”

And while monument opponents claim there wasn’t adequate public input in President Clinton’s decision to create the monument— “local officials were not invited for public comment, feedback was not received from the community,” the Tulare County draft resolution says—the effort to create the monument was, in fact, broad-based. In the lead up to monument designation, 65 California state legislators and 16 members of Congress from California wrote to President Clinton asking him to protect the area. The Sierra Club gathered some 600,000 postcards from people in support of monument creation. “The vetting went on for several years, with stakeholders and researchers examining the benefits of that landscape from an economic value, a water quality and habitat value, and looking at the various pros and cons,” Ringgold said.

“The way I see it, and this is just my read, is that the logging companies are letting the county commissioners carry water for them” said Chad Hanson, director of the John Muir Project, a forest watchdog group. “They have a history of logging that area. There is mature timber there that they would love to log if they could.”

Indeed, even after the monument was created, logging companies were trying to cut timber there.

The original management plan for the monument—drafted by the George W. Bush administration and released in 2005—allowed for commercial logging in the area. Conservation groups sued to stop that plan, and in 2006 a federal judge ruled against logging in the monument. Since President Trump took office, the timber industry has begun lobbying for greater logging in the national forests.

Asked for its stance on Giant Sequoia National Monument, the California Forestry Association, a timber industry group, said: “We fully support the protection of the giant Sequoia trees and know that the best way to protect them is to manage the surrounding forestlands by reducing the fuel loads and thinning the surrounding forest to help protect the giant sequoias from catastrophic wildfire. Restricting forest management within the 327,000 acres has created overly dense forestlands. These unhealthy forest conditions are being exacerbated by the bark beetle and are at risk of catastrophic wildfire.”

In response, Hanson, a forest and fire ecologist, pointed out that giant sequoias actually require fire for their seeds to effectively germinate and grow into saplings, and he noted that hundreds of scientific studies now conclude that post-fire habitat is some of the very best and most biodiverse wildlife habitat. “When the logging industry says ‘thinning’, they are really talking about intensive commercial logging projects that would destroy the giant sequoia forest ecosystems and associated forests in the monument,” Hanson said.

Even as some officials in Kern and Tulare counties make the case for downsizing the national monument, other community leaders have spoken out in favor of sustaining Giant Sequoia at its current size. Two weeks ago, the city council of Porterville, California—one of the primary gateway communities into the monument—debated a resolution calling for a reduction in the monument’s size. The Porterville city council ended up voting 3-2 against monument downsizing and decided to write a letter to Zinke in support of the monument.

While area environmentalists applauded the Porterville vote, the meeting left them worried about the political machinations that appear to be behind the push for monument reduction. One of the more interesting moments at the public meeting (which Wild Places filmed) occurred when council member Cameron Hamilton said that the monument-reduction resolution “came from Congressman McCarthy”—that is, Republican Kevin McCarthy, the House Majority Leader. McCarthy’s office did not respond to requests to clarify council member Hamilton’s statement.

“We don’t know McCarthy’s motivation,” said Rodriguez of Wild Places. But he says that his group and others remain cautiously optimistic that they will be able to successfully defend the monument. “It’s high on our priority list, and we’re doing everything we can to get the message out. This place is beautiful. Instead of decreasing it, we should be talking about increasing it.”

Reposted with permission from Sierra Magazine.