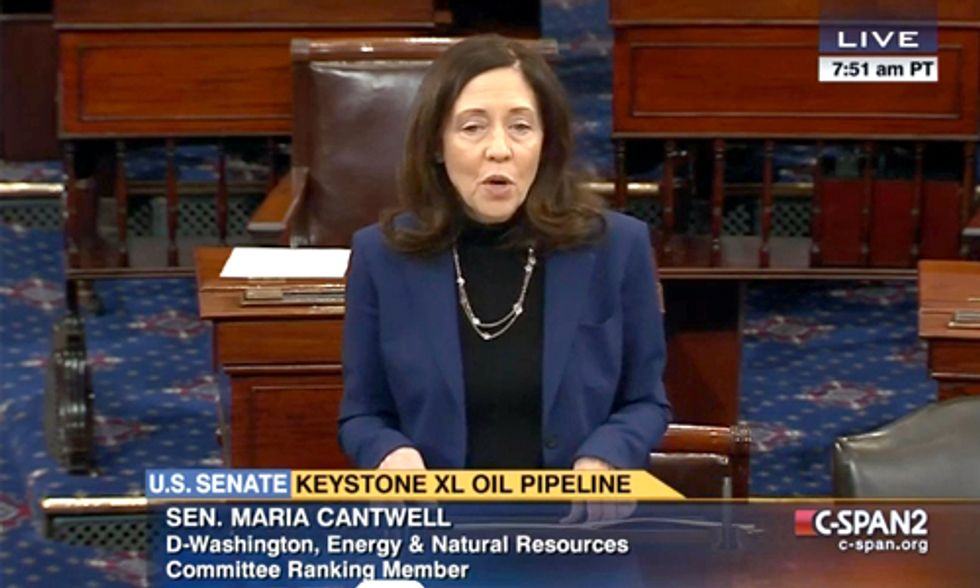 In the first day of debate of the Senate floor following its Monday vote to proceed, familiar arguments for and against the approval of the Keystone XL pipeline were trotted out, showing that the discussion wasn't going to bring any revelations and that no one was likely to be persuaded to change their minds.

According to Senator Whitehouse, the debate will continue for several more weeks before a vote takes place, with approval virtually inevitable given the bill's 60 sponsors. It'll then be up to President Obama to veto it as he's indicated he would.

The arguments mostly focused on the economic and jobs benefits of the pipeline, with supporters saying it would provide energy independence and enhance national security and opponents pointing to the small number of jobs and limited economic benefits compared to the environmental impacts. One popular argument from last year—that the pipeline would cause U.S. gas prices to decline—wasn't much in evidence for obvious reasons.

Pipeline supporters made effusive claims about the project's economic value. Senator Hoeven was especially extravagant, inexplicably claiming it would create "good-paying jobs that provide relief for budgets of households across the country."

"This is the largest shovel-ready project that’s ready to go, and it’s been held up for more than six years," said Senator Hoeven. "America got into World War II and won the war in less than six years. If we’re going to get economy growing and get people back to work, we can’t hold private investment up."

"This bill will also create thousands of jobs," Senator Manchin added. "I’ve heard argument, they're not going to be permanent. I don’t know of any permanent jobs we have after we build a bridge. But we have a lot of good construction jobs."

Senator Whitehouse tore apart the jobs argument with a battery of facts, calling the jobs figure, which both sides agree on, "a pittance" and comparing it to not only to other potential job creation vehicles but to the actual current job creation rate as well.

"There’s been an awful lot of talk about jobs in the last few days, but this opening gambit both obviously and demonstratively has nothing to do with jobs," he said.

"If this were about jobs, bring up instead the Shaheen/Portman energy efficiency bill, the bipartisan bill that the Republicans spiked last year. That bill has been estimated to produce nearly 200,000 jobs, more than quadruple the 42,000 jobs supported by the construction of the pipeline. If this were about jobs, bring up the highway bill. That bill was estimated to support 3 million jobs a year, 70 times the number of jobs from Keystone. 42,000 is a pittance compared to that. Right now the economy is adding over 70,000 jobs every week. In the three weeks we’ll argue about this bill, we’ll add five times as many jobs as it provides. We match Keystone in just four average days of job growth and yet we’re going to spend three weeks on this. If this were really about jobs, bring up an infrastructure bill, the kind our Republican friends have relentlessly spiked when they were in the minority. We could do really big things on jobs. You get 13,000 jobs on average for every billion spent on infrastructure. And we need the infrastructure. But instead we’re going … this."

Pipeline opponents talked extensively about climate change and the environmental impacts of building the pipeline, something that was largely ignored by its supporters. Senator Hatch said in passing, "Building the Keystone pipeline will be better for the environment than not building it," although he provided no facts to back this up. He also referred to "phony environmental arguments and accused unnamed "special interests" of trying to "muck up the process."

Senator Merkley hit hard on the issue of climate change.

"We’re debating whether or not the dirtiest oil in the world, the tar sands from Canada, are going to brought through the U.S. in a pipeline like a straw to Port Arthur, Texas to a tax-free export zone so it can be exported out of the U.S.," said Senator Markey. "What’s in it for our country? We’re going to take the environmental risks, but the benefits flow to the Canadian company."

"The key question is whether pipeline would contribute to global warming," he said. "Are there better ways to create jobs that would enhance rather than damage our economy? Building the Keystone pipeline would open the faucet to massive new reserves of tar sands that takes us in opposite direction of where we need to go. it takes us down the road to catastrophic climate change. Global warming is not some imaginary concept based on computer models of something that might happen 200 years from now.  I have special interest: it’s called planet earth. It trumps the Koch brothers, it trumps the oil industry."

Senator Bernie Sanders again offered his amendment, which was defeated in the Energy and Natural Resources Committee last week, to put the Senate on record as acknowledging the reality of climate change.

"It is the sense of Congress that Congress is in agreement with the opinion of virtually the entire worldwide scientific community that; one, climate change is real; two, climate change is caused by human activities; three, climate change has already caused devastating problems in the U.S. and around the world; four, a brief window of opportunity exists before the U.S. and the entire planet suffer irreparable harm and, five;  it is imperative that the U.S. transform its energy system away from fossil fuels and toward energy efficiency and sustainable energy as rapidly as possible."

Other senators have said they will also offer amendments, which are scheduled to be voted on next week.

Several pipeline opponents suggested that by dubbing the Keystone XL approval bill "SB 1" and making it the first item of business in the new session of Congress, the Republicans were clarifying their priorities, and they didn't dovetail with Senator Sanders' amendment.

"With all of the issues that our country faces, here we are debating a Canadian project," said Whitehouse. "A new majority has taken over the Senate and their first bill, their opening gambit is the Keystone pipeline. What is going on?"

He answered his own question.

"That premise clarifies what is happening here," he continued. "The fossil fuel industry has a shiny new Republican majority and it wants to take it out for a spin. That is what this Keystone opening gambit is about. This is somewhere between performance art, a show of obedience and a show of force. Well, fine. Take us out for a spin. Have your fun. But the laws of nature that turn carbon pollution into climate change and into ocean acidification aren’t going away."