Could the ‘Mangrove Effect’ Save Coasts From Sea Level Rise? 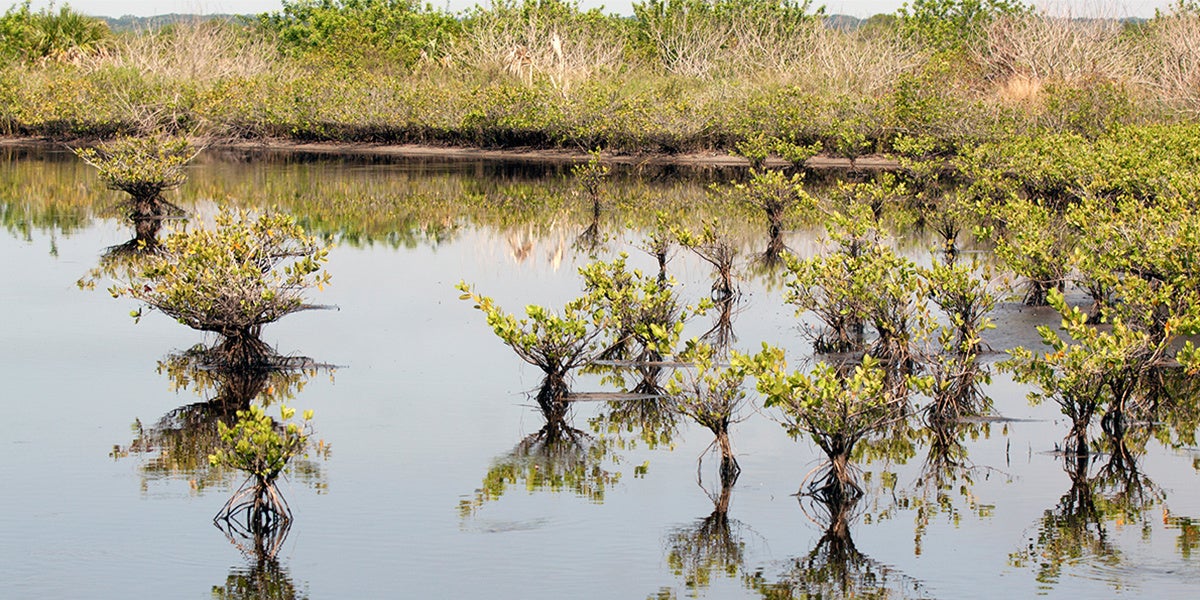 When it comes to climate change and sea level rise, the news has been generally bad for communities on the U.S. Southeast coast.

Florida is set to lose more than 10 percent of its homes by 2100, and five southern states have already lost $7.4 billion in home values.

But one study conducted by biologists at Villanova University offered some hope for the beleaguered region: warmer temperatures encourage the growth of mangroves, which have more complex roots than other wetland plants and can help build soil and protect coasts from storms like hurricanes.

“The study links the growth of individual plants, and particularly their roots, to the survival of an entire ecosystem. The long-term strength of the mangrove effects we identified may determine what the maps of our southeastern coastlines look like in the future,” study author and Villanova biologist J. Adam Langley said in a university press release.

The researchers exposed both salt marshes and mangroves to warming chambers and found that higher temperatures doubled the plants’ height and increased the transition from salt marsh to mangrove ecosystems.

Plots exposed to warming saw their mangrove cover increase by a factor of six compared with plots left at current temperatures.

Further, the mangroves’ elevation increased when exposed to temperatures consistent with projections for future warming, indicating that trees would be able to build soil to keep pace with a rise in sea level.

The expansion of mangroves at KSC could have immediate practical benefits, since National Aeronautics and Space Administration (NASA), which provided funding for the study, relies on wetlands and sand dunes to protect its $5.6 billion worth of infrastructure at the center.

However, as warming temperatures expand the range of mangroves, the study’s implications could move beyond the Southeast.

“This mangrove effect could benefit coastal wetlands around the world,” Langley said.

It also indicates that some changes caused by climate change could help combat others, if we conserve the ecosystems where those beneficial changes occur.

“Our study provides some evidence that the ongoing reshuffling of species on earth’s surface could allow for some adaptation to the same global changes that are causing them,” Villanova biologist Samantha K. Chapman said. “Conserving and restoring our coastal wetlands can help humans adapt to climate change.”