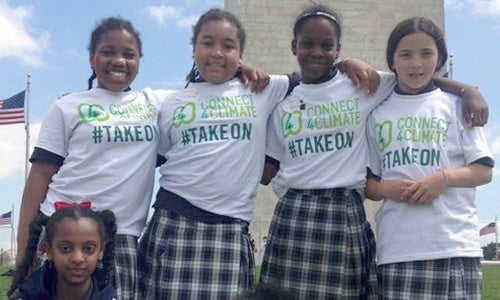 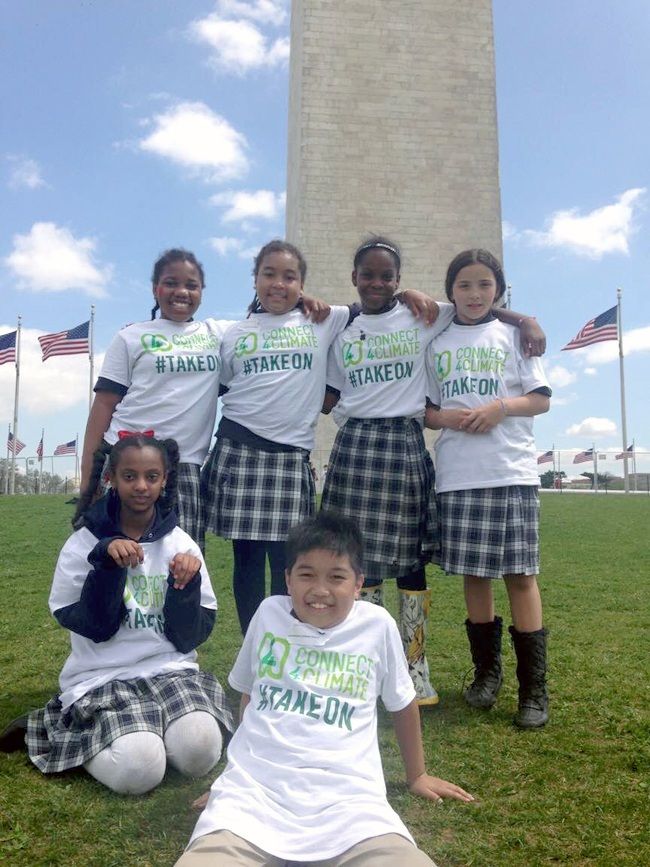 “What if you stop eating cheese? Will that help the planet?,” asked one girl from Annunciation Catholic School, one of the many school groups from the Washington, DC area that visited the pavilion today.

“The decisions you make about the food you eat have an impact the planet,” said Max Boykoff, professor at the Center for Science and Technology Policy at the University of Colorado, Boulder, and Connect4Climate advisor. “What kinds of foods contribute to the warming of the planet?,” he challenged. “Meat!” Correct.

The ideas kept coming—and we posted them to our #TakeOn board.

Recycling was a tough issue for one of the schoolgirls. “I try to get my family to recycle, but they don’t listen to me,” says Betel, 10. They use the first trashcan they see. But I’m working on them.”

Other kids declared they would create less trash in general—and pledged not to litter. They pledged to ride their bikes more rather than ask their parents for rides in the car. They also said they’d walk.

“Use solar panels, instead of gas,” said Malyk, 13, from Sacred Heart Bilingual Academy. Malyk was thrilled to learn that the whole pavilion he was standing in was powered entirely by solar panels. “Wow! Really?,” he said as he went to inspect the panel farm. 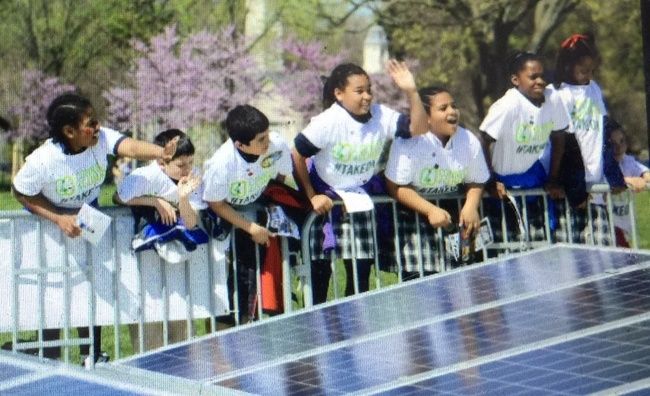 With young minds aligned in such a way, the future is looking up.

Tomorrow there are more festivities. We’ll hear more commitments as industry leaders, heads of business, movie stars and rock stars take the stage in the big festivities on Global Citizen 2015 Earth Day. We’re particularly excited to welcome ambassador to the United Nations Environment Program Don Cheadle (and fantastic actor of Hotel Rwanda), who will be announcing the winners of the Action4Climate competition that attracted more than 230 filmmakers from 70 countries who told their own climate stories in a stunning array of creativity and variety.

Cheadle will also be introducing Monica Ord, the producer and visionary behind the film Chloe & Theo, which we premiered just two nights ago.

Tomorrow also features a free concert on the Washington Monument Grounds with No Doubt, Usher, Fall Out Boy, Mary J Blige, Train and My Monring Jacket.

If you can’t make it to Washington, D.C. this weekend, you can follow all the activities with #TakeOn.