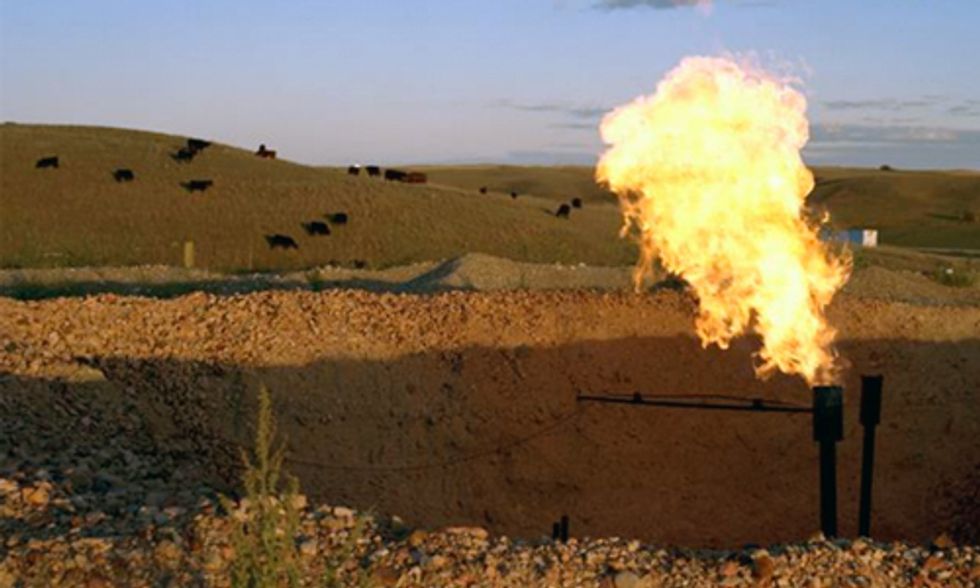 Earthworks, a nonprofit which works to protect communities from the impacts of mineral and fossil fuel extraction and promote sustainable energy development, has released a new report showing that the flaring of natural gas waste in just two shale plays, or exploration areas, is the equivalent of an additional 1.5 million cars on the road. The flares occur when natural gas is burned rather than captured.

The report, "Up in Flames: U.S. Shale Oil Boom Comes at Expense of Wasted Natural Gas, Increased Carbon Dioxide," accompanied by an interactive map by SkyTruth, a group that provides aerial evidence of environmental impacts. This map allows people to track flaring activity in the U.S. and around the world based on nightly infrared data collected by a National Oceanic and Atmospheric Administration (NOAA) satellite.

This new tool makes the scale and frequency of flaring more comprehensible and less abstract. Hopefully, enabling everyone to see where, when, and how often operators are flaring will create public pressure on government and industry to reduce the waste of this hard-won natural resource.

The report specifically looks at waste created in the North Dakota Bakken and Texas Eagle Ford development areas and how lax regulations and oversight enable this waste, a byproduct of fracking.

Among the study's findings:

130 billion cubic feet of natural gas burned in the Bakken and Eagle Ford Shale has produced the equivalent of 1.5 million cars’ emissions of carbon dioxide.

$854 million in natural gas has been burned as waste in the Bakken shale play since 2010.

North Dakota neither tracks how much companies pay in taxes on flared gas, nor independently tracks the volume of flared gas.

Texas does not require producers to pay taxes on flared gas.

Burning natural gas as waste is costing taxpayers and the climate. States should enact tough new standards to prevent flaring, including requiring drillers to pay taxpayers the full value of any gas they flare.

Environmental watchdogs in North Dakota and Texas commented on the study's findings.

“This report shows that North Dakota regulators simply aren’t doing their job," said Don Morrison, executive director of nonprofit grassroots group Dakota Resource Council. “Instead they’re putting private profits ahead of the public interest. This isn’t our first oil boom, we know how to do it better.”

But Earthworks sees the wasteful burning of drilling byproducts as one part of the larger problem of fossil fuel exploration and extraction.

Flaring is just one of many problems associated with unconventional oil and gas development. Unfortunately, North Dakota and Texas’s inadequate oversight of flaring is representative of state oversight of fracking across the country. The ultimate solution to these problems is to transition away from fossil fuels entirely and towards renewables like wind and solar.