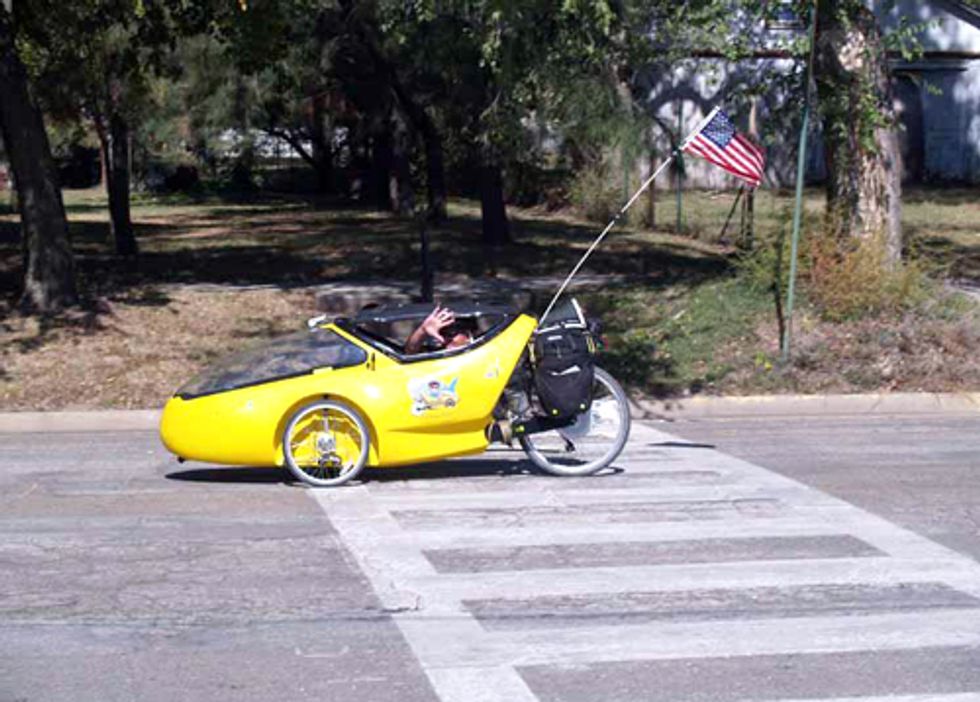 Renewable Rider Tom Weis and Ron Seifert discover what appears to be the Oklahoma tie-in for the Keystone XL pipeline in Cushing, Okla. The location matches descriptions provided by locals; surveyors are working on the property; and sections of pipe are assembled on the ground. Describing the day as "soul crushing" and the area as an industrial "dead zone," with an "overwhelming" stench of gas in the area in some parts, Ron imagines how different it would feel to be standing next to a wind farm or field of solar arrays.

Renewable Rider Tom Weis and Ron Seifert race a snowstorm towards Coalgate, Okla., with more than 100 miles behind them on the day. Reflecting on the clownish behavior of U.S. Senator James Inhofe (R-OK), Tom wonders aloud whether Inhofe is truly in denial over the climate crisis, or if he's simply a tool of the fossil fool/fuel industry. The latter would suggest he cares more about staying in office than protecting the future of his children and grandchildren, something that could actually be said about most members of Congress. Time for an Occupy Congress movement?

Renewable Rider Tom Weis asks Ron Seifert to remove the lid from a box discovered on the counter of Beverly's Country Kitchen in Jacksonville, Texas. Inside is the world's smallest 3-piece chicken dinner.

Video Entry #54: Why Is Rick Perry Letting a Foreign Corporation Mess With Texas?

Renewable Rider Tom Weis and Ron Seifert pedal through chilly north Texas after meeting with an "old school" reporter at The Paris News. For the first time in four days, the sun is out. Tom poses a pointed question to Texas Gov. Rick Perry: "For someone who prides yourself on law and order, why are you letting a foreign corporation mess with Texas?"

Video Entry #55: Texas Business Owner: "It's Our Country and It's Time We Take It Back."

Renewable Rider Tom Weis speaks with Amy Fikes, co-owner of Phoenix Rising, a women-owned local business devoted to all natural products in Sulphur Springs, Texas. Amy says she is "definitely against the pipeline" and discusses the "wonderful, great solutions" our nation has available to us: wind, solar, algae for fuel. She praises the success of local activists in shutting down local coal mines and coal burning by energy giant, Luminant.

Renewable Rider Tom Weis hears 92-year old Furman Boles explain why he is giving everything he can of himself to fight Keystone XL: "I believe it is the right thing to do." Furman calls the pipeline proposal "un-American," saying TransCanada has "lied all the way." Describing the act of protecting "God's green earth" as "patriotic," he says of TransCanada, "They don't have any business over here stomping on our ground and cutting our trees down." He says he loves "everything that has life in it" and is "for the environment" and "against abuses of eminent domain." Expressing concern for "critters" and "young folks," he explains, "All my life, I've been living it up. I've only got a limited time now to try to live it down." Furman poignantly describes how he plans to build his own coffin so he can "go green in the grave," but makes it clear he's not ready to go yet: "I got a lot of work to do."

Renewable Rider Tom Weis and Ron Seifert get a walking tour of David Daniel's wooded homestead in Winnsboro, Texas. The property he and his wife fell in love with, and dream of passing on to their 4-year old daughter, would be split in half by TransCanada's toxic tar sands pipeline. Four fresh water springs fall within the construction zone. David describes the moment he found the first survey stake on his property: "My heart just dropped." He shares a story of approaching five "jittery" TransCanada surveyors who had been illegally trespassing on his property and "took off running." He describes meeting with people sickened by toxins from Michigan's Kalamazoo River tar sands oil spill, saying TransCanada, which doesn't have an emergency response plan, is treating his family like a "lab rat." He talks about how company representatives regularly engage in "bold faced lying" and the toll the 3 ½ year fight has taken on their lives: "The disrespect for our lives, and the lives of our daughter and the resources is just unacceptable." David, his family, and everyone else living up and down the pipeline route need the American people to come to their defense.