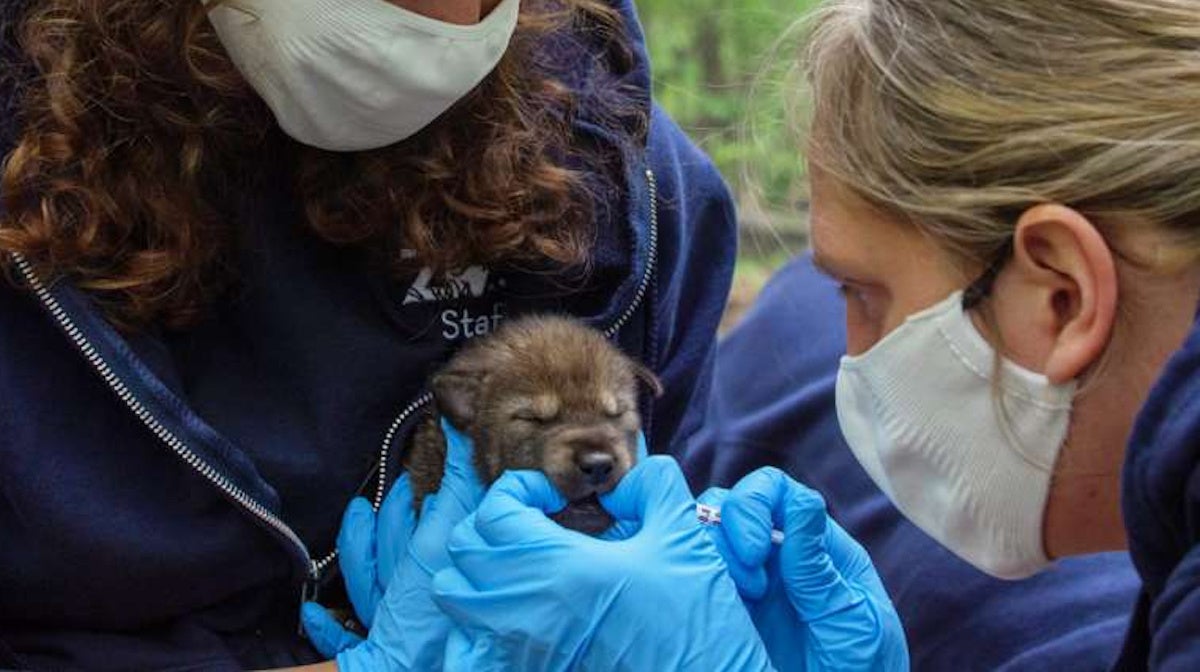 The population of the most endangered canid in the world just got a little bit bigger.

The North Carolina Zoo announced the birth of five American red wolf pups on Friday. This is an especially big deal because there are only 15 to 20 red wolves left in the wild, in eastern North Carolina.

“Congratulations to the North Carolina Zoo for playing an essential part toward helping this critically endangered species recover,” North Carolina Department of Natural and Cultural Resources secretary Susi H. Hamilton said in the birth announcement. “It’s yet another example of the Zoo doing amazing work to conserve wildlife and wild places.”

We're thrilled to announce the birth of 5 American red wolves as part of our red wolf breeding program! Born April 21st, the pups & their mother are all healthy & doing well.

With only 15-20 red wolves in the wild, only in NC, they're the most endangered canid in the world. pic.twitter.com/SoUqRj47LV

The pups were born April 21 to a mother named Piglet and a father named Jewell. This is the couple’s first litter.

“The pups and their mother are all healthy and doing well,” the zoo said.

The new babies were all named for plants found in North Carolina, the zoo explained:

The names for the males are Oak (Appalachian Oak), Cedar (Red Cedar) and Sage (Azure Sage). The females are named Lily (Carolina Lily, the state’s wildflower) and Aster (Piedmont Aster).

American red wolves have struggled in the wild in recent years, as The Herald-Sun reported. They were declared extinct in the wild in 1980 due to hunting and habitat loss, but the U.S. Fish and Wildlife Service (FWS) began efforts to reintroduce them to the Alligator River National Wildlife Refuge as part of the American Red Wolf Recovery Program. Their numbers swelled to more than 130 by 2006, but then began to decline between 2013 and 2015 after FWS introduced a policy allowing landowners to shoot and kill wolves, as EcoWatch previously reported.

In 2018, a federal judge ruled that the killing violated the endangered species act and had to stop.

In zoos, however, the species has fared better. There are around 240 red wolves in breeding programs across the U.S., the zoo said.

The North Carolina Zoo has been part of the American Red Wolf Recovery Program since 1994 and has bred 34 wolves since the program started. The birth of the new pups brings the zoo’s wolf population up to 25, meaning it has the second-biggest red wolf pack in U.S. after the Point Defiance Zoo and Aquarium in Tacoma, Washington.

Six red wolf babies were also born at the The Museum of Life and Science in Durham, North Carolina in April 2019, The Herald-Sun reported. However, most of the museum’s red wolves were moved to Virginia in January, and no babies were born there this spring, WRAL reported.

The North Carolina Zoo is currently closed to visitors because of the coronavirus pandemic, though you can still visit virtually. However, the new arrivals won’t know the difference right now.

“The pups are being kept in a quiet, non-public viewing area of the Zoo and have minimal contact with staff and keepers,” the zoo said. “This allows their mother to raise the pups with the least amount of stress in a natural habitat.”