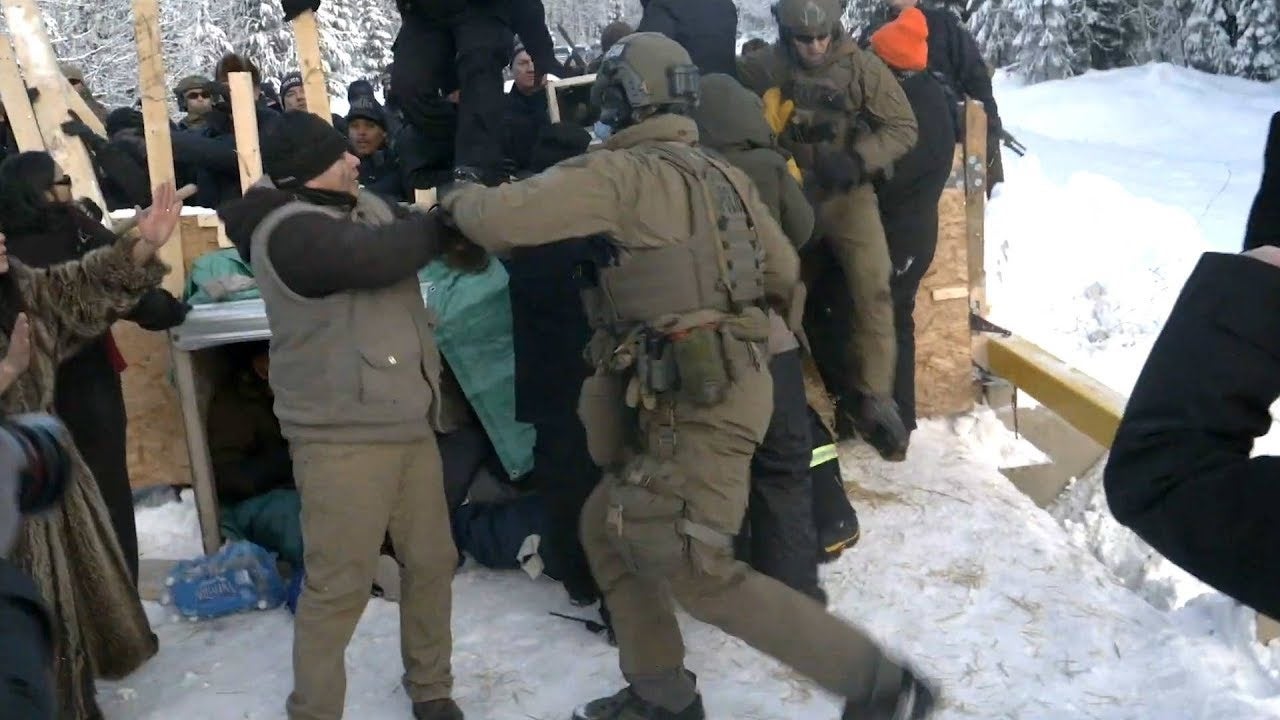 Canadian police discussed shooting indigenous protesters who were trying to stop a natural gas pipeline from being built on their land, documents reported by The Guardian Friday revealed.

On Jan. 7, Royal Canadian Mounted Police (RCMP) armed with assault rifles arrested 14 land defenders when they cleared a checkpoint set up by the Wet’suwet’en nation to stop construction of the Coastal GasLink (CGL) pipeline on their unceded territory in northern British Columbia (B.C.). Now, the documents obtained by The Guardian show that, in a strategy session before the raid to clear the road, RCMP argued that “lethal overwatch is req’d,” meaning they wanted to use snipers.

RCMP higher-ups also told their officers to “use as much violence toward the gate as you want.” Police were ready to arrest both children and grandparents, and one document mentioned the possibility of sending children to social services. Historically, the RCMP forcibly removed indigenous children from their homes to place them in residential schools.

“Here we are, nearly 2020 and we are still being threatened with violence, death, and the removal of our children for simply existing on our lands and following our laws,” Sleydo’, or Molly Wickham, a spokesperson for the Gidimt’en Checkpoint protesters who was arrested herself in January, said in a statement reported by The Georgia Straight.

Nothing has changed in 150 years! They are willing to kill us for our lands and steal our children. We will never give us @JustinTrudeau @jjhorgan https://t.co/494YjHI0do

Coastal GasLink is owned by TC Energy, the company formerly known as TransCanada Pipelines, which is also the driving force behind the Keystone XL pipeline opposed by indigenous groups in both the U.S. and Canada. CGL is set to run 670 kilometers (approximately 416 miles) from northeastern B.C. to a liquid natural gas facility in Kitimat that is yet to be constructed.

The company gained permission from elected First Nation councils along the pipeline route, but the hereditary Wet’suwet’en leaders oppose pipeline construction on their land. Since the Wet’suwet’en never surrendered their territories to the Canadian government, they argue that their hereditary leaders should have final say.

“This project aims to blaze a trail, in what has been envisioned as an energy corridor through some of the only pristine areas left in this entire region,” a Wet’suwet’en media statement explained. “If CGL were to be built and become operational, it would irreversibly transform the ecology and character of Northern B.C. This is why the Wet’suwet’en Hereditary Chiefs have all unanimously opposed the construction of ALL pipelines through their territory.”

The Wet’suwet’en first established a camp called Unist’ot’en in 2009 to fight pipelines in their territory, The Guardian explained. It was the first in a growing movement of indigenous encampments protesting fossil fuel infrastructure in North America. The indigenous nation is now waiting for a provincial supreme court to decide on an injunction sought by TC Energy that would ban indigenous protesters from blocking access to any pipeline construction sites.

The RCMP documents obtained by The Guardian led Canadian officials to voice concerns over the role the police play in clashes between fossil fuel companies and indigenous land defenders.

“There are a number of very deeply concerning words, phrases and terms used to a situation that is immensely delicate,” Indigenous Services Minister Marc Miller said Friday, as CBC News reported. “This is something that we need to revise as a government and take a look at that, because the terminology is entirely unacceptable.”

In another document reviewed by The Guardian, the police also said they needed to arrest demonstrators for the goal of “sterilizing the site.”

RCMP Sgt. Janelle Shoihet said in a statement reported by CBC News that the police had been denied a request to review the documents, but said some of the phrases may have been taken out of context. The term “lethal overwatch,” in particular, does not necessarily mean that police snipers would be deployed to shoot at protesters. They are often deployed to ensure public safety during parades and demonstrations.

“Police officers who occupy the position of lethal overwatch are tasked with observing, while other police officers are engaged in other duties which occupy attention,” Shoihet said.

But indigenous leaders and their supporters questioned who the police, who cleared the site on the strength of a B.C. Supreme Court injunction obtained by TC Energy, are ultimately protecting. The protesters’ lawyer Martin Peters said the police had acted as “security guards” for the company.

“I was shocked,” Wet’suwet’an hereditary chief Hagwilnegh, also called Ron Mitchell, told CBC News. “[The RCMP] assured us that they were there to protect everyone, including us. That was the message we received from them. The question that comes to mind is, who are the RCMP working for? They weren’t nice to our people, especially the elders.”