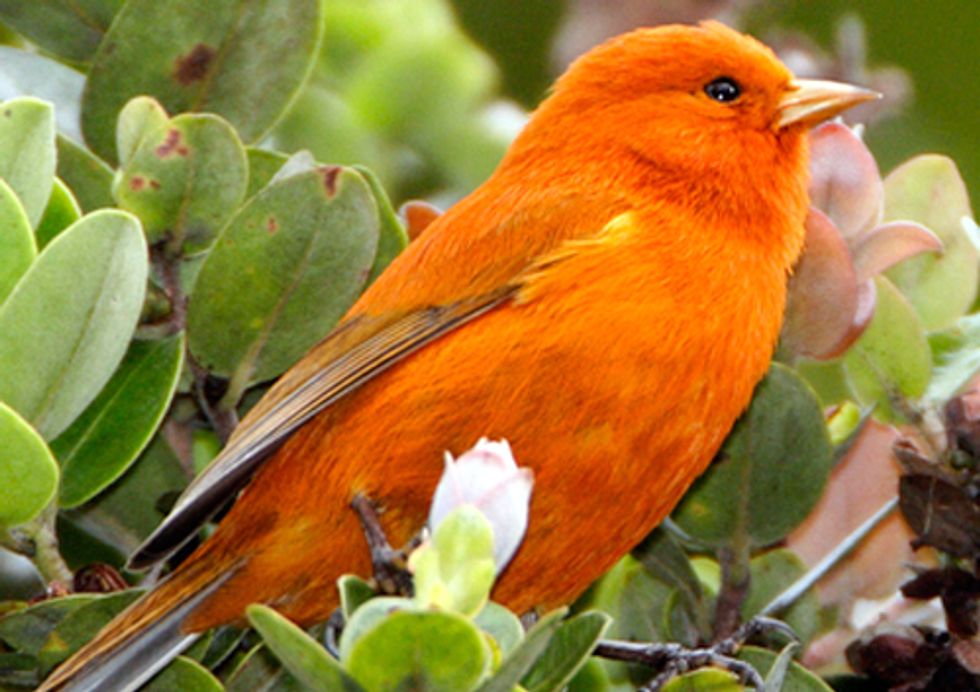 Three of Hawai‘i Island's rarest forest birds have been detected at lower elevations for the first time in 30 years, a finding that suggests the birds may be developing immunity to mosquito-borne diseases that have severely impacted their populations.

Scientists from the U.S. Geological Survey’s (USGS) Pacific Island Ecosystems Research Center and the U.S. Fish and Wildlife Service’s (FWS) Hakalau Forest National Wildlife Refuge studying the potential impact of climate change on avian disease, identified the endangered Hawai‘i Creeper, Hawai‘i ‘Ākepa and ‘Akiapōlā‘au at 4,200 feet elevation, significantly lower than they had been found on the refuge for several decades.

These findings are potentially very significant because all three endangered honeycreepers are believed to be highly susceptible to avian malaria and avian pox—both mosquito-transmitted diseases. As a result, their ranges had been restricted to the cooler, mosquito-free, higher elevations of the refuge.

"Detecting these endangered forest bird species is encouraging because of the serious challenges these birds face, including the expansion of disease due to global climate change, competition with introduced non-native birds, introduced predators and habitat destruction from feral ungulates," said FWS Wildlife Biologist Steve Kendall. "These endangered species were not detected when USGS biologists last visited this remote location."

"Hawai‘i's native birds face multiple threats from habitat destruction, invasive species, introduced diseases and climate change, with many already having been driven to extinction," said USGS Director Marcia McNutt. "The observation of three endangered species possibly expanding their range in a wildlife refuge gives us hope that, with some care, the road to extinction need not be a one-way street."

“Although the underlying cause for these birds’ detections in lower elevation habitat is uncertain at this time, we are hopeful that after decades of avian mortality and extinctions from mosquito-borne diseases, these three highly endangered species have begun to develop some level of resistance,” said Dr. Chris Farmer, science coordinator for reintroduction of Hawaiian birds at American Bird Conservancy, one of the leading bird conservation groups working on Hawaiian bird conservation efforts.

“A single bite from a disease-carrying mosquito can be fatal to some Hawaiian honeycreepers,” Farmer, who was not involved in this research project, added.

Extensive surveys of forest habitats on Hawai‘i Island in the late 1970s and early 1980s showed that the best remaining habitats and largest native bird populations were in the high-elevation rainforests on the eastern slopes of Mauna Kea. This led to the establishment of Hakalau Forest National Wildlife Refuge in 1985 to protect and manage endangered forest birds and their habitats. Hakalau Forest is the only national wildlife refuge dedicated to conservation and restoration of Hawaiian forest birds.

Due to active habitat management and restoration, Hakalau Forest is one of few places on Hawai‘i Island where populations of native forest birds are increasing or at least stable. Ongoing studies at the refuge by USGS and FWS scientists on avian disease, forest bird demographics and food resources, and control of feral pigs may shed some light on whether these endangered forest birds are holding their own or recovering at lower elevations.

In the last century, no place else on Earth has witnessed the levels of bird extinctions experienced by Hawai'i. Since the arrival of Europeans to the Hawaiian Islands, 71 out of a total of 113 endemic bird species have gone extinct. Of the remaining 42, 32 are federally listed under the U.S. Endangered Species Act, and ten of those have not been seen for up to 40 years.