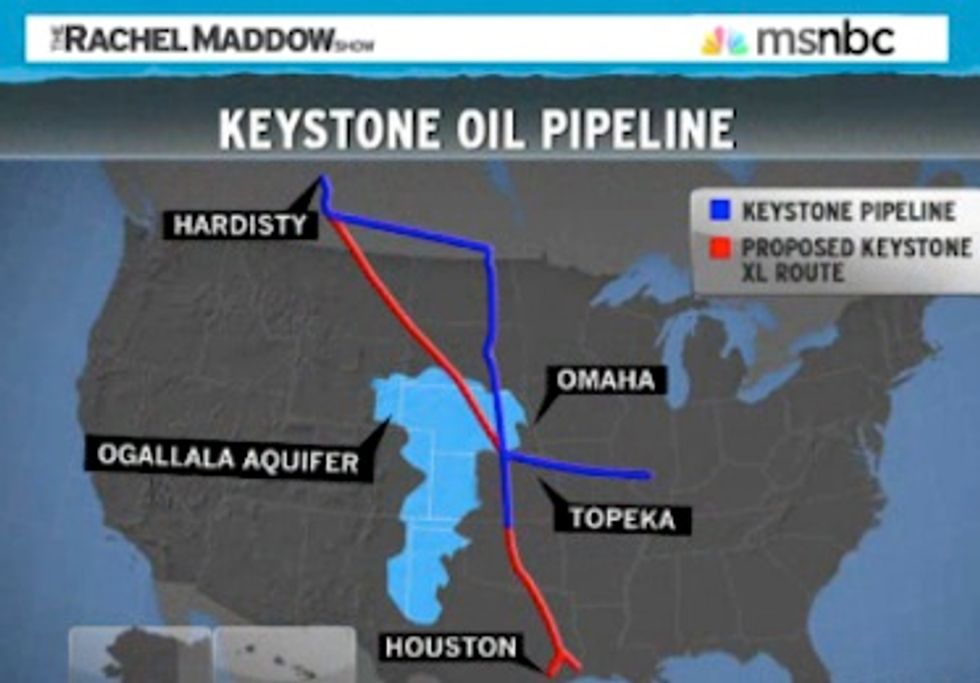 The Rachel Maddow Show devoted a portion of its program on Friday to exposing climate change deniers and highlighting Keystone XL pipeline opposition. Maddow points to the success opponents have had attaching a serious political cost to the approval of the pipeline.

The ad, which Maddow endorses—saying climate science denialism is "something you should be embarrassed about and something you should pay a political price for"—identifies these congressmen as skeptics and exposes the special interest campaign endorsements these politicians receive from the oil and gas industry.

Later in the show, Maddow talks to Chris Hayes, host of MSNBC's All In, about the State Department's delay in investigating a conflict of interest by a consulting firm that reviewed the proposed Keystone XL pipeline. Hayes and Maddow discuss the influence of the grassroots movement that shed light on the controversy, and this fortuitous victory for Keystone XL opponents.

Friends of the Earth first revealed last month that the consulting group, Environmental Resources Management lied on its disclosure form when asked if they had any ties with an interest in the pipeline's completion. In actuality, Environmental Resources Mangement has not only worked for the company that is building the Keystone XL pipeline, TransCanada, but for ExxonMobil, Shell, Chevron and other oil companies that would profit from its construction.

Friends of the Earth calls the investigation another nail in the project's coffin, stressing that President Obama already has more than enough evidence to kill it outright.

"President Obama doesn't need to wait for the results of the investigation into Environmental Resources Management," said Ross Hammond, senior campaigner with Friends of the Earth. "He has all the evidence he needs to deny the permit right now."