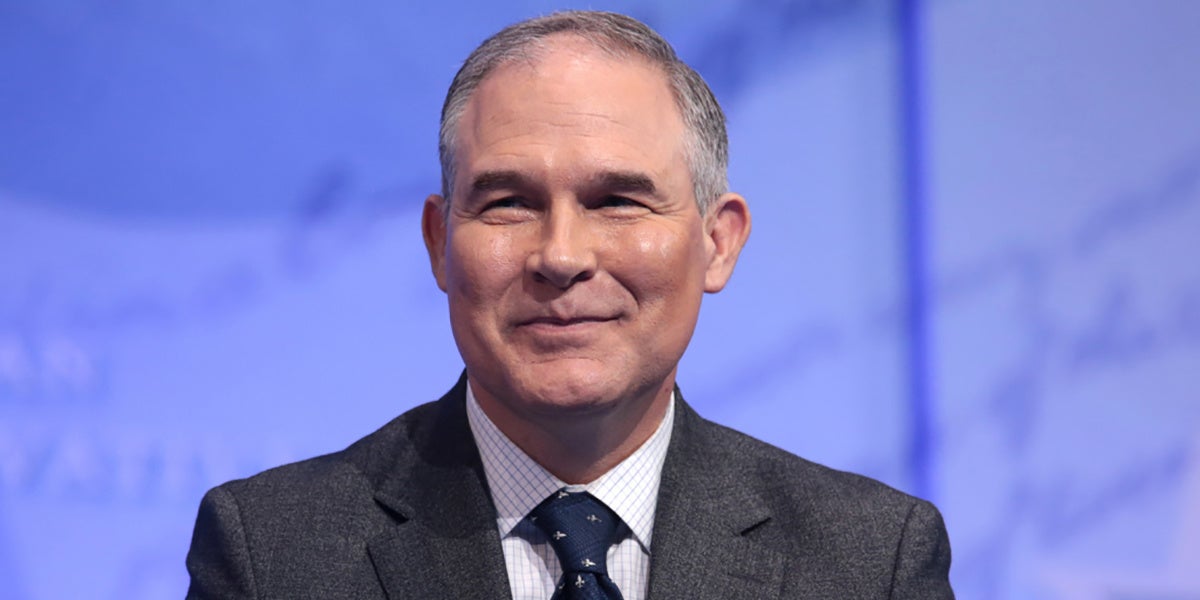 Vanity Fair reported on Wednesday that President Trump was thinking of firing Attorney General Jeff Sessions and replacing him with Pruitt.

Then, on Saturday, The New York Times ran an article outlining Pruitt’s long-term political ambitions, leading up to a presidential run as early as 2024.

Trump was considering tapping Pruitt for the Attorney General role because he hoped that Pruitt would not have to recuse himself from the ongoing investigation into Russian meddling in the 2016 presidential election, and might even fire the man currently running it, Special Counsel Robert Mueller, Politico reported Thursday.

According to The Times, Pruitt had been vocal about his willingness to step into the role.

However, Politico pointed out that replacing Sessions with Pruitt might not be a wise move on Trump’s part. If he did decide to do so, he would be taking advantage of the Vacancies Reform Act (VRA), which allows the president to replace an attorney general who has died, retired, or left the position for other reasons, as long as the replacement is a member of the executive branch who was confirmed by the Senate for their current post. However, it is unclear whether or not the VRA can be used in the case of a firing, and, if Trump appointed Pruitt and the courts later ruled his tenure illegitimate, any decisions he made as acting attorney general would be overturned.

Further, Pruitt-as-attorney-general might end up having to recuse himself from the Mueller investigation after all given his close political ties to Trump, Politico reported.

White House Chief of Staff John F. Kelly, who shot down Pruitt’s idea for a public climate change debate, also reportedly put a damper on his Department of Justice ambitions. Kelly called Pruitt Wednesday night and told him that the president was pleased with his work as EPA chief and that he shouldn’t concern himself with the attorney general position, The Washington Post reported.

Still, Kelly’s may not be the final world. The same Post article repeated rumors that Kelly’s job might also be in danger, though other sources say his position is secure.

But no matter how Pruitt fares in the immediate Trump administration shake-up, he still holds longer-term ambitions.

The Times reported that Pruitt might run for office in his home state of Oklahoma as a stepping stone to the presidency. He could step in to this year’s governor’s race or run for Senate in 2020 if the current Republican James Inhofe retires.

Pruitt’s aggressive push to repeal or halt Obama-era environmental regulations—such as the Clean Power Plan curbing coal-power-plant emissions or the Clean Water Rule protecting rivers, lakes, wetlands and streams from pollution—might be a sign of his political ambitions.

The EPA chief under George H. W. Bush, William K. Reilly, told The Times that the agency’s leaders don’t normally go on to high-profile political careers, since even the Republican appointees tend to make enemies as they enforce environmental policies.

“The mission he is on is not one that his predecessors at the EPA have recognized. And it could be a good strategy to win the constituency that elected the president,” Reilly told The Times.

Pruitt’s deregulatory efforts might actually do more short-term good for his political career than they will do lasting harm to the environment. Christine Todd Whitman, who also led the EPA head under a Republican administration when she was appointed by George W. Bush, said that he is announcing these efforts too quickly ensure they won’t be overturned in the courts later.

“They’re getting rushed out. I don’t think the homework is getting done. It makes for good sound bites, but they might not stand up legally,” Whitman told The Times.

But even if they were overturned, Whitman didn’t think Pruitt would necessarily pay with his base. “Pruitt could be gone from the EPA by the time that happens,” Whitman continued.