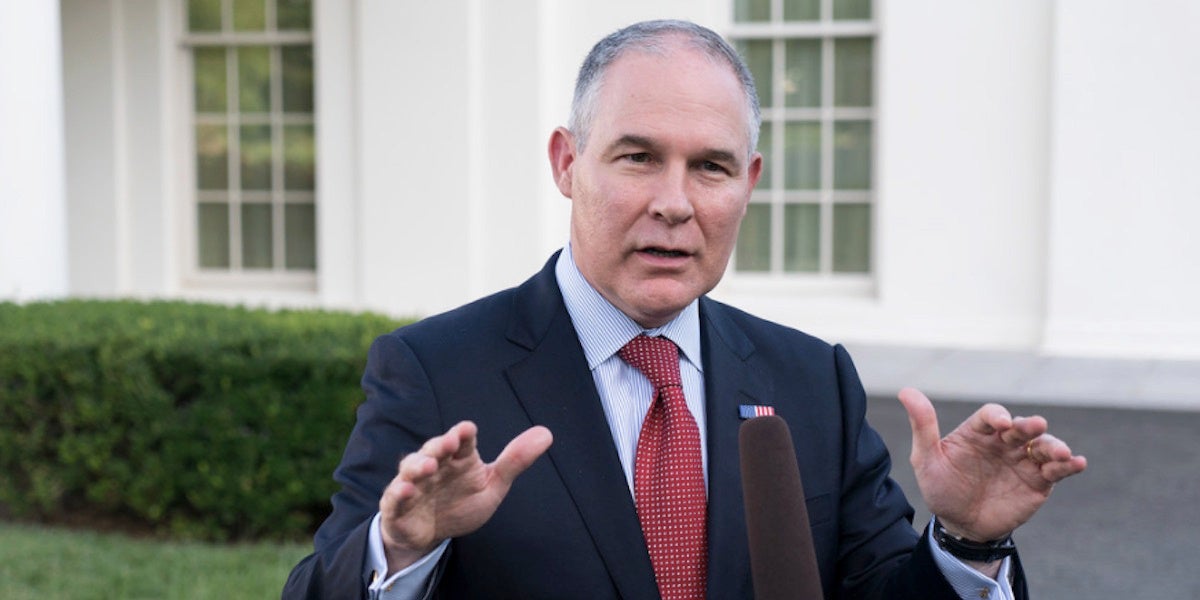 Environmental Protection Agency (EPA) Administrator Scott Pruitt said at an event in Kentucky he will sign a proposed rule on Tuesday “to withdraw the so-called clean power plan of the past administration.”

The Clean Power Plan, which focused on cutting emissions from coal-burning power plants, was a major target of the current administration’s regulatory rollbacks. In March, President Trump signed the Executive Order on Energy Independence that called for a review of the CPP, which he considers a “war on coal.”

And in June, Trump infamously announced plans to withdraw the U.S. from the Paris climate agreement, a global action plan to limit temperature rise to well below 2°C to avoid dangerous climate change. Without the CPP, the U.S. will not live up to its pledge made in Paris.

Pruitt, as Oklahoma’s attorney general, made a career fighting EPA safeguards and was part of a coalition of state attorneys general that sued the Obama administration to block the implementation of the CPP. The Supreme Court has since put the regulation on hold until the legal challenge is completed.

“The EPA and no federal agency should ever use its authority to say to you we are going to declare war on any sector of our economy,” Pruitt said Monday.

.@EPAScottPruitt: "Tomorrow, I'll be a signing a proposed rule to withdraw the so-called Clean Power Plan of the past administration." pic.twitter.com/6hjvfkoX5d

According to the Associated Press, the EPA plans to declare that the Obama policy overstepped federal law by setting emissions standards that power plants could not reasonably meet.

“That rule really was about picking winners and losers,” Pruitt also said during his remarks. “The past administration was unapologetic, they were using every bit of power, authority to use the EPA to pick winners and losers on how we pick electricity in this country. That is wrong.”

Vera Pardee, senior counsel at the Center for Biological Diversity, criticized the announcement in a prepared statement to EcoWatch.

“Repealing the Clean Power Plan will sabotage EPA’s most important effort to fight pollution and protect us from climate change,” Pardee said. “Undoing the existing plan without any replacement would add years of doing absolutely nothing to reduce power plant emissions. If Scott Pruitt follows through with this repeal, his reckless disregard for EPA’s essential duties should cost him his job.”

POLITICO reported last week that the agency will now seek suggestions from the public on possible replacements for the CPP but “some conservative groups have pressed for Pruitt to simply erase Obama’s rule and offer no replacement at all.”