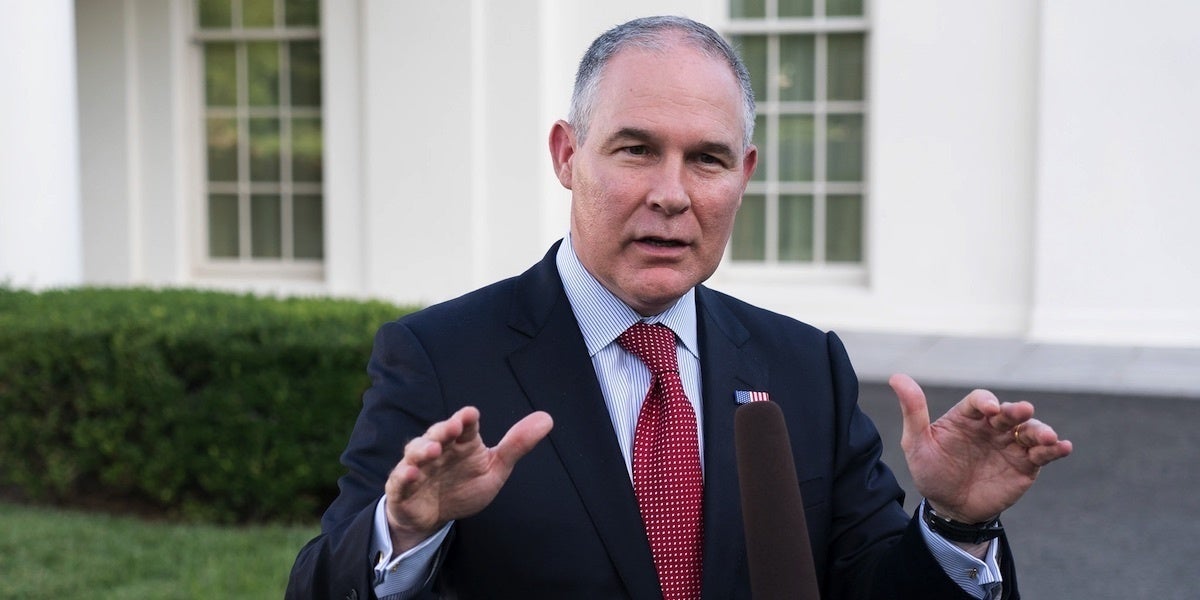 The U.S. Environmental Protection Agency (EPA) put a two-year suspension on the Clean Water Rule, an Obama-era policy defining which waters can be protected against pollution and destruction under federal law.

WOTUS was supposed to take effect in the coming weeks after the Supreme Court decided last month that cases regarding the matter should be heard by district courts. However, Pruitt’s action on Wednesday halted the rule from implementation.

“Today, EPA is taking action to reduce confusion and provide certainty to America’s farmers and ranchers,” Pruitt said. “The 2015 WOTUS rule developed by the Obama administration will not be applicable for the next two years, while we work through the process of providing long-term regulatory certainty across all 50 states about what waters are subject to federal regulation.”

The 2015 rule protected large water bodies like lakes and rivers but also listed smaller waterways such as streams, ponds and wetlands for federal protection.

The EPA boss is now crafting its own Trump administration version, which according to the New York Times, “is expected to include much looser regulatory requirements on how farmers, ranchers and real estate developers must safeguard the streams and tributaries that flow through their property and into larger bodies of water.”

The decision to withdraw and replace WOTUS was advocated by industry groups like the
American Farm Bureau Federation and the American Petroleum Institute, as well as Republican politicians and farmers, ranchers and real estate developers who viewed the rule as an infringement on property rights.

“The Obama administration’s outrageous Waters of the United States rule would have put backyard ponds, puddles, and farm fields under Washington’s control,” said Senator John Barrasso, the Wyoming Republican who is chairman of the Senate Environment and Public Works Committee. “Today’s action will give Wyoming’s ranchers, farmers, small businesses, and communities clarity.”

But environmental groups worry that the move will allow uncontrolled pollution and destruction of our nation’s rivers, streams, lakes and wetlands.

Scott Pruitt's @EPA has suspended a rule that could have protected nearly 60% of US stream miles from pollution, removing safeguards for streams & millions of acres of wetlands. #DefendWater and protect #wildlife: https://t.co/beSl1Mi4lY https://t.co/0F3Pl8zQKU

“Without the Clean Water Rule’s critical protections, innumerable small streams and wetlands that are essential for drinking water supplies, flood protection, and fish and wildlife habitat will be vulnerable to unregulated pollution, dredging and filling, said Bob Irvin, president of
American Rivers.

”Healthy rivers and streams are vital to our communities and economy, and the health of millions of Americans. President Trump and EPA Administrator Pruitt want to throw away carefully crafted safeguards that were based on strong economic arguments, sound science and broad public support,” Irvin said. “We won’t let that go unchallenged.”

He
tweeted that the Trump administration’s suspension of the Clean Water Rule was “reckless and illegal.”

“The Clean Water Rule is a common sense application of the law and the best science to protect our waters,” Schneiderman said. “The Trump Administration’s suspension of these vital protections is reckless and illegal. That is why I will lead a multi-state coalition that will sue to block this rollback in court.”

The Hill reported that the Natural Resources Defense Council has also pledged to sue. The Sierra Club and Earthjustice may also file suit.