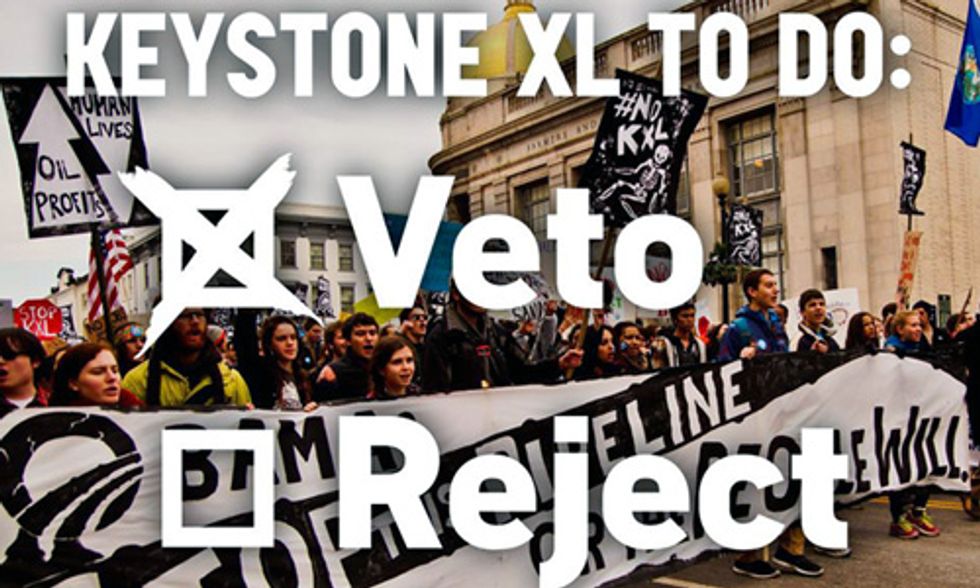 "Now, it’s time for the President to show he’s serious about his climate legacy by moving on to step two: rejecting this pipeline once and for all," said May Boeve, executive director of 350.org. Photo credit: 350.org

On Feb. 11, the U.S. House of Representatives passed the Senate’s version of the Keystone XL pipeline bill by a vote of 270-152, the Senate passed the bill on Jan. 29 by a vote of 62-36. Neither the House nor the Senate have enough votes to override the President's veto of this controversial project. The bill was an effort by Congress to override the State Department's environmental review of the pipeline, which would have given TransCanada the authority to build the 875-mile project.

"In vetoing the Keystone XL pipeline, President Obama is showing that he’s listened to the people, not the polluters," said Annie Leonard, executive director of Greenpeace USA. "Just this week we’ve seen corporate interests exposed for spending over a million dollars on the science of climate denial. Enough is enough. The State Department needs to put the final nail in the coffin of Keystone XL, so we can focus on the real opportunity ahead: building America’s new, clean energy economy."

“President Obama said he’d veto this attack on his executive authority, and he kept his word," said Michael Brune, executive director of the Sierra Club. "That’s what he said he’d do from the start, but Republicans in Congress continued to waste everyone’s time with a bill destined to go nowhere, just to satisfy the agenda of their big oil allies."

White House officials have previously indicated that the President would veto the bill on the grounds that the State Department is still conducting its review of whether the massive pipeline would serve the national interest. White House Press Secretary Josh Earnest said that Obama will veto the bill because it goes around the State Department review and "circumvents a longstanding administrative process for evaluating whether or not infrastructure projects like this are in the best interest of the country."

“President Obama just stood up with farmers, ranchers and Tribal Nations to protect our land and water," said Jane Kleeb of Bold Nebraska. "The President's veto comes at a time when Republicans will do anything Big Oil asks, even if it means putting our families at-risk of water pollution. We call upon the President to use that same courage and leadership by rejecting the KXL permit once and for all.”

The Keystone XL pipeline would transport roughly 800,000 barrels of heavy crude from Hardisty, Alberta, to refineries in Port Arthur, Texas. Opponents of the pipeline argue that the environmental risks are not worth the 35 permanent jobs that the pipeline would create. According to a blog post by Robert Redford, tar sands oil is the most carbon intensive fuel on the market. All told, the additional carbon pollution from this project would be as much as putting up to 5.7 million additional cars on the road, the State Department’s analysis found.

“This veto is conclusive proof that activism works," said May Boeve, executive director of 350.org. "After four years of rallies, marches, sit-ins, and civil disobedience, we’re thrilled to see President Obama take an important first step by vetoing this love letter to Big Oil. As the President himself has argued, Keystone XL would worsen climate change, threaten the safety of farmers and landowners in America’s heartland, and create essentially no long-term jobs—all so a Canadian oil company gets to ship dirty tar sands to the rest of the world. Now, it’s time for the President to show he’s serious about his climate legacy by moving on to step two: rejecting this pipeline once and for all.”