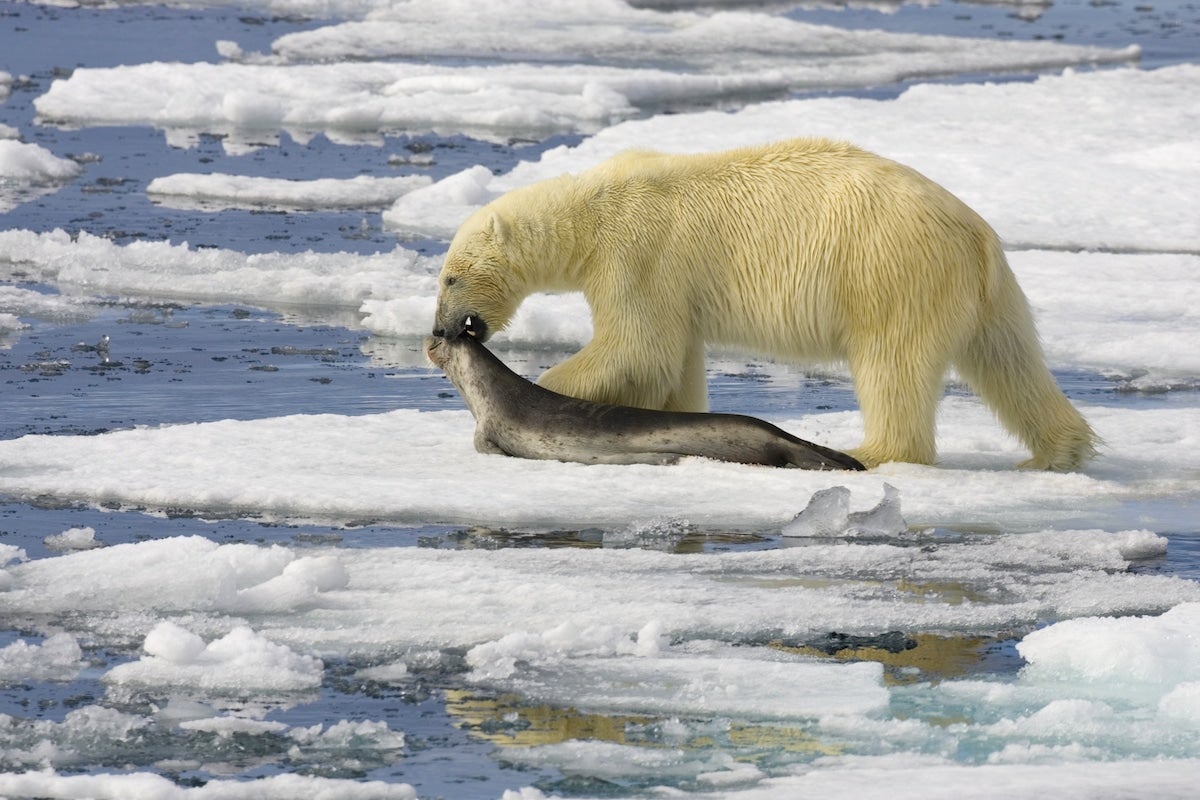 A polar bear feeds on a seal in Norway. Darrell Gulin / The Image Bank / Getty Images

Polar bears are not only the world’s largest bear, they’re also great swimmers and at the top of the food chain in the Arctic, according to the World Wildlife Fund. The ice-dwelling bear, whose Latin name (Ursus maritimus) means “sea bear,” spends much of its time in the ocean and more than 50 percent of its life hunting, mostly for the seals that make up most of its diet.

Because polar bears are the top predator in the Arctic and their diet is high in fat, particular contaminants are more likely to accumulate in their bodies.

“They’re like a trap for these chemicals,” said Frank Wania, a professor in the Department of Physical & Environmental Science at the University of Toronto Scarborough, who was one of the study’s authors. “Their contaminant intake is very high, but their ability to expel it is very low.”

The study, “Probing the Thermodynamics of Biomagnification in Zoo-Housed Polar Bears by Equilibrium Sampling of Dietary and Fecal Samples,” was published in the journal Environmental Science & Technology.

For the study, Wania and Ph.D. student Yuhao Chen came up with a new method to look at how polychlorinated biphenyls (PCBs) accumulate in the bodies of polar bears after eating contaminated food. In order to find out how many of the PCBs get trapped compared to how many are excreted, the scientists examined the diet and fecal samples of polar bears who live at the Toronto Zoo.

According to ScienceDirect, biomagnification is when the chemical concentration in an organism is greater than the concentration of its food when the main source of its exposure to the chemical is through its diet. As an apex predator, polar bears experience this, as the amount of toxic chemicals is greater the higher up you go in the food chain, the press release said.

Some chemical contaminants are harder to break down and thus more difficult to excrete than others due to their makeup, like certain PCBs, and thus build up in the body tissue of animals and humans. The researchers found that, due to the ability of the polar bears’ digestive system to absorb the fat from their diets, PCBs have a tendency to have a higher biomagnification rate in their systems.

Supervisor of nutrition science at the Toronto Zoo Sarra Gourlie, who provided the polar bear fecal samples, said that, since polar bears have the ability to absorb almost all the fat they consume, “They’re able to extract about 97 percent of fat from their diet, so very little of it actually gets excreted,” the press release stated.

Although they have been globally banned, PCBs have the ability to persist in the environment. The researchers said that, though they only examined the accumulation of PCBs in the study, the study’s method could help with keeping track of other harmful chemicals that build up through biomagnification.

Elevated PCB levels have been linked to reduced testosterone levels and interference with the immune and endocrine systems of polar bears in the wild.

“The levels of PCBs have been found to exceed levels of concern to the point where they are expected to have a negative impact on polar bears living in the wild,” Wania said in the press release.

Since tissue analysis has traditionally been used in the study of biomagnification, hardly any biomagnification research has been done on endangered top predators or humans, and the research team hopes their method will be able to be employed with additional apex predators like tigers and lions in the wild.

The possible analysis of food and fecal specimens from humans in order to study the biomagnification of contaminants in the body is being looked into by Chen.