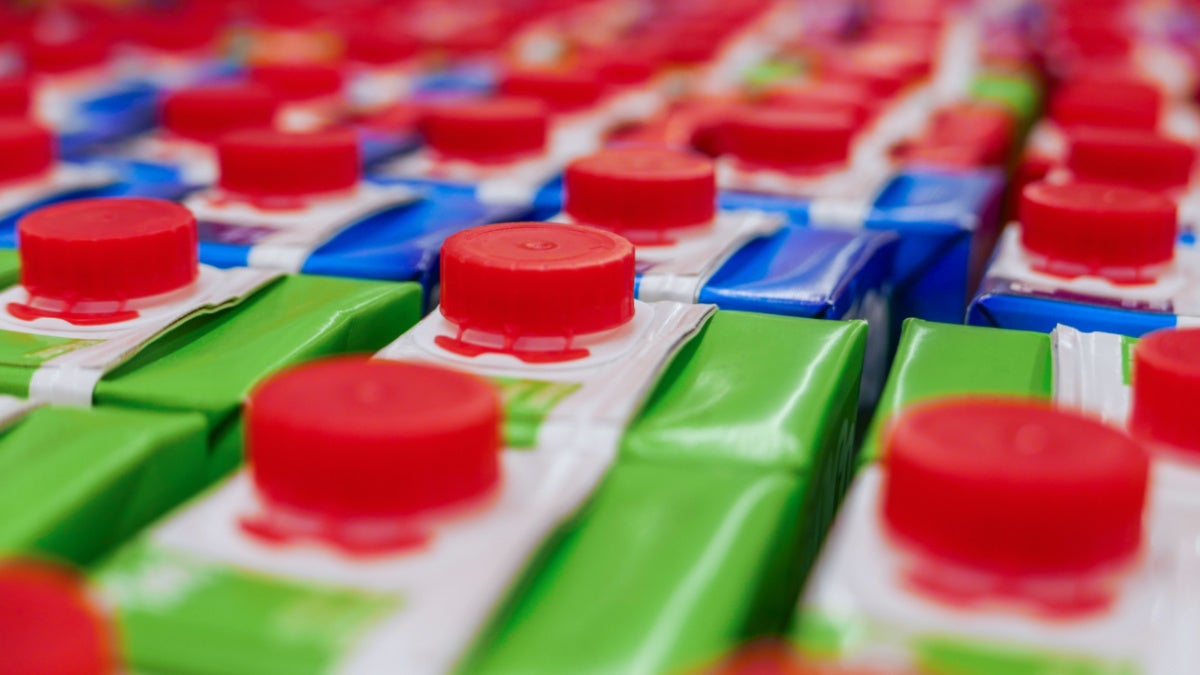 Only the paper part of a drink carton would be recycled — everything else, including the plastic coating or layer or aluminum foil, would be incinerated as residual waste. tavan amonratanasareegul / Getty Images

When it comes to recycling and recyclability, very little, it seems is straightforward — even something as seemingly simple as orange juice can present a conundrum. In Germany, many smaller shops sell drinks in cartons or plastic bottles, both of which will end up in the yellow recycling bin. But how do their recycling credentials stack up?

“As far as recyclability is concerned, the plastic bottle is probably slightly better because it is likely only made from one plastic, and so is easier to recycle than a multilayer material like a beverage carton,” says Rolf Buschmann, waste and resource expert with the German environmental organization BUND, who worked on the group’s 2019 Plastic Atlas.

He explains that only the paper part of the drink carton would be recycled — everything else, including the plastic coating or layer or aluminum foil, would be incinerated as residual waste.

How easy is it to recognize multilayer packaging? With drink cartons, it’s usually obvious that they’re made from a combination of different materials, but with other products, such as candy wrappers, it’s a different story.

Such packaging can be made from a complex mix of up to 10 different films of plastic, which as Joachim Christiani, managing director of German recycling institute cyclos-HTP, explains, is invisible to consumers.

“In recent years there’s been a trend toward so-called multilayer packaging, which is extremely light and thin. It saves material as well as CO2 emissions during transport, but can’t be recycled,” Christiani says.

Because it is not possible to melt the different plastics together, or — at least for now — to separate the individual films from one another at recycling plants.

A 2017 cyclos-HTP study into the recyclability of conventional packaging waste concluded that a third of it was not recyclable, and only 40% of the remaining two-thirds was made into plastic recyclate. The rest was used as fuel — in other words it was incinerated.

“There was no economic or political pressure to recycle more than this amount,” Christiani says. “The prescribed recycling quotas were met, and there were not nearly enough recycling plants.” 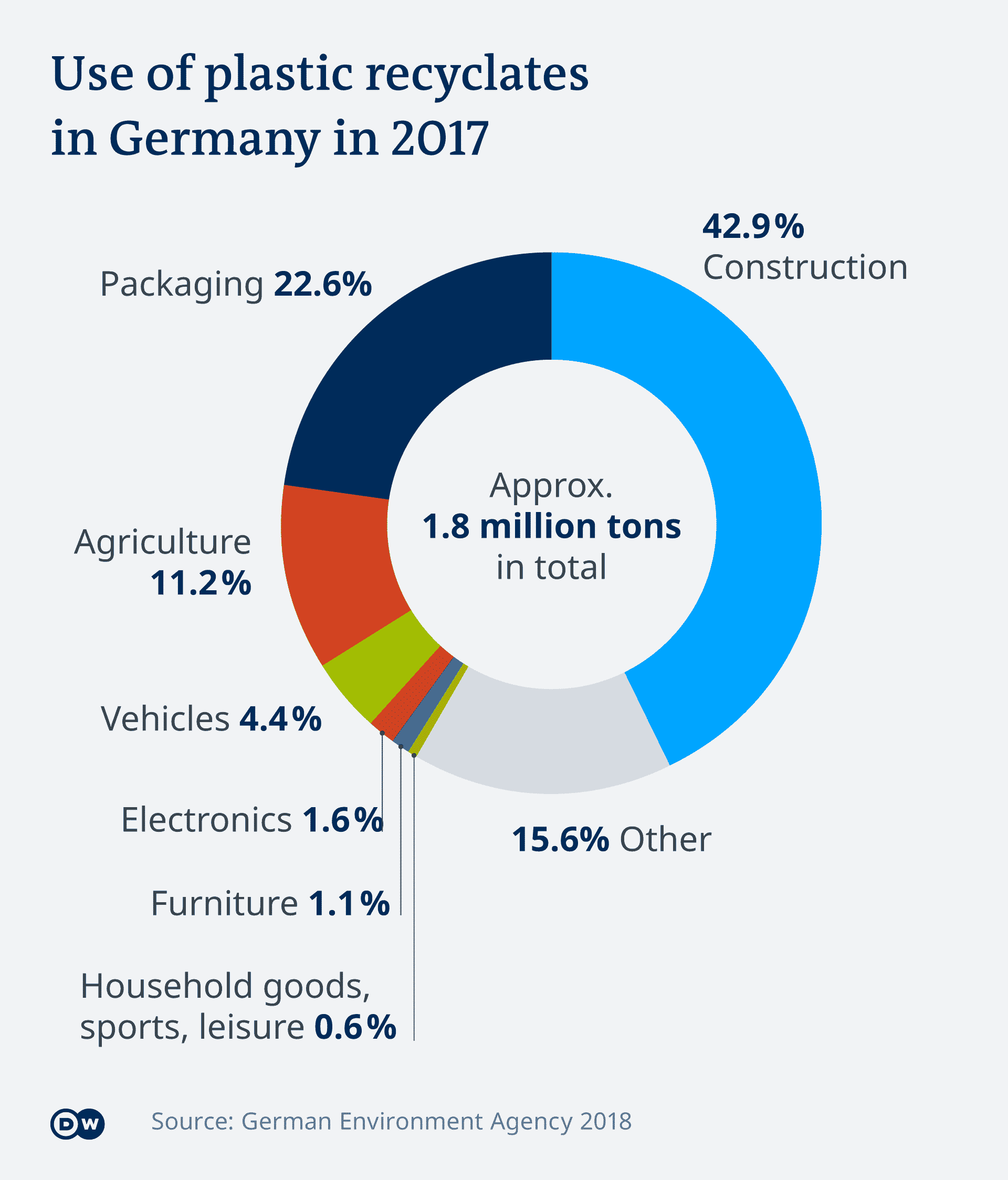 Another 2017 study by the chemical and waste disposal industry also shows that to date, Germany has not made much use of recycled plastic. According to the findings, plastic recyclate accounted for only 12% of the total amount of plastic processed in Germany — just under 1.8 million tons. The share of new plastic, on the other hand, was more than 12 million tons.

According to a 2018 survey by Germany’s vzbv consumer protection association, most consumers would like to see more plastic recycling, especially when it comes to packaging.

Although some products come in packaging that is advertised as being “made from recycled material,” Elke Salzmann, a resource protection officer with vzbv, says that can be misleading.

“It says nothing about how much recycled material the packaging actually contains,” according to Salzmann. “And it also doesn’t mean that the recycled plastic comes from collected plastic waste. It could just as well come from plastic leftovers created during the production of primary plastic.”

The term “ocean plastic,” which some textile and shoe manufacturers use to advertise the recycled plastic in their product lines, can also be misleading, Salzmann says.

Images of garbage choking our waters and killing marine wildlife have played a key role in giving plastic a negative reputation among the public, and politicians have started to act.

Many countries worldwide have introduced bans on single-use items, and in Germany, a 2019 packaging law stipulates a plastics recycling quota of 90% from 2022, up from 36%. That said, the quota only refers to how much material has to be fed into the recycling system, not how much ultimately needs to be recycled. 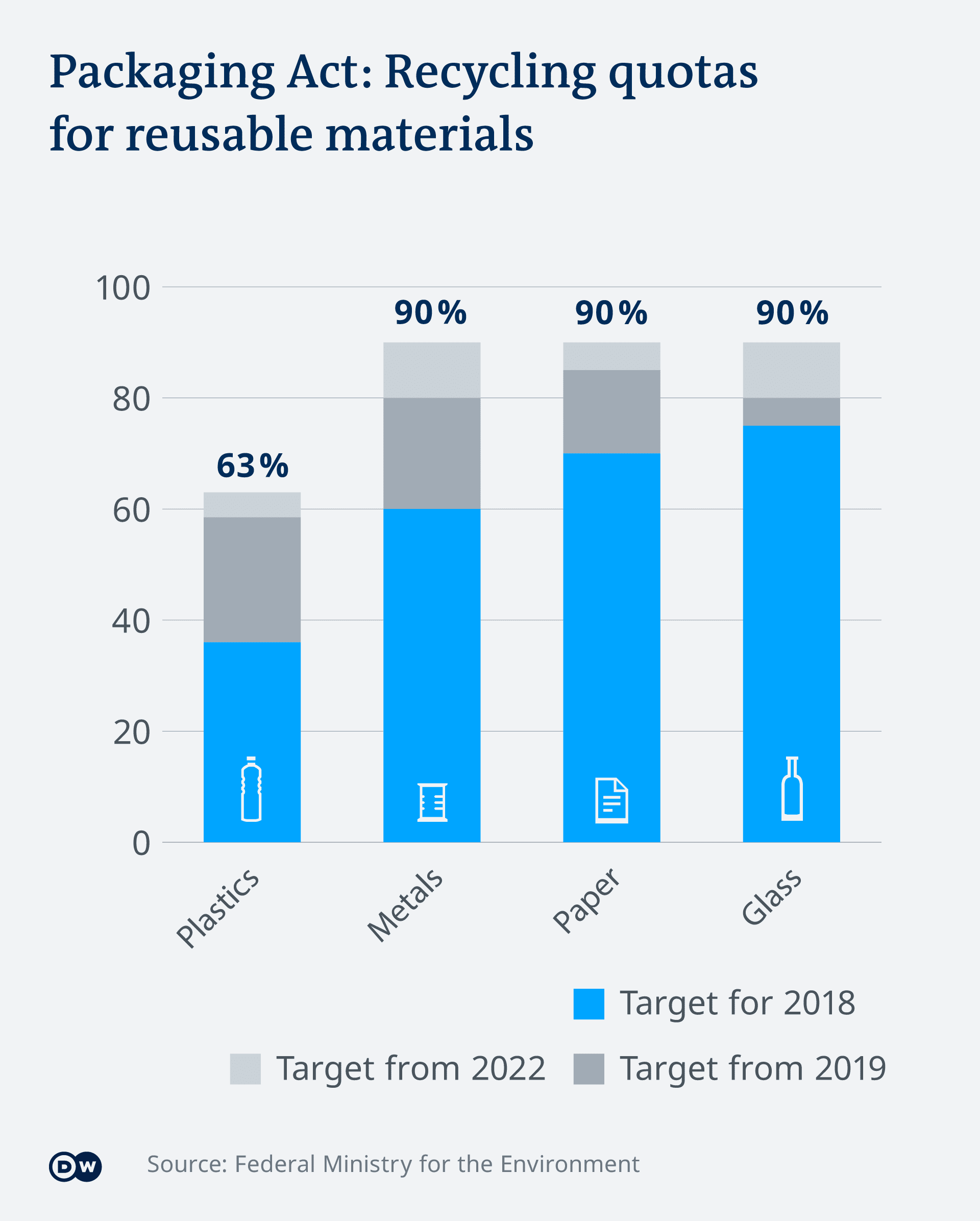 This may be addressed in future European Union legislation. As part of its “Green Deal,” the European Commission is aiming to move toward a circular economy, and has announced an action plan to conserve resources and prevent waste.

The Commission is also being advised by the European Academies Science Advisory Council (EASAC) on how to establish new rules around the use of recycled materials.

The recommendations range from landfill and export bans on plastic waste and tax rebates for recycled products, to the introduction of a plastics tax and a legal minimum quota of recycled content in packaging.

Although plastic is a very useful material, at the end of its life it causes many problems, EASAC environmental program director Michael Norton tells DW, adding that we have to rethink the whole system and completely change the way we use plastic.

Joachim Christiani says the packaging industry is starting to catch on. Around 70% of recycled mass can currently be generated from packaging, but that figure is expected to rise in the future.

“95% is quite feasible,” says the engineer, adding that sorting facilities are currently undergoing improvements, while packaging design is also changing.

Clear Plastics Are Easiest to Recycle

As things stand, PET bottles are easiest to recycle because they’re not mixed with other materials. New bottles can therefore easily be made from the old ones and the recycling rate is high. But the color of the bottle can pose a problem.

Because plastic is sorted by type rather than color, if different colors of plastic are mixed, the resulting recyclate cannot be used for light-colored packaging, which many manufacturers want. The upshot is the introduction of new plastic instead.