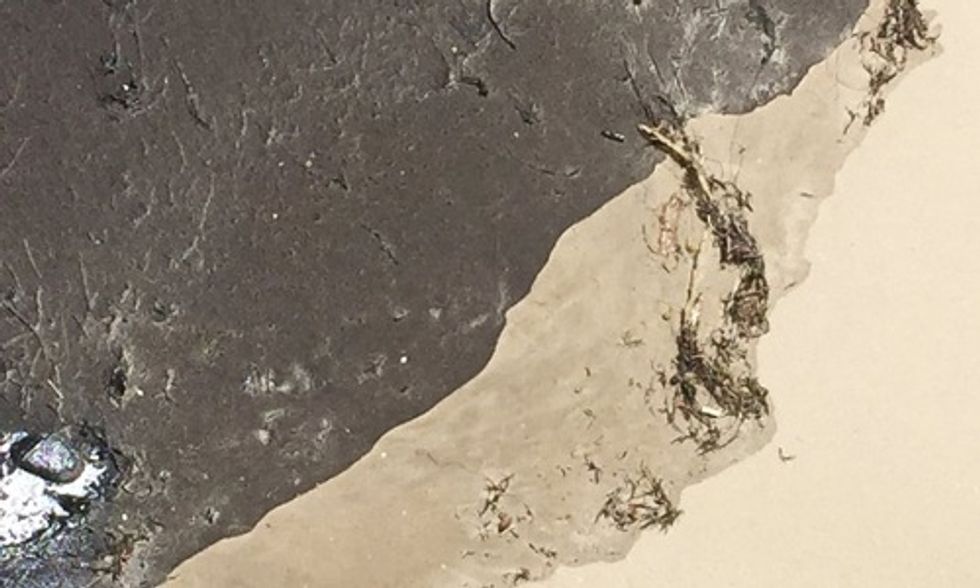 A broken pipeline spewed oil into the Pacific Ocean Tuesday, creating an oil slick four miles long on some of the state's most beautiful coastline at Refugio State Beach just north of Santa Barbara. An estimated 21,000 gallons of oil spilled, according to an early Coast Guard estimate. Refugio State Beach and area fisheries are closed, and it is unknown when the beach will reopen.

"I'm a surfer, I'm a fisherman—I like sitting out here and breathing it in," construction worker Josh Marsh, who was part of the clean-up crew, told the Los Angeles Times. "To see it like this, to see it destroyed—it hurts."

After people reported a foul smell, Santa Barbara first responders found an onshore pipeline spilling into a culvert and then into a storm drain that empties into the ocean. It was shut off by a Coast Guard crew about three hours after discovery.

“Channelkeeper is sickened to learn of the oil spill in the Santa Barbara Channel and is extremely concerned about its inevitable impacts on water quality and marine life," said Kira Redmond, executive director of the environmental watchdog group Santa Barbara Channelkeeper. "We will be out on the water to investigate the extent and impacts of the spill, monitor the containment efforts, keep the public updated, provide any assistance we can with the clean-up and ultimately ensure that the responsible party cleans up the oil that has marred our precious beaches, ocean and marine life."

That "responsible party" is Houston-based Plains All American Pipeline. It issued a statement saying, "Plains deeply regrets this release has occurred and is making every effort to limit its environmental impact."

“Oil spills are never accidents. They are the direct result of substandard oversight of fossil fuel companies who put their profits above human and environmental impacts," Greenpeace Executive Director Annie Leonard said. "Now is the time for our leaders to take responsibility for the oil companies they let run rampant in our country. This doesn't have to be our future. If our leaders don't have the courage to stand up to the oil industry, we'll continue to see spills from California to Alaska and beyond. We must demand better from President Obama as he looks forward in greenlighting risky drilling projects like Arctic drilling that endanger our oceans and the climate."

The Sierra Club said that the incident illustrates the unreliability of oil infrastructure and the danger it presents to the surrounding environment.

“Every time we hear about an oil spill, we hold our breath and hope it won't get worse," said the group's California director Kathryn Phillips. "So now we are hoping this Santa Barbara spill is rapidly contained and cleaned up. Just weeks ago, we learned that the state agencies have been allowing the oil industry to inject dirty oil waste water into clean groundwater. Now we have this spill that nobody caught until several barrels of oil had already tumbled into the ocean. How many more signals do we need from the oil industry that public health and the environment aren't at the top of its list when it decides how much to invest in creating its products? It's time we all demand better from this incredibly wealthy industry."

“Unfortunately with accidents and oil development, it is not a question of if, but of when," said Owen Bailey, executive director of the Santa Barbara-based Environmental Defense Center. "But to see this level of spill into such a sensitive and treasured environment is devastating to watch. These waters are known as the Galapagos of North America with numerous species of endangered whales migrating through marine protected areas and off the iconic and beloved Gaviota Coast."

Yesterday's spill occurred in the same oil-rich waters as a major spill in January 1969 when an offshore oil rig blew out, dumping 3 million gallons of oil into the ocean and killing thousands of seabirds and marine animals. It was the worst oil spill in U.S. waters at the time and still ranks third behind 1989's Exxon Valdez incident in Alaska and the 2010 Deepwater Horizon blowout in the Gulf of Mexico. It is widely credited with being a key impetus behind the modern environmental movement.