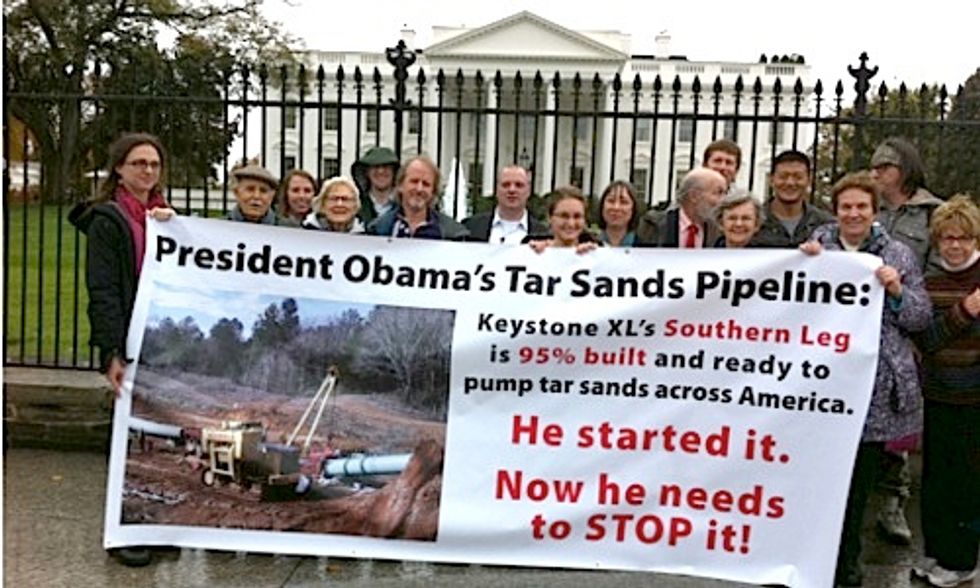 Today, climate justice leaders peaceably assembled outside the White House to demand that the Obama Administration intervene to stop the construction of the nearly completed 485-mile southern leg of the Keystone XL tar sands pipeline in Texas and Oklahoma. There to deliver a petition signed by more than 7,000 people from all 50 states, they are calling on the tar sands pipeline to be stopped in its entirety. The petition is endorsed by Daryl Hannah, Ed Begley, Jr., Mariel Hemingway, Lester Brown, Julia Butterfly Hill, Paul Hawken, James Hansen, Tim DeChristopher, Debra White Plume and many others.

The petition calls on the Obama Administration to stop the Keystone XL tar sands pipeline in its entirety. Weis pedaled the more than 7,000 signatures to D.C. to deliver to the White House.

"TransCanada's Keystone XL pipeline has destroyed my property and the future of my children and grandchildren and was approved and promoted by President Obama." said Texas landowner Michael Bishop, who won a court injunction in 2012 temporarily stopping the pipeline's construction, and has filed other lawsuits to permanently shut it down.

Tom Weis, president of Climate Crisis Solutions, who pedaled the petition more than 485 miles to the White House, played off of words the president spoke when he flew to Cushing, OK, last March to fast track construction of the pipeline's southern leg; "Today we are calling on the president to direct his administration to cut through the red tape, break through the bureaucratic hurdles, and make stopping the construction of Keystone XL's southern leg a priority, to go ahead and get it done," Weis said.

Climate justice leaders peaceably assemble outside the White House to demand that the Obama Administration stop the construction of the southern leg of the Keystone XL tar sands pipeline.

TransCanada has also taken part of Julia Trigg Crawford's family farm through eminent domain for Keystone XL's southern leg, a taking she is appealing to the Texas Supreme Court. "Today this monster pipeline lies quiet and empty beneath my family's Texas farm, and I stand firm with others in demanding it stay that way," she said. "The risks are too great to allow this pipeline to go on line and threaten our homes with toxic tar sands. President Obama, it is not too late to right this great wrong."

"I stand with Tom Weis in challenging this administration to stop speaking out of both sides of their mouth and to take a stand against this pipeline being completed," Bishop continued. "The climate crisis demands that all tar sands development in Canada be stopped. This administration must wake up to the lion at our doorstep."

"For Gulf Coast communities of color that are forced to breathe poisoned refinery air, KXL South would spell even more dangerous toxic emissions," said Tar Sands Blockade spokesperson Ron Seifert. "KXL South is an environmental justice issue, and the only way President Obama can be on the right side of justice is if he acts to block the pipeline before it goes online."

Renewing a call he originally made in 2010, when he pedaled 2,500 miles from Boulder, CO, to Washington, D.C., in support of a national goal of 100 percent renewable electricity for the U.S. by 2020, Weis concluded, "The severity of the climate crisis demands a green energy 'moon shot' for America. It's time for our generation to stand up and do something great."