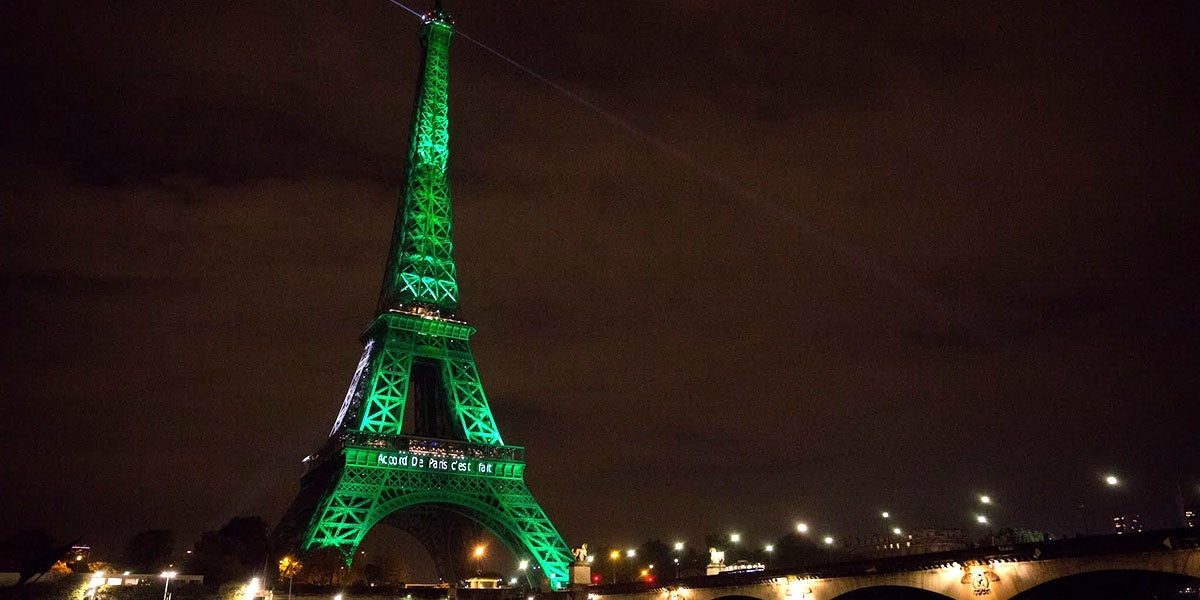 A year ago today,
President Donald Trump announced plans to withdraw the U.S. from the Paris climate agreement. His action spurred Syria and Nicaragua, the only two holdout countries, to join the landmark deal to limit warming well below the dangerous threshold of 2°C.

While the federal government falters, scores of businesses, institutions, cities and states across the nation are bucking Trump and remain committed to the goals of the global climate accord.

Today, the governors of sixteen states and Puerto Rico that make up the U.S. Climate Alliance recommitted their pledges to the Paris agreement and announced a new wave of initiatives to accelerate and scale up climate action.

“The U.S. Climate Alliance now represents 40 percent of the U.S. population and a $9 trillion economy, greater than the third-largest country in the world, and U.S. Climate Alliance states are on track to meet their share of the Paris Agreement emissions target by 2025,” the states reported.

In an op-ed published in USA TODAY, alliance co-chairs and Democratic Govs. Jerry Brown of California, Andrew Cuomo of New York and Jay Inslee of Washington explained that climate goals and economic growth can be met at the same time.

“President Trump’s announcement last year centered on his allegation that the Paris Agreement hurts the U.S. economy. The fact that our collective economies are stronger than non-alliance states proves just the opposite,” they wrote. “Alliance states are not only reducing emissions more rapidly than the rest of the country, but we are also expanding our per capita economic output twice as fast. Alliance states are attracting billions of dollars in climate and clean energy investments that have created 1.3 million clean energy jobs. The Alliance states are not alone: meeting the most ambitious goals of the Paris Agreement is projected to save the world $30 trillion in avoided economic damages.”

Some of the governors’ new measures include a commitment to reduce super pollutants such as methane, hydrofluorocarbons and black carbon. Among other initiatives, they intend to create their own “green bank” to fund sustainable infrastructure projects, a Solar Soft Costs Initiative to reduce the costs of solar projects, and a plan to accelerate deployment of zero-emissions vehicles and expand and improve mass transit.

Even though the U.S. cannot formally exit the Paris agreement until 2020, the Trump administration’s love of fossil fuels is already pushing the country’s Paris target of reducing greenhouse gas emissions 26-28 percent from 2005 levels by 2025 out of reach, the New York Times reported.

It’s clear that non-federal entities will have to continue working to fill this void. As Brown, Cuomo and Inslee wrote in their op-ed, “We will work in lockstep with the nations of the world and continue our work to uphold the Paris Agreement. However, it is clear that we cannot meet the climate challenge alone. We need commitment from every U.S. state and we need the federal government to get back in the game.”

“We invite others to join us and mark June 1 not as an anniversary of retreat, but as the moment when a bold, new movement of climate action took root in America.”

Do you know the economic benefits of climate action? We need to shift the way we think about climate #investment – it’s not just about environmental protection 🌍 but economic development, jobs, growth, resilience and increased opportunities 📈. https://t.co/nfXXUmKx52