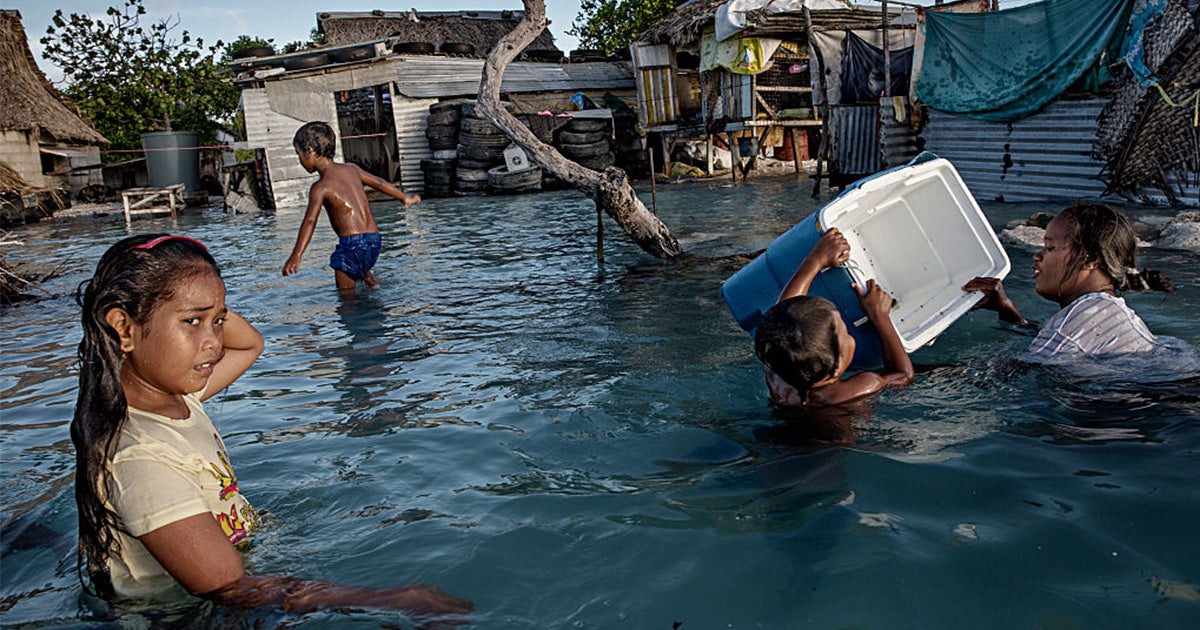 The people of Kiribati are under pressure to relocate due to sea level rise. Jonas Gratzer / LightRocket via Getty Images

A group of Pacific island nations on Tuesday declared a climate crisis and said that developed nations, in particular Australia, have so far failed to take requisite action to avert the “grave consequences” their nations face, including the prospect of their lands being “uninhabitable as early as 2030.”

The statements came in the Nadi Bay Declaration, which was signed by the leaders of Fiji, Kiribati, Nauru, Micronesia, the Marshall Islands, the Solomon Islands, Vanuatu, Timor Leste and Tonga on the second of the two-day Pacific Islands Development Forum (PIDF) Leaders’ Summit hosted by Fiji.

The declaration drew praise from Fenton Lutunatabua, regional managing director of 350.org in the Pacific, who said the statement “makes clear that the current scale of the climate crisis calls for urgent action to phase out coal and other fossil fuels.”

Among the demands of the document are a stop to all new coal mining; an end to fossil fuel subsidies; and for states to meet their obligations under the UN Framework Convention on Climate Change to protect future generations by “prevent[ing] dangerous anthropogenic interference with the climate system.”

The declaration also calls on “those governments of high emitting countries that are hindering progress in climate change efforts to heed the climate science and urgently change direction for the benefit of all, including the people in their own countries.”

Fossil fuel producers, the declaration adds, must abide by their “urgent responsibility and moral obligation” to stop development.

The Pacific nations also took a dig at Australia by calling on “relevant parties to the Kyoto Protocol to refrain from using ‘carryover credits’ as an abatement for the additional Paris Agreement emissions reduction targets.”

Australia controversially counts some emissions reductions achieved during the past decade under the Kyoto Protocol towards reduction targets set out in the Paris Agreement.

The carry-over does not breach the Paris Agreement because there has been no international consensus on the rules, but Australia’s decision to count past emissions towards new targets has been widely condemned.

350’s Lutunatabua, in his statement, suggested it was grassroots mobilization that drove the text’s strong message.

“This visionary declaration,” he said, “is a testament to the will of the Pacific people who have moved their politicians to show committed actions in confronting the climate crisis.”

“The collective futures of Pacific peoples depends on us being able to push back against the fossil fuel industry fueling this climate crisis, and towards equitable and just solutions centered on people,” said Lutunatabua. “This is what is at the heart of this important international statement.”

Richie Merzian, climate and energy program director at The Australia Institute, applauded the declaration, and pointed to its potential effect on next month‘s Pacific Islands Forum in Tuvalu.

The Nadi Bay Declaration, said Merzian, delivers “a powerful message to Australia … to lift their game on climate action.”

Australian Prime Minister Scott Morrison, Merzian predicted, “will struggle to sell a sensible and balanced approach to climate change when the Pacific have just declared a regional climate emergency.”

Reposted with permission from our media associates Common Dreams.