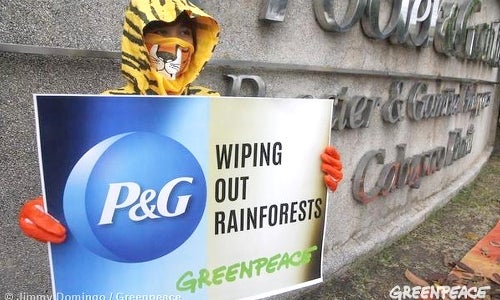 We may not see the full result for six more years, but Procter & Gamble made it official this week—the company will remove all deforestation from its palm oil supply.

The Cincinnati, OH-based company announced a no-deforestation policy for its products, which include Head & Shoulders and Oil of Olay. While the policy calls for no deforestation in the palm supply chain to plantations by 2020, the company plans to enact palm oil and palm kernel oil traceability to supplier mills by Dec. 31, 2015. 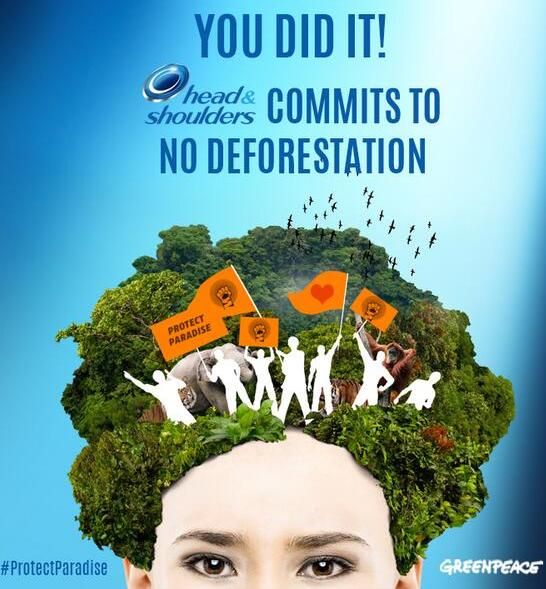 “P&G’s commitment to no deforestation in its palm supply chain is unequivocal,” P&G Vice President of Global Sustainability Len Sauers said. “Our aim is to develop effective long-term solutions to the complicated issue of palm oil sustainability.

“We are committed to driving positive change throughout the entire supply chain, not just for us, but for the industry and for the small farmers who depend on this crop.”

Palm oils are typically extracted through widespread deforestation that pushes orangutan, Sumatran tigers and other exotic animals to the brink of extinction.

The announcement comes a month after nine Greenpeace activists were arrested on burglary and vandalism charges for hanging a pair of 60-foot banners on P&G’s skyscraper to call attention to the company’s use of palm oil. While those activists still face charges, Greenpeace as an organization was pleased with the company’s policy. 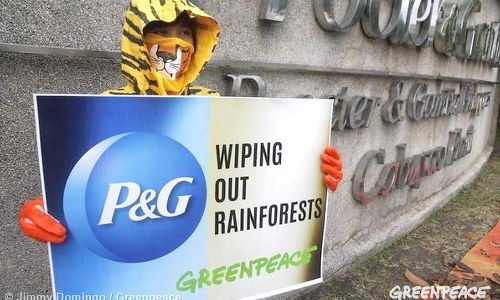 A month after Greenpeace protested at P&G’s headquarters, the company has announced a no-deforestation policy. Photo credit: Jimmy Domingo/Greenpeace

“Hundreds of thousands of people across the planet have called on P&G to get rid of palm oil that is leaving tigers and orangutans homeless,” said Areeba Hamid, a forest campaigner with Greenpeace International, according to a Greenpeace blog. “Their commitment today is another step towards responsible supply chains and ending deforestation in the world’s rainforests.”

The policy goes beyond existing criteria from the Roundtable on Sustainable Palm Oil (RSPO), according to the company. It requires suppliers to guarantee there will be no conversion of peatland, that residential rights will be valued and that high-carbon and high-conservation value areas will be protected.

Palm oil suppliers are required to submit plans by Dec. 31, 2015 to demonstrate how they will eliminate deforestation. P&G pledges to work with small farmers to improve practices for palm kernel oil.

Still, Greenpeace remained critical of the six-year window between now and the official deforestation ban date.

“The policy is not perfect,” Hamid said. “It leaves suppliers six more years to clear forests. With global warming and rapid biodiversity loss, we urge P&G to take action against suppliers, such as Musim Mas and KLK that have been identified to be clearing forests and peatlands.”

“Also for P&G to guarantee that all its products are completely free from forest destruction, it would need to implement a similar no deforestation commitment across forest commodities, that it sources apart, such as wood pulp.”

P&G says it will present reports annually to track its progress.

“This is the most complicated aspect of the palm supply chain, where P&G believes we can make a significant and lasting impact,” Sauers said.