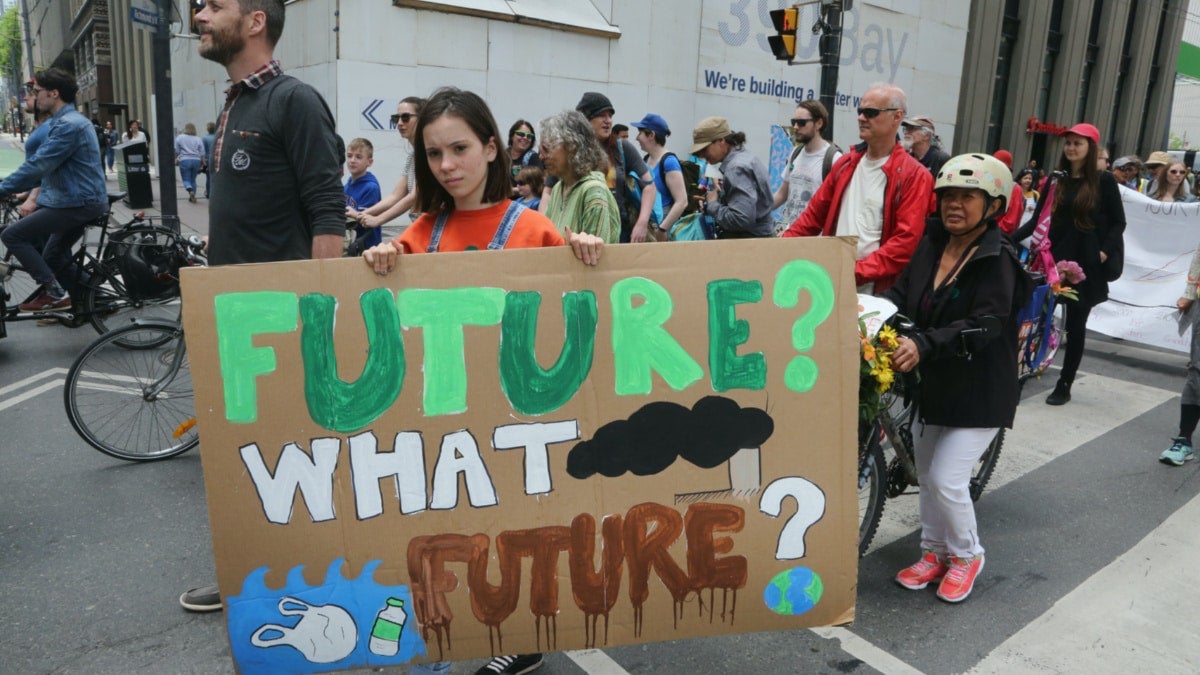 Compost. Fly less. Reduce your meat consumption. Say no to plastic. These imperatives are familiar ones in the repertoire of individual actions to reduce a person’s environmental impact. Don’t have kids, or maybe just one. This climate action appears less frequently in that repertoire, but it’s gaining currency as climate catastrophes mount. One study has shown that the reduction of greenhouse gas emissions from having one fewer child in the United States is 20 times higher—yes 2000% greater—than the impact of lifestyle changes like those listed above.

Yet opponents are quick to accuse child-free for climate advocates of racism and nativism because their aims can resemble those of forced population control. In early 2019, U.S. Rep. Alexandria Ocasio-Cortez set off a news avalanche for deeming it “legitimate” to ask whether it’s “OK to still have children” given the dire predictions for planetary climate change. As a lightning rod for conservatives, AOC got outsized attention for an idea that’s been circulating for decades, even centuries: making an ecologically minded choice to forgo reproduction.

Choice. That word introduces two knotty issues surrounding proposals to go child-free—or child-fewer—for climate. First, choice smuggles in the keyword in anti-abortion versus abortion-rights battles over reproductive liberties in the U.S. Second, it suggests that large-scale social and environmental changes rest on individuals or families acting alone. Limiting one’s sights to individual choice passes over the structures within which those choices occur and the histories of gender and racial injustice that shape them—structures and histories that effectively prevent actual choice. The solution, then, lies in viewing reproductive justice through a framework that prioritizes bodily self-determination.

The Stickiness of Population

Only five years ago, there was minimal coverage of the child-free for climate movement. AOC is just one of many reasons it’s lighting up now. New scientific analyses, scholarly debates, and social media conversations have shined a light on reproduction and climate. The influential Project Drawdown framework for climate mitigation includes a list of solutions ranked by their potential impact, two of which—educating girls and providing access to family planning—they project will have a greater combined impact on reducing greenhouse gas emissions than almost all other climate solutions because of their effect on fertility rates.

In January 2020, 11,000 scientists signed onto a study that warned about the unfolding climate emergency. The authors prescribe steps in six sectors that can prevent irreversible planetary collapse, including that “the world population must be stabilized—and, ideally, gradually reduced—within a framework that ensures social integrity.” The framework they propose includes universal access to family planning as well as education and equity for young women. (Other scientific takes on population-based climate actions are more skeptical about their immediate impact given the scale of fertility reductions needed to balance out longer lifespans.)

Even before 2020, a new movement was afoot to address climate by forgoing reproduction. Blythe Pepino, a British musician in her 30s, formed BirthStrike in 2018 to build a community of people—typically women-identified—who have opted not to reproduce in response to the ecological and social crises that climate change is creating. In the wake of the Black Lives Matter protests this summer, the group recognized the need to acknowledge the oppression that colors conversations about reproduction as it relates to climate and so reformed itself into a support group for those grieving parenthood. Their new stated goal is to channel that loss into action on climate justice.

Organizations such as Conceivable Future, however, continue to keep reproduction at the fore. Led by climate activists Meghan Kallman and Josephine Ferorelli, Conceivable Future is raising awareness about how the climate crisis affects “intimate choices” like reproduction. The Conceivable Future and now-defunct BirthStrike campaigns share ideological terrain with “population engineers,” a group of bioethicists who forward policies for limiting the size of the global population through positive incentives like family planning classes and negative ones such as taxes on wealthy procreators.

In proposing specific policies rather than individual action, population engineers acknowledge the structures within which reproductive choices occur, everything from media influence to the tax code. Even with this shift to the structural, however, the racist, sexist, colonialist, and nativist legacies of the population question within environmentalism still plague child-free for climate. As do the historical and social injustices that constrain so-called choices.

Racism and Xenophobia in Environmentalism

This summer and fall, the climate crisis and its correlated catastrophes—extreme heat, flooding, wildfires—are intensifying alongside Black Lives Matter uprisings and the coronavirus health disparities among Black, Indigenous, and Latinx populations. This confluence has brought overdue attention to racism in environmentalism, as evidenced by the Audubon Society’s recent reckoning with racial injustices in its past and present, including publicizing that its famed founder was a White supremacist and a slaveholder. The intersections of climate justice and racial justice have also come to the fore through studies of how Black communities are greatly harmed by hotter temperatures and through the popular intersectional environmentalist platform created by Leah Thomas, a young Black activist and “eco-communicator.” To these reckonings we need to add the racism and xenophobia that have long characterized environmentally motivated population controls.

The New York Times recently exposed these sins in a profile of Cordelia Scaife May, showing how this heir to the Mellon fortune converted a love of birding into a network of anti-immigration, pro-population-control organizations that still influence politics today. In the 1960s May linked threatened birdlife to the rapidly expanding human population. May wasn’t wrong to see and worry over this link: A host of human activities—from toxic agriculture and industry to sprawling settlements and light and noise pollution—decimate avian habitats and habits. May’s anti-immigration approach, however, indicates how readily environmentalism can mutate into racist and xenophobic actions.

The Times investigators show that “protecting natural habitats and helping women prevent unplanned pregnancies merged over time into a single goal of preserving the environment by discouraging offspring altogether.” Taken on its own, this goal resonates with Conceivable Future’s and population engineers’ aims. To be clear, this does not mean that today’s child-free climate advocates are racist nativists. However, it does indicate how readily the affiliation arises because of the ugly history of forced population control.

And this history is hardly past. For example, race and class conflicts erupted around a population platform within the Sierra Club only 15 years ago. In 2004, a faction of club members took a page from May and argued that more people living in the U.S. meant more encroachment on less developed land and water. As with May’s effort, this anti-immigration push amounted to “the greening of hate,” according to the Southern Poverty Law Center and Anti-Defamation League, who entered the dispute when they found White supremacists lobbying for anti-immigration Sierra Club board candidates. A 2010 SPLC report firms up the connection between environmentalist intentions and racist agendas by explaining why White nationalist John Tanton infiltrated the club: “Using an organization perceived by the public as part of the liberal left would insulate nativists from charges of racism—charges that … would likely otherwise stick.”

Charges of racism ultimately did stick to Tanton and his anti-immigration, pro-population-control allies. And they continue to stick in analyses of the child-free for climate movement today. Earlier this year, climate journalist Meehan Crist took up AOC’s question of whether it’s OK to have a child. In arriving at an answer (for her, yes), she affiliates child-free positions with “anti-feminist, racist and anti-human” values and with bad science. “Darker visions” proceed from this analysis, she writes, visions of those who believe “racial purity will save the planet. Closed borders. . . . Ecofascist death squads.” The dark visions Crist spins from the child-free for climate question underscore how readily calls for reproductive limits touch the third rails of modern environmentalism: racism, eugenics, xenophobia, even death-dealing.

We get even closer to these third rails when we consider that the question of whether to reproduce is, for some people, no choice at all. Modern efforts to limit fertility, which ramped up after World War II, have targeted poor women in the Global South, and Black, Indigenous, and people of color in the U.S. using coercion and force. BIPOC reproductive justice advocates such as Loretta Ross have condemned dichotomous pro-abortion-rights versus anti-abortion politics for producing “anemic political analyses” that ignore the reality of forced sterilizations in prisons and the appallingly high maternal mortality rate for Black women in the U.S. These are all forms of what medical historian and ethicist Harriet Washington calls “medical apartheid.”

This oppression has been used “as a means of controlling ‘undesirable’ populations—immigrants, people of color, poor people, unmarried mothers, the disabled, the mentally ill.” Recent events confirm this isn’t a historical anomaly. In September, accusations of nonconsensual hysterectomies and other procedures in an ICE detention center reestablished that, when it comes to women’s health, “choice” comes with the privileges of race, class, and citizenship status.

When we debate climate actions, we often focus on feasibility, economics, and political and popular support. But grim histories also travel with climate proposals: histories of environmentalist racism and of reproductive violence against poor, BIPOC, and other marginalized people in the U.S. and abroad. This shouldn’t squelch conversations about child-free for climate. We should take it seriously, but if it is to go from being an expression of individualist privilege to part of a wider debate, we must wrestle with the observation by science studies scholar Michelle Murphy that “race is the grammar and ghost of population.” Only through nuanced attention to the histories, values, and associations attaching to climate actions can we hope to sustain dialogue about which ones—whether they be child-free or the Green New Deal—are just and efficacious in these critical times, while keeping reproduction and family part of the climate conversation.

Heather Houser writes on the environment, contemporary culture, and science and technology. She’s an associate professor of English at The University of Texas at Austin, and her most recent book is Infowhelm: Environmental Art and Literature in an Age of Data (Columbia University Press, 2020).

Reposted with permission from Yes! Magazine.