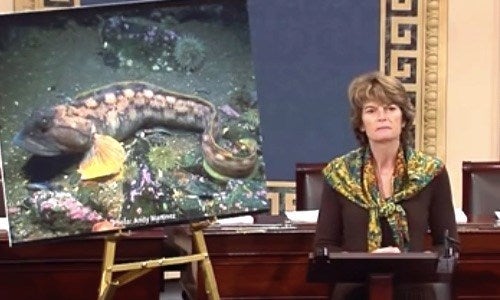 Dr. Robert Califf, the Obama administration’s choice for the next commissioner of the U.S. Food and Drug Administration (FDA), was easily approved by the Senate Health, Education, Labor and Pensions Committee Tuesday, but the candidate’s approval by the full Senate faces an unlikely hurdle: fish.

Republican Sen. Lisa Murkowski of Alaska is threatening to block Califf over the FDA’s approval of genetically engineered salmon, or GMO salmon.

I cont'd my fight against GE salmon by moving forward w/my hold on the nom. of Dr. Califf to be FDA Commissioner.https://t.co/4Y20Zms2vf

In November, the FDA approved the first genetically engineered food animal. AquaBounty’s GMO salmon—dubbed “Frankenfish” by opponents—is genetically altered to grow to market size in half the time of conventional salmon. The FDA did not require the product to carry a label, making it difficult for consumers to distinguish between non-GMO and GMO salmon.

Murkowski made it clear she is not happy with the FDA’s decision. According to The New York Times, “She said she would put a hold on Dr. Califf’s candidacy because the FDA approved a genetically engineered salmon for consumption days after she questioned him on the topic at his confirmation hearing in November.”

Califf, a former Duke University researcher and cardiologist, is currently the deputy commissioner of the FDA.

“If they are trying to get my support, they sure fumbled that ball,” she said after the Senate committee approved the nomination on a voice vote.

Murkowski comes from a major salmon-producing state and has been adamantly opposed to GMO salmon. Here is the senator speaking on the Senate floor in November against the fish.

“I will not stand back and just watch these genetically engineered creatures be placed in our kitchens and on our tables without a fight,” she said in a statement following the after FDA’s approval of GMO salmon. “I am furious about this decision, but now I must do everything I can to make sure it is labeled—consumers have a right to know what it is they are eating.”

Besides threatening to block Califf’s confirmation, Murkowski “helped insert language last month in a massive federal spending bill, directing FDA to prevent the AquaBounty product from reaching the U.S. market until regulators finalize labeling guidelines. It also tells the agency to spend ‘not less than $150,000’ on that effort,” The Washington Post reported.

On Tuesday, the senator said she wants to make sure FDA knows that “voluntarily labeling is not adequate. I’m going to be pushing for further conversations with Dr. Califf on this.”

She also tweeted: “I look forward to having conversations w/FDA on Frankenfish, but I intend to block Califf’s confirmation until these issues are resolved.”

I look forward to having conversations w/FDA on Frankenfish, but I intend to block Califf’s confirmation until these issues are resolved.

As it happens, Califf’s confirmation also has another roadblock: Vermont Sen. Bernie Sanders.

The Democratic presidential candidate has threatened to block the nominee due to Califf’s ties to industry. According to the Associated Press:

In 2006, Califf founded the Duke University Clinical Research Institute, a contract research group that has conducted studies for virtually all of the world’s largest drugmakers. Government disclosure forms show that Califf received more than $29,000 in consulting fees, travel, meals and other payments from drugmakers in 2014.

Sanders has said that the country needs an FDA commissioner who will stand up to the pharmaceutical industry and that Califf is “not that person.”