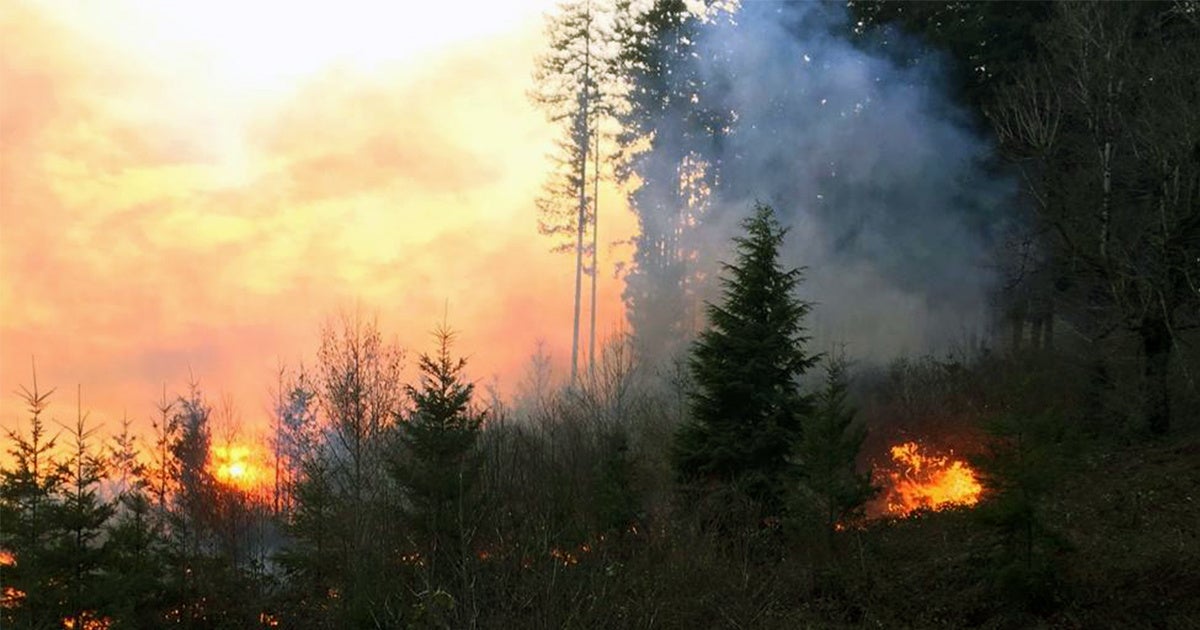 The initial cause of the fire was not yet known, but it has been driven by the strong wind and jumped the North Santiam River, The Salem Statesman Journal reported. As of Tuesday night, it threatened around 35 homes and 30 buildings, and was 20 percent contained.

“It was a big shock, especially around here,” Lyons resident Brianna Schott, who was forced to evacuate, told the Salem Statesman Journal. “We’ve had little field fires, but this is the biggest event I can remember. We just had snow, and now this?”

Another Lyons resident, Bryan Wolf, said he hadn’t seen a wildfire like this since moving to Lyons in 2002.

“They called us on the home phone here and told us to evacuate twice,” Wolf told the Salem Statesman Journal. “We just thought we’d stay put for a little while, keep our eye on it because the wind was still blowing to the east and the fire was headed down river. Once the wind slacked up a little bit, it started coming back and burning more vegetation close to the river, and it got to be a little bit scary for us. The firefighters showed up with their engine and pumper and we felt pretty secure after that.”

The length of the wildfire season in the Western U.S. has increased due to warmer temperatures and earlier snowmelt, the National Climate Assessment found. The Northwest has warmed nearly two degrees Fahrenheit since 1900, which is at least partly attributable to human-caused climate change, the assessment further found. According to Climate Central’s States at Risk, the area burned by fires in Oregon each year has increased around 18 times in the last decade compared to an average year in the 1970s. More than 1.2 million Oregonians, or 33 percent of the state’s population, live in areas with increased fire risk.

The Salem Statesman Journal explained the progression of Tuesday’s fire:

A grass fire was reported Tuesday afternoon near North Santiam State Park between Mehama and Mill City on the Marion County side of the North Santiam River.

An emergency citizen alert was issued about 3 p.m. for those who live in the area to evacuate.

Hours later another grass fire was spotted near Gates on Garden Lane separate from the Santiam State Park fire. That fire required no evacuations.

Then, another grass fire was reported about 5 p.m. near Neighbors Lane in Lyons, and those within a 3/4-mile radius were asked to evacuate.

The Santiam Park fire and Neighbors Lane fire merged due to strong winds in the area.

“We ask that you please stay clear of the area and that if you were asked to evacuate to please do so,” the Linn County Sheriff’s Office wrote in a Facebook post.

The Red Cross has designated the Mari-Linn Elementary School as an evacuation center.

“At this time it is not expected that the evacuation will be lifted for at least the next 24 hours. If you would like to help those displaced you may do so by bringing food, water, supplies to the school,” the sheriff’s office said.