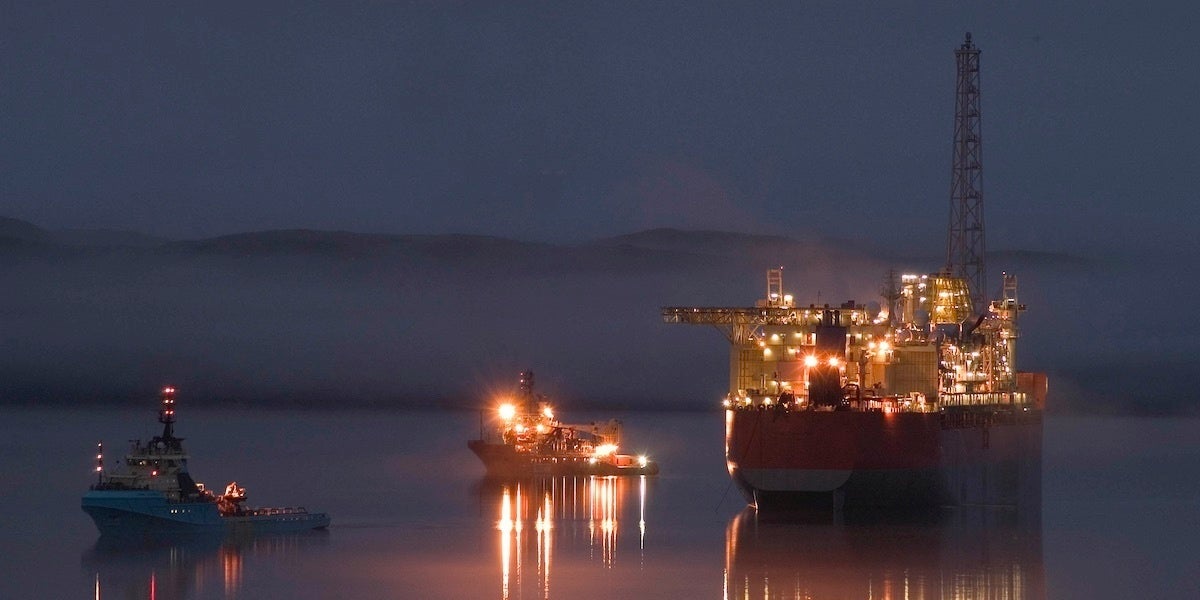 An estimated 250,000 liters (66,000 gallons) of
crude spilled from the SeaRose FPSO, a floating production, storage and offloading vessel, in the White Rose oil and gas field off the coast of Newfoundland, Canada.

Husky Energy, the operator responsible, said the spill happened on Friday when the SeaRose FPSO “experienced a loss of pressure” in an oil flowline, according to the Canadian Press.

The incident occurred while Husky was preparing to restart production that was halted on Thursday due to bad weather.

Federal-provincial regulators said Sunday “there is no reason to believe … that this is an ongoing spill, and it is believed to be a ‘batch spill.'”

However, Natural Resources Minister Siobhan Coady told CBC’s St. John’s Morning Show Monday there is no way to be sure that the leak has been contained, as poor weather conditions and rough seas have made it impossible to send remotely operated underwater vehicles to take stock of the damage.

“This is an ongoing situation,” she said. “The consideration of how much oil has been let go and what the effects are of this spill is ongoing.”

UPDATE: The largest oil spill in the history of the Newfoundland offshore happened on Friday, 250,000 litres. Many questions but both the offshore regulator @CNLOPB and @HuskyEnergy informed me will not be doing media interviews https://t.co/i8tZ9aq8sq @CBCNL #nlpoli @CBCAlerts

Husky has shut-in and secured all of its wells and halted production and drilling operations,
according to the Canada-Newfoundland and Labrador Offshore Petroleum Board (C-NLOPB), the federal agency that regulates the area’s petroleum production. The regulator has launched a formal investigation into the spill and will release its findings when available.

The spill, however, “showed that the risks in offshore oil activity can never be underestimated, especially in our harsh environment,” the board noted. It said the storm that rolled through last week was “the worst this region has seen offshore since the Ocean Ranger disaster in 1982.”

Four surveillance flights and an offshore support vessel have been deployed since Friday to help assess the extent of the spill and to look for any effects on wildlife, the C-NLOPB said. So far, no marine life or seabirds in the vicinity of the spill and its trajectory appear to be affected, it added.

But Bill Montevecchi, who studies seabirds at Newfoundland’s Memorial University, expressed concern over the area’s wildlife, which could include tens of thousands of murres and dovekies, the CBC reported. He warned that the free-floating oil could separate the seabirds’ plumage, meaning cold water could penetrate to the birds’ skin and cause them to freeze to death.

He added that Husky should not have resumed production during inclement weather.

“What we’re seeing is not an accident. It is the outcome of weak regulation,” he told the CBC. “The platform, which had shut down presumably because of storm sea conditions on the Grand Bank, was then going back into operation at a time when clearly it should not have been doing that.”

“It’s like playing Russian roulette and the bullet just happened to be in the chamber on this one. That should not be an option,” Montevecchi said.