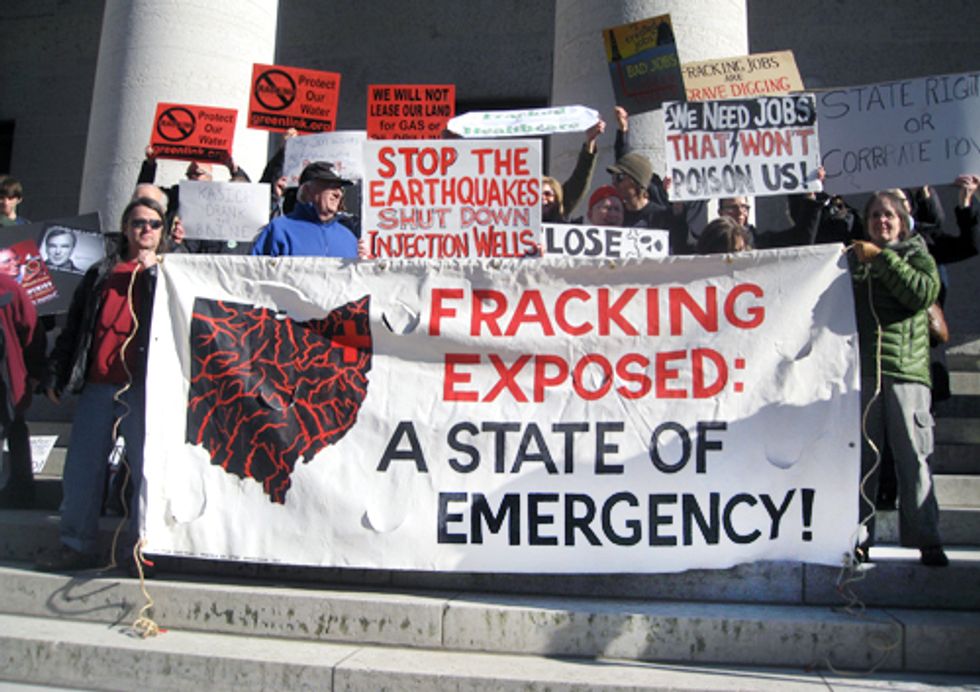 On Jan. 10, more than 250 Ohioans assembled on the west lawn of the Ohio Statehouse to voice their opposition to hydraulic fracturing—better known as fracking—and deep injection wastewater disposal wells.

Leading the charge was State Rep. Robert Hagan (D-Youngstown), who last week called on Gov. John Kasich (R-OH) in a letter to implement an indefinite moratorium on D&L Energy's deep injection wells in Youngstown, Ohio, which has been rocked 11 times in the past nine months by earthquakes. Seismic surveys have corroborated that the two most recent earthquakes—on Christmas Eve and a 4.0 magnitude quake on New Year's Eve—had epicenters near D&L's deep injection wells.

Rep. Hagan called on Gov. Kasich to institute a moratorium on all deep injection wells within a five mile radius of the Youngstown site until Ohioans can be guaranteed that no correlation exists between the disposal wells and danger to the natural environment or human health.

“The people of Ohio and the people of the Mahoning Valley need answers from our government officials," said Rep. Hagan. "We need to know why over half of the toxic frack water we are blasting into Ohio lands is coming from Pennsylvania. We need to know why there is such a rush to dump this waste in Ohio. And we need to know why it took ten earthquakes in ten months for anyone in the Kasich administration to wake up and respond to calls for a moratorium on these wells. We never had an earthquake in Youngstown until John Kasich was elected governor.”

"What has occurred in the Mahoning Valley is deeply troubling," said State Rep. Tracy Heard (D-26). "It's evidently clear we must take a step back and examine fracking, not only the process but its potential impacts to our environment both long-term and short-term. I stand ready to work with my colleagues to find a solution that will protect the citizens of Ohio and our environment."

“Creating jobs at the expense of human health and the environment is not sustainable," said Stefanie Penn Spear, executive director of EcoWatch. "Ohio needs to bring back the incentives for renewable energy projects that support Ohio’s energy bill SB 221. Investment in renewable energy will create green jobs, revitalize our strong manufacturing base and provide long-term solutions to our energy needs without contaminating our drinking water, polluting our air, displacing communities and making people sick.”

Other speakers at today's event included:

Today's speakers called on Gov. Kasich to protect the environment and public health by passing SB 213/HB 345, which would impose a moratorium on fracking permits and wastewater disposal injection wells. Currently, Ohio is home to 177 deep injection well sites.

The protest was organized by NO FRACK OHIO, a collaboration of more than 50 grassroots and conservation groups calling for further safeguards on horizontal hydraulic fracturing.