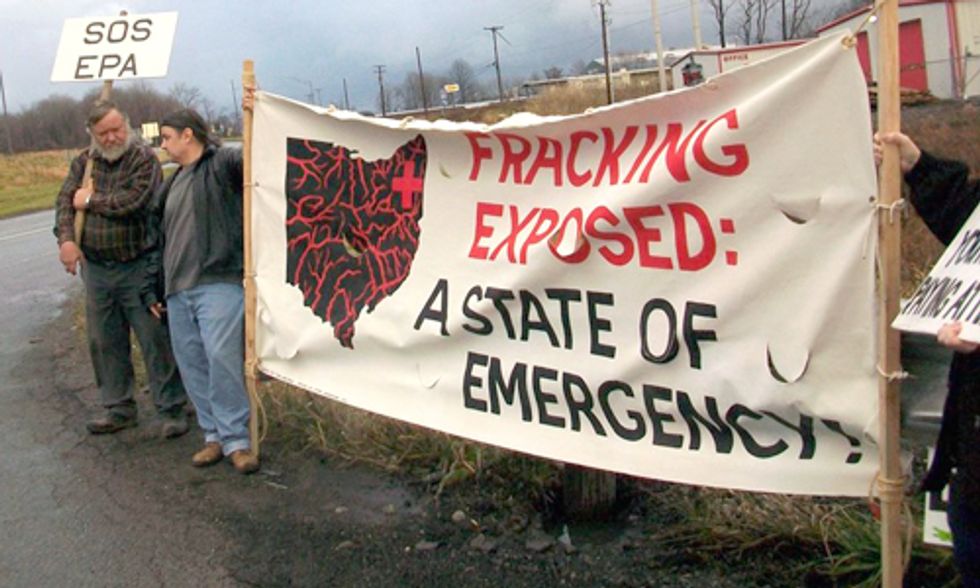 Some things are always worth fighting for, especially clean air and water.

Those fights can be tough, too, particularly when your own city and its residents refuse to let go of a profitable but dangerous practice like fracking. For the third time in the past year, voters in Youngstown, OH voted against a fracking ban.

Voters there struck down the ban by 8.5 percentage points, according to results from the Mahoning County Board of Elections.

Fracking opposers in Youngstown, OH aren't done fighting yet, despite their fracking ban being voted down for the third time in a year. Photo credit: Ohio Fracktion

The members of the Community Bill of Rights Committee that led the fight were disappointed, but not beaten down. They're not sure if the fourth time will be a charm, but the members will make a future return to the ballot.

"We'll put it on again," committee member Susie Beiersdorfer told the Youngstown Vindicator. "It doesn’t matter how many times we have to fight for our inalienable rights to clean water and clean air.”

The committee could be enthused by gradual improvements each time its measure hits the ballot. The ban lost by 13.7 percent in May 2013 and by 9.7 percentage points in November.

Predictably, the Ohio Oil and Gas Association has no interest in dragging this out any further.

“It is time to move past this debate and get back to the business at hand, which is making sure the hardworking folks in Youngstown continue to have economic opportunities being brought forward by shale development,” Ohio Oil and Gas Association spokesman Mike Chadsey said. "They sure are wasting a lot of people’s time and money.”

John A. McNally, the city's mayor, viewed the ban purely as a "job killer," as opposed to a way to clean up his town's environment. He added that he didn't think the ban would have been enforceable any way because the Ohio Department of Natural Resources controls fracking in the state.

Campaign also played a role in the loss. The Vindicator found that the local Plumbers and Pipefitters union spent nearly $35,000 more than the committee pushing for a fracking ban, as of April 16.

Fracking bans have been much more successful on the West Coast. Beverly Hills became the first city in its state to pass an official ban, while Los Angeles approved a fracking moratorium a couple months earlier.

A ban was also passed this year in Fort Collins, CO.

Just a month ago, a coalition of local, statewide and national groups against fracking gathered at the Ohio Statehouse for “Don’t Waste Ohio” Legislator Accountability Day.