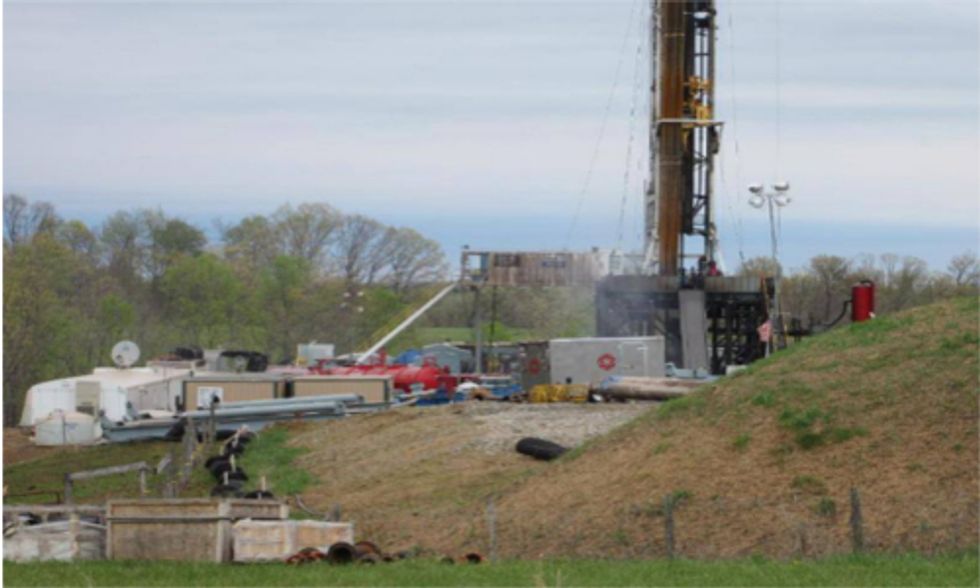 The Government Accountability Office (GAO) released a new report this week showing that Ohio was the only state among eight studied that allows waste fluids from oil and gas wells to be disposed of without disclosure of the chemicals it contains.

This fracking operation in southeast Ohio doesn't have to disclosure the chemicals in its waste fluids, thanks to weak state reporting requirements. Photo Credit: Buckeye Forest Council

The report, created as a request by seven Democratic U.S. Senators and Congresspersons, studied eight states where fracking has become widespread—California, Colorado, Kentucky, North Dakota, Ohio, Oklahoma, Pennsylvania and Texas. All but Ohio required waste disposal companies to provide information on the waste content before getting a permit to dispose of it, primarily in injection wells deep underground.

"According to officials, class II injection well operators [in Ohio] are not required to analyze the chemical composition of injected fluids," says the GAO report. "The division has supported research to analyze produced water samples from oil and gas producing formations. In addition, operators may monitor the specific gravity of fluids when applying to increase permitted injection pressure limits. The division may sample injection fluids at any time during injection operations."

In other words, the operators and the ODNR may monitor the chemical content if they feel like it but they don't have to.

Ohioans, concerned about the potential of fracking waste contaminating drinking water despite alleged safeguards, said this confirms their long-time belief that oversight at the ODNR is deficient.

“This report clearly supports what communities have known for years: Ohio’s huge injection well industry—which takes a huge amount of waste daily, most of which is from out-of-state—has minimal regulation that is simply not up to the task of protecting Ohio’s drinking water," said Teresa Mills, consultant for the Buckeye Forest Council. "It is a system designed by and for the oil and gas industry that no citizen has any reason to trust.” Mills also points out that radioactive isotopes contained in the waste fluids are not even mentioned in the report.

“ODNR’s own statistics say that it has permitted over 240 injection wells while the neighboring states of Pennsylvania and West Virginia that frack extensively have far fewer injection wells," said Roxanne Groff, a township trustee in Bern Township, located in Ohio's fracking heartland in southeast Ohio. "Most of the contaminated waste fluids from those states is shipped to Ohio for injection."

She referred to Ohio Senate Bill 315, passed in May 2012, which includes a provision (section 1510-9) that allows companies to exempt themselves from disclosing chemicals to the state by declaring them a "trade secret," a piece of "model legislation" drafted by corporate lobbying group the American Legislative Exchange Council (ALEC).

“Chemical secrecy has been the oil and gas industry’s goal from the beginning and they’ve achieved more secrecy in Ohio than any other state,” said Groff.

It's just another front in Ohio's war on clean energy under Gov. John Kasich. In June, the state became the first in the country to freeze renewable energy standards, and a bill to repeal them permanently is circulating for sponsors in the legislature. The Ohio Senate passed a resolution early this year urging that LEED green building standards not be used in government buildings.